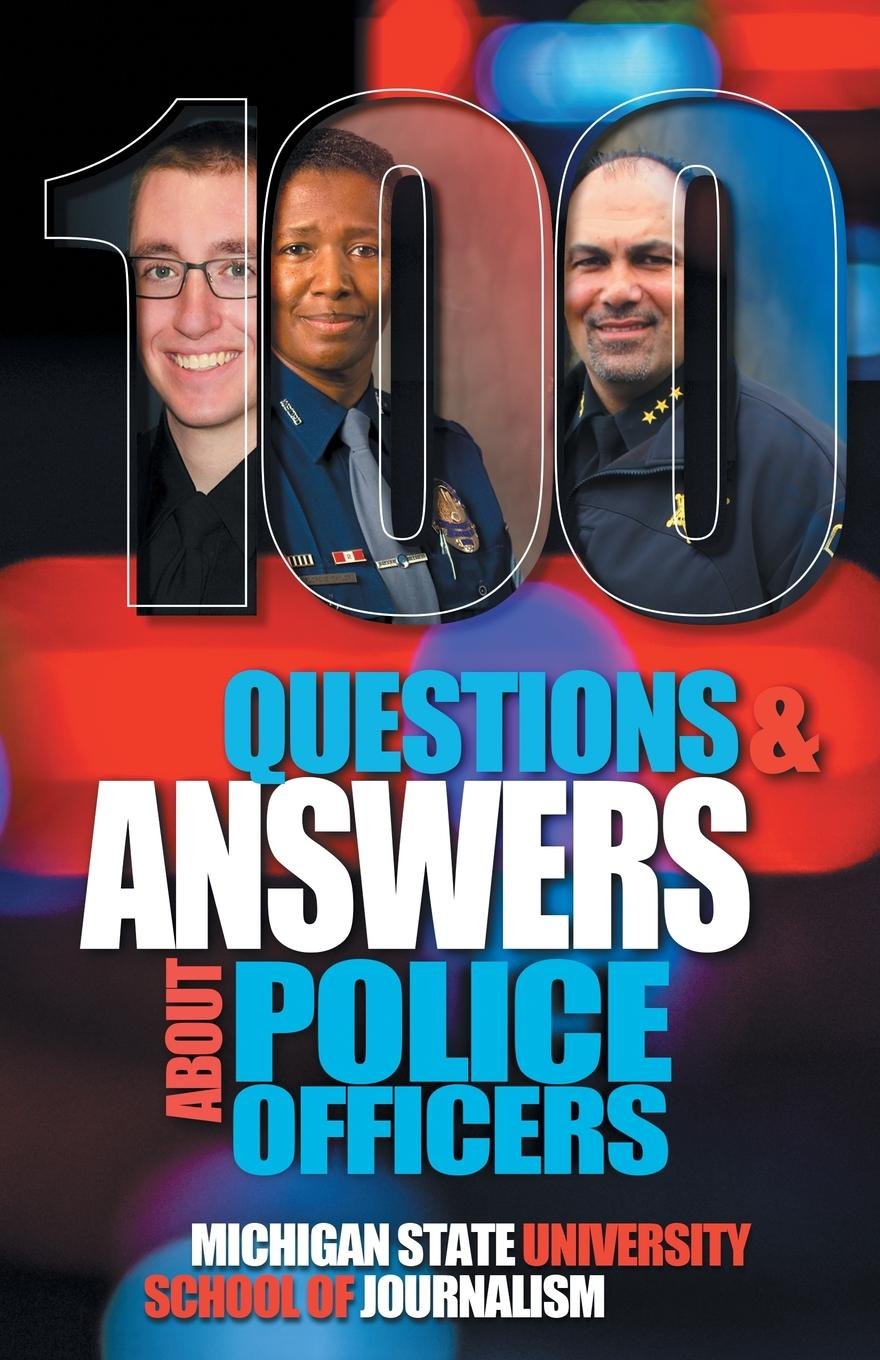 The center photo on our new cover is Sgt. Florene McGlothian-Taylor. Click the cover to visit the book’s Amazon page.

For one thing, people wonder how police fit into our Bias Busters series of guides that now cover 13 subjects. For another, the guide demonstrates the flexibility of Front Edge Publishing, which seamlessly produced two simultaneous editions.

The subject for this new guide was proposed by Sgt. Florene McGlothian-Taylor, the first person to lead the Michigan State University Police Department’s Inclusion and Anti-Bias Unit. She had long been placing copies of the cultural competence guides, produced in the MSU School of Journalism, in the police department’s lobby. Guides have covered racial and ethnic groups such as Hispanic, Black and Arab Americans, as well as religious groups, such as American Jews and Muslims.

McGlothian-Taylor reasoned that a guide about MSU police was needed, too. She was raising a new idea for our School of Journalism team to consider.

Why This Guide to Police Is So Important

Police do not fit the traditional demographics of race, ethnicity and religion. However, they are the subject of bias, rumor and stereotype that should be explored.

Police also share some characteristics through their training, experience and ethics. They have a shared language, traditions and a common bond. In these ways, police are an occupational culture group similar to veterans, and the Bias Busters series had already covered them.

Here was the challenge in McGlothian-Taylor’s idea: Scale! Veterans number about 20 million, while there are fewer than 100 MSU police officers.

How would it make sense to produce a book about this much smaller group?

These books can be modified for police year you

Every local agency, including police, deputies and tribal police, is a subset of the much larger whole. The Front Edge solution was to create a guide about local policing generally—and to simultaneously produce  a custom edition with a section specific to a single agency. The custom guide includes a letter by MSU Police Chief and Director James H. Dunlop and details the department’s mission, goals, history and even local contact information. The cover of that edition carries the department’s logo. This edition is published only for the Michigan State Police Department.

It was a simple matter for Front Edge Publishing to use the main body of the guide, without the MSU-only pages, as the national edition available on Amazon. Both guides went to press at the same time. Now, any department that wants its own custom guide for its community outreach work, can create a guide with its own messaging at a reasonable cost.

There could be countless custom editions of the 100-question guide. Because of Front Edge’s flexibility, these guides also can be updated, when necessary.

Collaboration on Flexible Editions Helped Everyone

Once McGlothian-Taylor and Front Edge Publishing turned our thinking around about how guides could be made, it opened the door to an extensive collaboration that ensured the guides were authentic and accurate. With a whole police department right across the street as partners, the journalism class that creates the guides had McGlothian-Taylor visiting the classroom, trips to the police department, access to police patrol ride-alongs and dozens more allies than we usually get to help check the guide. As it turns out, McGlothian-Taylor and some of her colleagues are very good editors.

The police did not flinch when the students’ reporting led them to questions and answers about controversial, timely subjects such as staffing cutbacks, mental health, use of force, profiling and corruption.

Officers from other departments, journalists and instructors also advised. The guide has extensive new research from the non-partisan Pew Research Center and some from the Michigan Commission on Law Enforcement Standards. That kind of backup is essential in the guides.

The police also produced material that otherwise would have been nearly impossible to get. This included some dynamic videos in which officers explain bike and K-9 units and access to police equipment we could show to answer questions people have about that.

You can see the bike video here:

Because Front Edge Publishing made small-batch publishing practical, we now have a flexible publishing model that can scale national-level publishing to specific local audiences.

On the press now in the Bias Busters series is a guide about sexual orientation, a companion to the series guide about gender identity. Then, we will publish one about Chaldean Americans, an important group of Iraqi Catholics who have been thrust onto the national stage by extremists, immigration and deportation debates.

Joe Grimm is visiting editor in residence in the Michigan State University School of Journalism and founding editor of the Bias Busters series.

READ THE MSU STORY—If you’d like to learn more about this unique School of Journalism team, you may want to read this MSU story about the new book, headlined: Students Join Forces with Police to Bust Bias.

HOW DOES FRONT EDGE DO IT? The Front Edge Director of Marketing Susan Stitt recently wrote an overview of our unique ability to customize books, a story that includes this new police guide as one of a number of examples. Do you have a publishing idea that could benefit from this kind of flexibility? Please, read Susan’s overview and get in touch with us.