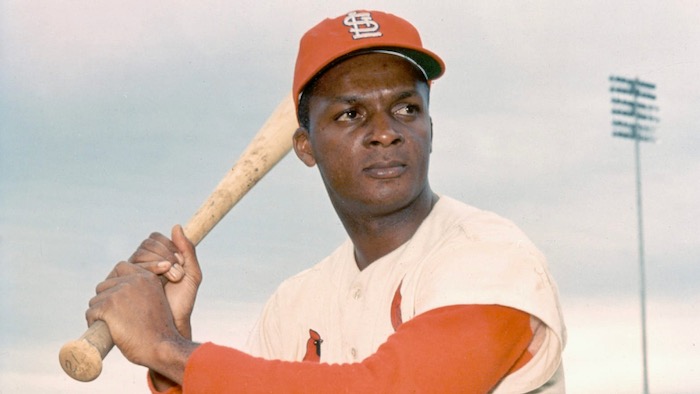 Curt Flood in his prime.

EDITOR’S NOTE—This story is developing daily; we are a weekly magazine. Since this article was written, the NBA and the players’ association agreed to resume play, but the players won significant concessions. 1. The NBA and its players will start a social justice effort that will focus on increasing voting access and implementing police reforms. 2. Arenas will be used as voting centers. 3. The NBA and its players will work with advertisers to create more social justice messages. You can read more about this here. For tensions in the WNBA, see this story on the growing power struggle between the owner of the Atlanta Dream and the team’s players. 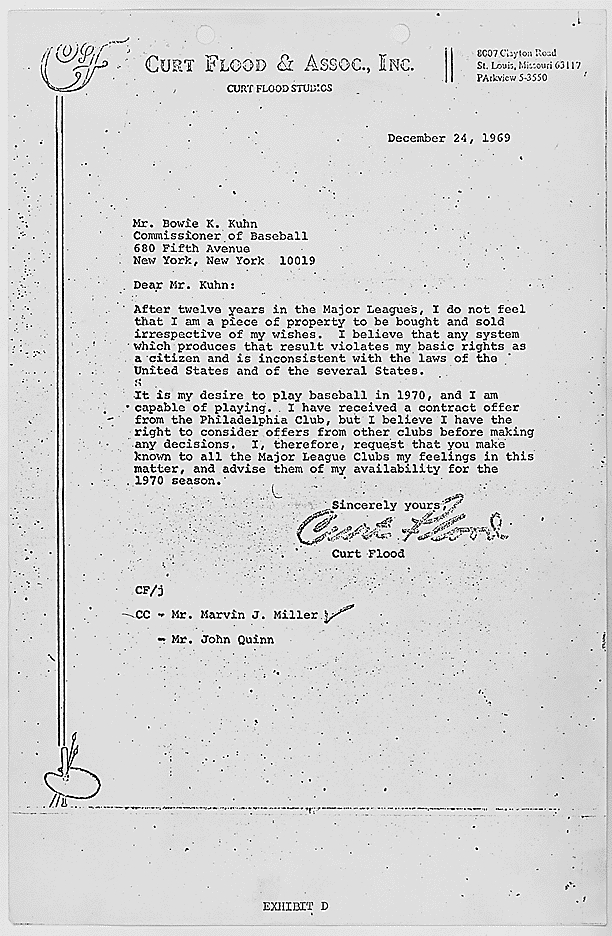 In 1969 the St. Louis Cardinals made the decision to trade its all-star center fielder Curt Flood. At that time, players had no voice. They were bound by the “Reserve Clause” that tied a player for life to the team that owned him.

Flood refused to go. While White players didn’t like the system, Black players like Flood felt the issue at a different level. It was a modern form of slavery, and Flood would not play along. His case went all the way to the Supreme Court. The Court upheld the Reserve Clause, and Flood never played professionally again. (The Reserve Clause was finally banished in 1975.)

“None of my guys” would stand with me during the trial, Flood later recalled, afraid to have their careers ended, too. “If even one had come forward,” he believes, things would have been different.

On Wednesday, August 26, 2020, players across professional sports backed the play of their teammates.

In a remarkable display of solidarity, just minutes before an NBA Playoff game between the Milwaukee Bucks and the Orlando Magic was set to tip off, the Bucks announced that they would refuse to play.

Milwaukee is just north of Kenosha, Wisconsin, where Jacob Blake was shot in the back on August 23rd by two Kenosha police officers.

That set off a domino effect. The remaining NBA games on Wednesday were cancelled. The Milwaukee Brewers major league baseball team then cancelled its game against the Cincinnati Reds. So, too, did the San Francisco Giants and Los Angeles Dodgers. All but one Major League Soccer game was cancelled. The Women’s National Basketball Association followed suit, and the Washington Mystics and Atlanta Dream cancelled their game.

As of this writing, we don’t know if, or when, play for any of these leagues will resume.

The stakes could not be higher.

When the NBA restarted in the midst of the pandemic, President Trump went on the attack—as recorded by Forbes:

During an appearance Tuesday on Clay Travis’ radio show, which airs on Fox Sports Radio, Trump lambasted outspoken NBA players in vitriolic terms. Calling them “very, very, very nasty,” and “frankly, very dumb,” Trump said the players’ social activism is destroying the league. “It’s been horrible for basketball. Look at the basketball ratings. People are angry about it,” he said. “They have enough politics with guys like me. They don’t need more. There was a nastiness about the NBA and the way it was done. The NBA is in trouble. Big trouble.”

The most popular player in the NBA was unfazed. Lebron James said: “The game will go on without his eyes on it. I can sit here and speak for all of us who love the game of basketball and we could care less.”

With today’s moves, the players are taking the next step. They are flexing muscles that Curt Flood did not have. They have the power to control not only the leagues who employ them, but to force a national discussion that too many people in the nation—many affiliated with Trump and his grossly racist beliefs and policies—have simply refused to have.

In fact, Black athletes have been trying to force these discussions for decades. Muhammad Ali lost some of the best years of his professional boxing career because he refused to be drafted into a war that he rightly understood was racist at its core. (For more, see this story in USA Today.)

Tommie Smith and John Carlos faced their own backlash in the world of track and field after they stood on the medal stands in Mexico City during the 1968 games with fists raised to show their support for Black Power. (For their story, and the story of the Australian who was also on the podium and had his career destroyed because he supported them, see this story at history.com.)

More recently, Colin Kaepernick had his career in the NFL shut down when he began to take a knee during the National Anthem to show his sympathy for the movement to call out police violence against people of color. (For more on this story, see this 2017 piece in the New York Times.)

The depth of today’s actions were seen off the court, too. Kenny Smith, a legendary player at the University of North Carolina under Coach Dean Smith—a strong advocate for civil rights when he came to UNC in the 1960s—has for ten years been a commentator and host on TNT’s highly rated Basketball show.

On Wednesday night, he walked off the set. (See the moment here.)

Perhaps the most striking moment, however, was when the Los Angeles Clippers’ coach, Doc Rivers, addressed the media after the Bucks’ game was cancelled. The quote that will stick from his discussion, “We keep loving the country, and this country doesn’t love us back.” The whole talk, however, is worth listening to. Hear it here.

Rivers is not just another coach. He was an NBA all-star, and he has been fighting racism his entire life. From a story in GQ: “In high school, [Rivers] was a McDonald’s All-American, before becoming a star at Marquette University, just 45 minutes north of Kenosha, where Blake was shot. While there in 1980, he met his future wife, Kris Campion, who is white. Being part of an interracial relationship was eye-opening for Rivers. Kris’s tires were slashed and a racial epithet was marked on the sidewalk outside her parents’ home in suburban Milwaukee.”

And that’s just part of the story. (Read it in its entirety here.)

Where any of this goes remains to be seen.

Even if it is, however, the discussion won’t go away.

Perhaps for the first time since Martin Luther King Jr., the people most directly affected by racism hold real power. And perhaps White America is, finally, going to have to listen.

It’s going to be a bumpy road.

As a white man born in the South and who has lived in the South for 40 of my 58 years, I know just how intransigent White men and women here, and across the country, are about this conversation. Care to read more about how deeply intrenched racism is in our communities, read last week’s ReadTheSpirit Cover Story featuring an interview with Daniel Hill, author of White Lies.

For those who have ears to hear, Dominic Smith of the New York Mets gave us all a deeper insight this week. After a game, Smith broke down before the press. “The hardest part … people just don’t care….. It’s hard to be a Black man in America.” (Hear his talk here.)