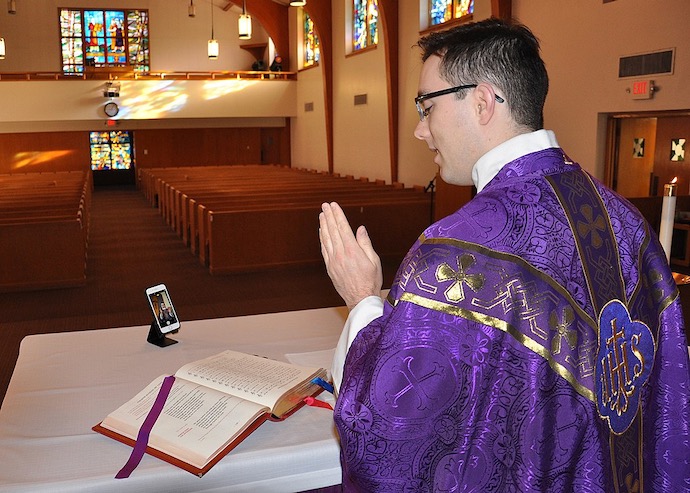 Chaplain 1st Lt. Philip O’Neill prepares for a virtual mass. Following the directions of the President and Governor Ricketts, in response to the CoronaVirus pandemic, the base chapel here is changing the format of all worship services from in-person to virtual worshipping. (Clicking on the photo will take you to the Wikimedia Commons source page, if you care to use this photo yourself in your own publications.)

Writers, teachers and preachers around the world are experiencing something we have never witnessed: Passover and Holy Week converging in the midst of a pandemic that will prevent millions from gathering in person to observe our ancient traditions. One blessing of this unique historical crisis is that all of us are reflecting in urgent new ways about the central meaning of these traditions in our lives.

Whether we gather physically or virtually, I am reminding my friends and readers that these rituals have remained with us for thousands of years, because they are formative.

Passover is marked with a seder and Holy Week with various rituals including the Maundy Thursday celebration of the sacrament of the Lord’s Supper. In these rituals, distinctive foods are eaten and faith stories are told, but they do not tend to be opportunities for leaders to shine a spotlight on themselves.

This is a good thing, since problems arise when a person takes the stage. During Passover and Holy Week, people of faith are formed by participation in distinctive rituals of the religious community, experiences which have a wealth of embodied wisdom on faith and life. Both the rituals and the communities are rightly described as religious institutions, and they do the work of faith formation much more effectively than any individual could possibly do.

NPR recently interviewed Yuval Levin, the editor of National Affairs and the author of the book A Time to Build. He has discovered that when institutions are used as stages, people lose trust. “We trust an institution when we think that it forms the people within it to be trustworthy,” says Levin, “so that not only does it perform an important social function … but it also at the same time provides an ethic that shapes the people within it.”

Think of the military, which forms a particular kind of person. Or the church. In years past, Congress was a formative institution, shaping people in such a way that they could fight for their positions but also compromise and build consensus. Good examples are Bob Dole and George McGovern, who were at opposite ends of the political spectrum but could work in the Senate to build a broad, non-partisan consensus in support of anti-hunger programs.

Unfortunately, we are now awash in daily performances in which institutions act as platforms. Performer politicians such as Donald Trump and Bernie Sanders “want to be seen as outsiders overturning a discredited establishment,” writes Michael Gerson in The Washington Post. For them, “public office is not so much a place to serve and achieve but a means to raise the profile of their activism.” Even church members are increasingly drawn to leaders who have a big stage — think of Joel Osteen or Paula White. The result, sad to say, is that the institutional church loses the trust of the people.

Moses was not a performer

Passover begins this year on April 8 and the story of the exodus from Egypt will be told once again. Although Moses is near the center of this story, the Bible makes clear that he was never interested in a big stage. When God appears to Moses in the burning bush and says he will send him to liberate the Israelites, Moses says, “Who am I that I should go to Pharaoh, and bring the Israelites out of Egypt?” (Exodus 3:11). Moses is clearly not looking for a platform. Then Moses says, “O my Lord, I have never been eloquent” (4:10). He knows that he is not a good performer, so God allows Aaron, Moses’ brother, to speak for Moses to the people.

After God sends plagues on the land of Egypt, God gives Moses and Aaron instructions about the celebration of the Passover. This sacred meal “shall be a day of remembrance for you,” says God. “You shall celebrate it as a festival to the LORD; throughout your generations you shall observe it as a perpetual ordinance” (12:14). Passover is an institution that forms the Jewish people, shaping their lives from the time of Moses to today. They don’t need Moses to perform for them, because they have something else to form them—the Passover.

Faith is about formation.

“Passover is a holiday about freedom,” writes Dara Lind in Vox, “because it celebrates the Jews’ liberation from slavery in Egypt.” The traditional Passover dinner “is organized around telling the Passover story, it’s an opportunity for Jews to connect themselves with their history; to think more consciously about those who are still oppressed today; and to hope that people today will know freedom.”

So how does Passover shape the Jewish people? It reminds them that God worked powerfully to liberate their ancestors from slavery, and it connects them with this important history. It also awakens their compassion toward people who are oppressed today—migrants who are traveling toward freedom, as well as people who are trapped in poverty or ethnic strife. Passover shapes a certain kind of moral and ethical person. It is formative for people in a community of faith.

Maundy Thursday will be April 9 this year, and the coronavirus will force churches to offer their worship services online. At the heart of the holiday is a Sacrament that is related to Passover: The Lord’s Supper. Jesus and his followers were in Jerusalem to celebrate Passover. The gospels are not precise about whether their last supper together was a Passover seder, but certainly Passover was on their minds. During that meal, Jesus took a loaf of bread, gave it to the disciples, and said, “Take, eat; this is my body.” Then he took a cup and gave it to them, saying, “Drink from it, all of you; for this is my blood of the covenant, which is poured out for many for the forgiveness of sins” (Matthew 26:26-28).

This sacrament forms and feeds the followers of Christ. Nourished by the bread, they are strengthened to be the hands and feet of Jesus, showing his love and advancing his mission and ministry. In the Lord’s Supper, the blood of the covenant is not used to mark doorways and escape death. But it is believed to have saving power and reminds Christians that the blood of Christ was “poured out for many for the forgiveness of sins” (v. 28).

Even though Maundy Thursday is not as uplifting as the fun and flowers of Easter, it is worth experiencing because it is formative.

Moses knew that no performance could be as powerful as the institution of Passover. In similar manner, no Christian leader on a platform can shape people as well as the sacrament of the Lord’s Supper.

In this season of political stagecraft, the celebrations of Passover and Maundy Thursday remind us that religion is most formative when it is grounded in the life-shaping rituals of the community of faith.