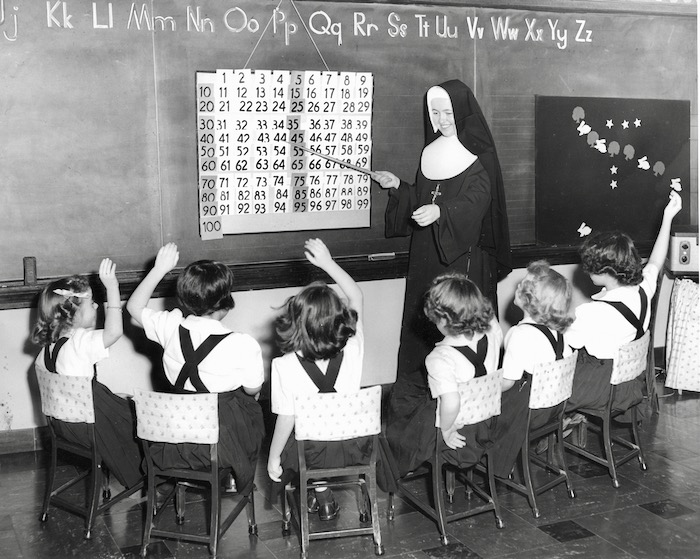 This how many IHMs are remembered: in front of a crowded Catholic school classroom. In this photo, IHM Sister Kathleen Mary O’Brien teaches 49 first- and second-graders at Our Lady of Mount Carmel in Emmett, Michigan, in 1958-1959. Courtesy of SSIHM Archives. (CLICK on this photo to visit the Amazon page for Montemurri’s IHM book. OR, to maximize your support for the IHM sisters, use the direct-purchase link below.)

From ‘Blue Nuns’ to an International Model of Green living 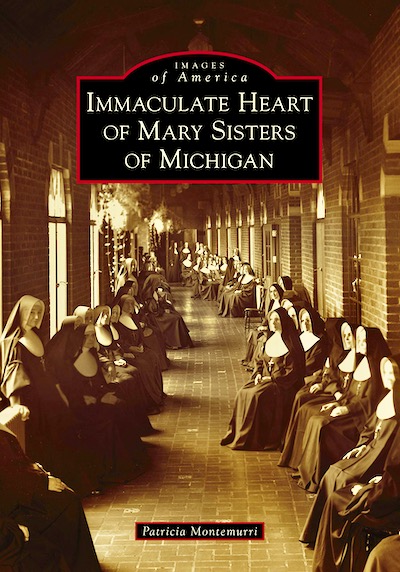 Click on the cover to visit the book’s Amazon page. (If you’d like to maximize your support for the IHM Sisters, use the direct-purchase link at the end of this story.)

MARCH 8, 2020—This is National Catholic Sisters Week, an annual festival to encourage folks to share a story about a Catholic nun or sister who taught or inspired them.

The IHMS taught an estimated 700,000 people in more than 100 Catholic schools in the Detroit-area, across Michigan and several other states as well as overseas. Among their students were Miss America 1988, Kaye Lani Rae Rafko, the first registered nurse to win the title. Don Gonyea, a national political correspondent for NPR, also was taught by IHMs, as was rocker Jack White of White Stripes fames, and a Prince of the Catholic Church—Cardinal Joseph Tobin of the Newark, N.J. archdiocese.

And they taught me. IHM Sister Archange Groh told my parents when I was in 3rd grade that I had creative writing talent. In her memory, I say thank you with this book.

Expanding the Power of Education to Include Women

The IHMs are remarkable and accomplished women.

Those taught by the IHMs have experienced the power of strong, well-educated, compassionate and committed women.

In Michigan, they championed the education of women by establishing Detroit’s Marygrove College and several all-girls schools in Michigan and Illinois.

There are but a few IHMs involved in classroom education today. Because of enrollment declines, the IHMs closed Marygrove College in December. The IHMs now minister in multiple ways—as parish administrators, spiritual advisers, advocates and guardians for the disabled, social workers and chaplains.

They once were known as the Blue Nuns for their royal blue habits. But now they are known as green pioneers in promoting—and living out—concepts of environmental sustainability. Nearly two decades ago, they undertook a multiple award-winning $56 million renovation of their massive Depression-era Motherhouse. The Motherhouse is now heated by an underground geo-thermal system. Wetlands on the property recycle about 40% of the Motherhouse’s water. Nearly every physical system in the community has been adapted in some way to improve its sustainability. They’ve given thousands of tours ever since to college classes, architects, contractors, urban planners, garden clubs and more.

Global Inspiration: ‘I can’t believe nuns are doing this’ 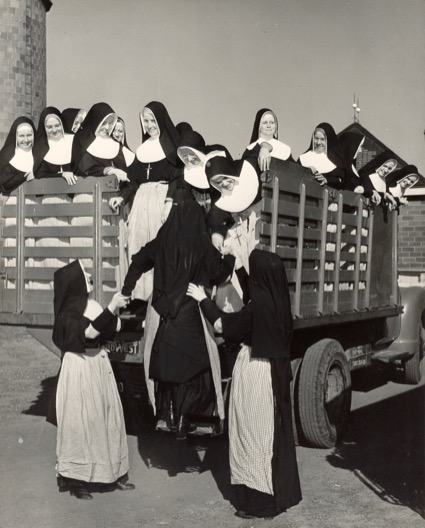 STRONG, VISIONARY WOMEN—For many decades, the sisters also farmed more than 1,000 acres around their motherhouse. In this photo, many of them are piling onto a farm truck. They raised crops, poultry, sheep, both dairy and beef cattle and tended fruit orchards. The food fed sisters at the Monroe Motherhouse and at parish convents across Michigan and into Ohio and Illinois. (Photo courtesy of SSIHM Archives.)

Sister Suzanne Sattler, who conducts many such IHM Motherhouse tours, says visitors leave in awe. “They tell me you are helping us in ways that we never thought nuns would be connected to,” she recounts. Then she tells her IHM friends: ‘You don’t have the privileged position that I do where I get to hear: ‘I can’t believe nuns are doing this.’’’

It seems each IHM past and present has an impressive story to tell. Sister Ambrosia Fitzgerald was one of the first women to obtain a physics Ph.d from the University of Michigan in the 1930s. Even as she taught math and science in Detroit-area Catholic high schools, she was secretly recruited by the U.S. government to work on weekends on the Manhattan Project in Chicago, which led to the development of the atomic bomb to end World War II. Among the IHMs are groundbreaking theologians and lawyers. An IHM nun from Monroe, Sister Sharon Holland, was one of the highest-ranking women to have worked at the Vatican as a canon lawyer. She helped negotiate settlements in long-running disputes between the Vatican and Catholic women religious in the U.S. in 2014 and 2015.

The Monroe IHMs were in the forefront of a national movement to push for all religious sisters to obtain college degrees before being deployed to teach in crowded Catholic school classrooms. The Catholic bishops and priests who oversaw Catholic schools initially resisted the concept, since it meant hiring more-expensive lay teachers to take the place of nuns.

The Monroe IHMs were founded by Redemptorist priest Fr. Louis Gillet and Sister Theresa Maxis Duchemin in 1845. Theresa was of mixed-race heritage, the out-of-wedlock daughter of a Haitian woman and a British father. She had been a member of the Oblate Sisters of Providence, the first permanent congregation of woman of color in the U.S. in Baltimore.

Theresa was highly educated, spoke French and could pass for white, so Gillet recruited her to open a school for the French-Canadian immigrants who settled on the banks of the River Raisin in the southeastern Michigan town of Monroe. The IHMs say their foundress encountered many obstacles, because of her race and her gender, in establishing the IHMs and two separate congregations in Pennsylvania. Her story of perseverance fuels their progressive pursuits today.

Click here to learn more about this special week, including regional events.

National Catholic Sisters Week was launched in 2014, the brainchild of Sister Andrea Lee, a member of the Monroe IHM congregation and the president of Alverno College, in Milwaukee, WI. Now in its 7th year, with funding from the Conrad N. Hilton Foundation, Catholic Sisters Week coincides with Women’s History Month in its efforts to bring attention to the ongoing accomplishments of Catholic women religious through their ministries and outreach.

The number of IHMs have dwindled to about 260 sisters now—a steep drop from the congregation’s peak of 1,600 last mid-century. Their average age is about 80.

But there may be an uptick underway in the number of women and men pursuing a Catholic religious vocation in the U.S., according to The Center for Applied Research in the Apostolate (CARA) at Georgetown University, which conducts research on the Catholic Church. The number of women taking final vows as Catholic sisters and nuns numbered 92 in 2018, compared to 81 in 2016, according to a CARA survey released in February 2019.

Of course, those numbers are a fraction of the legions of American women who joined the Catholic sisterhood in the early to mid-20th century. There were 180,000 Catholic sisters in the US in 1965. There are less than 50,000 now, and their average age is well into the 70s. Congregations are growing in Asia and Africa, where the religious vocation helps gain access to education, much as it did a century ago for the daughters of immigrants to the U.S. 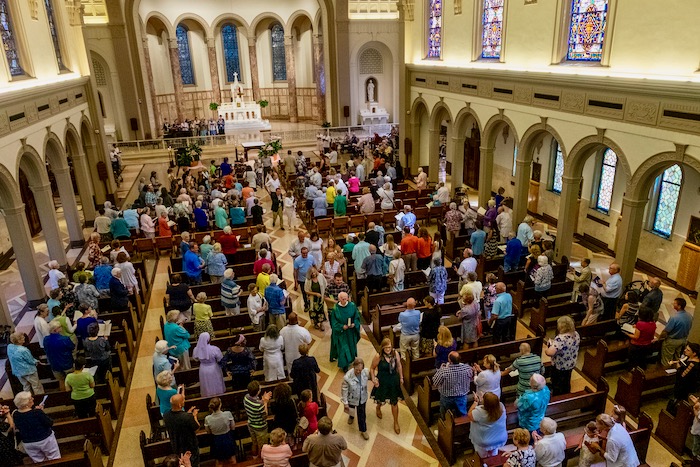 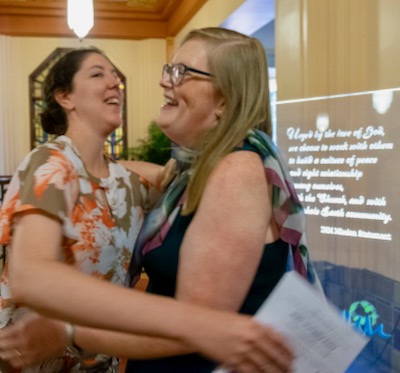 In 2019, Jane (right) professed first vows with the IHM. She was warmly greeted by Sister Audra Turnbull who took her first vows to become an IHM in 2018. (Photo by Diane Weiss)

Three women became Monroe IHM Sisters in 2019. One of them was Jane Aseltyne, raised an evangelical Christian and who had worked with at-risk youth and senior citizens. Aseltyne had two great-aunts who were IHMs. In her encounters with them and other IHMs, she explored the Catholic faith and its scholars and saints. She sought, she said, a life of simplicity rooted in the Gospel. She said she’s found it as an IHM. She took her first vows at age 34 in August 2019.

“I have been called by God. Religious life provides me with a community, and it’s not something I pick and choose when to live it,” said Aseltyne. “I choose it every day. It’s coming from within me, and it’s the gift I have to serve the world.”

We know that most book buyers, today, prefer to shop via Amazon or other popular online retailers—so we included our first links today to Amazon. However, if you would like to maximize the revenue from your purchase of the book going to the IHM ministries, please use this direct-purchase link.

Patricia Montemurri also wrote a fascinating column for our Front Edge Publishing blog about her ongoing work with Arcadia Publishing. Especially if you are interested in Catholic history and culture, you’ll learn about her two earlier books on Catholic themes—plus an upcoming fourth book. Got a Catholic on your gift list this year? These make terrific gifts that spark lots of memories—and can inspire future spiritual reflection.