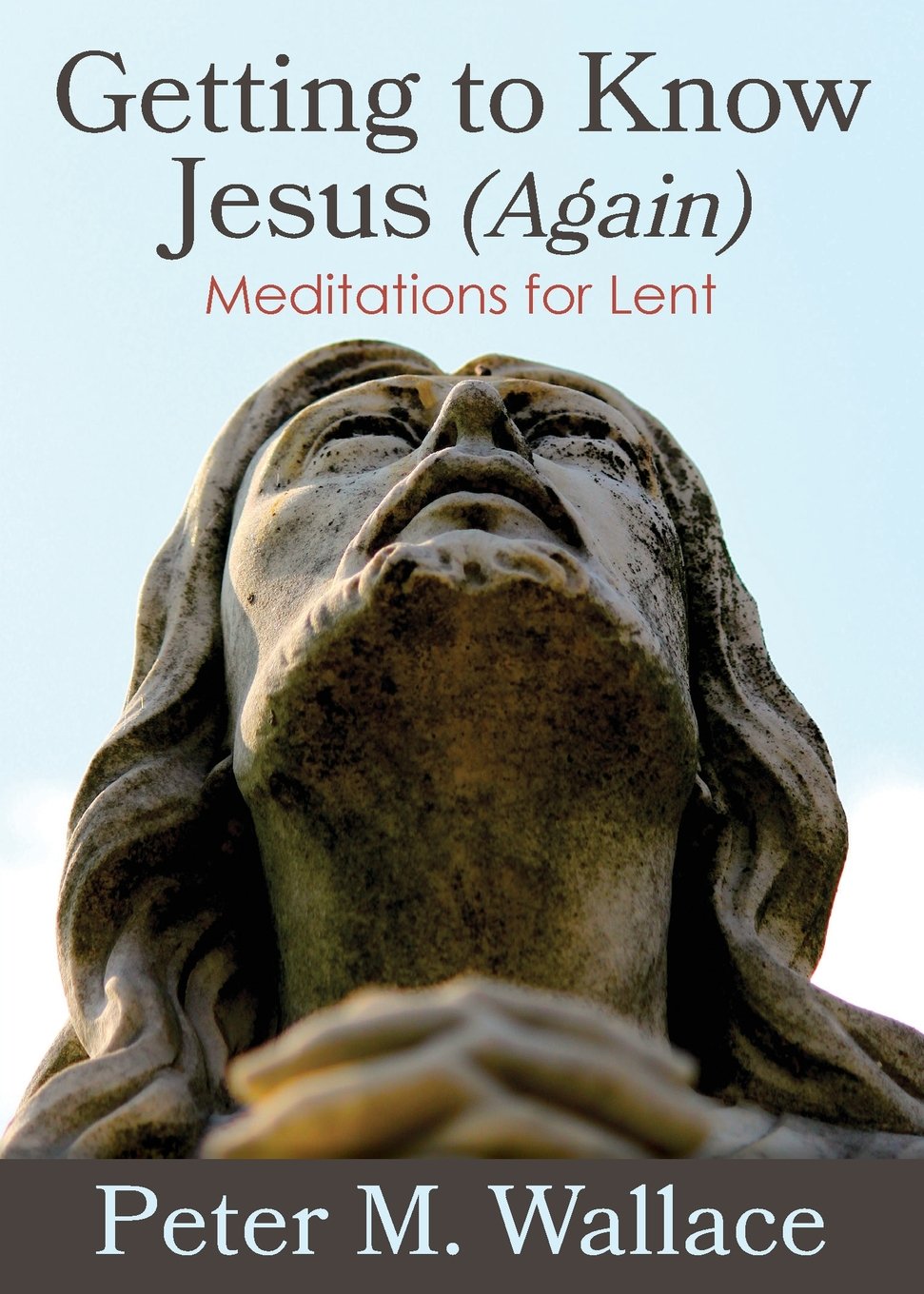 What does Lent mean to you, these days? Perhaps a mention of that word is a reminder of pre-Lenten carnivals or mardi gras or special seasonal pastries loaded with fat and gooey goodness. If you’re a Christian you may think it’s a time to try to give up chocolate, or cigarettes, or foul language—once again. If you’re a Jeopardy fan, it may merely be the response to the clue: The Christian season that leads to Easter.

“But, wait, there’s so much more!” says popular Day 1 radio host and author Peter Wallace. “This season is a wonderful spiritual opportunity.” These weeks could be a chance to move closer to a “life of learning and giving and sharing and growing.” If you are among the 2 billion Christians starting Lent in this new week, Peter says, then making Jesus your daily companion is the best way to step toward that “life you can’t wait to wake up for in the morning.”

“That’s the kind of life Jesus wants you to have,” Peter tells us. “But experiencing it comes from spending meaningful time with him. Reading his words and works in the gospels. Praying. Listening to him. Talking to him. Trusting him.”

Why this Lenten invitation is so timely With a radio show that appears on more than 200 stations nationwide, Peter keeps his finger on Americans’ spiritual pulse—and he created this new book because he understands this opportunity.

Viewed from the overall perspective of sociologists, Lent isn’t faring all that well as an observance worldwide. A majority of Americans still say they are Christians, Pew Research tells us, but millions of those Christians ignore Lent—either because they are part of Protestant churches that never emphasized the season or because they don’t see much point in Lenten disciplines.

As Americans, our religious focus tends to be on the two big holidays: Christmas and Easter. Pew Research has been tracking Americans’ Google searches for religious terms since 2004 and, every year, searches for the word “church” peak in the week before these two holidays. These are the two biggest attendance draws each year, coining the term “Chreaster” for these occasionally observant Christians.

Worldwide, Pew has found that less than half of the population in South American countries—still heavily Catholic to this day—say they participate in any form of Lenten fasting. Pew found that Lenten fasting and church attendance is a bit more common in certain areas of Eastern Europe and particularly in Greece, where the Orthodox Fast of Great Lent is a deeply rooted part of the culture. But, overall, secularization is widespread.

In Italy, Elisa Di Benedetto, managing director of the International Association of Religion Journalists, says, “If you’re looking for cultural aspects of the season here in Italy, then there is the carnival, which ends when Lent begins.” In fact, there is a nearly 1,000-year tradition of elaborate celebrations and costumes in the carnival of Venice, a global tourist attraction. “But if you’re looking for religious aspects of Lent? I’m not sure people feel that strongly about these things nowadays. Give something up for Lent? I don’t know of too many people who are doing that.”

In North Africa, her IARJ co-director Larbi Megari points out that Christian minorities don’t tend to publicize their religious practices. “There’s no public presence of these Christian practices in Algeria. These are minorities and they don’t want to make big public displays with their religious observances. It may be a more visible practice in a country like Egypt with the Coptic church.” Observant Coptic families still follow the strict Eastern Orthodox Fast of Great Lent, which extends for more than 40 days and excludes meat, fish, eggs and dairy products, wine, and oil from the diet.

In major studies of global religious trends, Americans as a whole tend to rank among the world’s most religiously observant people. But when it comes to Lent? American observance of Lent is not universal across Christian denominations and, even among Catholics, Lenten practices have become fairly casual, studies show.

“That’s why, on our radio network, we don’t emphasize the season of Lent, because we are broadcasting to a very diverse Christian audience out there and we know that many Protestant denominations traditionally don’t do much with Lent,” says Peter Wallace in our interview. “No question, there are many men and women out there who’ve either never experienced Lent, or who have fallen away from that. That’s why this is such a great opportunity to reach out with this new book and offer people a chance to discover—or to re-discover—the traditions of Lent.”

‘Taking something on’ for Lent

“You’ve reported on this in the past,” Peter says, referring to past articles in ReadTheSpirit. “Some of the mysterious spiritual practices that the church observed for centuries—like the spiritual disciplines of Lent—are attracting interest in many individual congregations and among young people seeking a depth to their lives that they are not experiencing in this culture. For example, we don’t think of Baptist churches having an Ash Wednesday service and yet our Day 1 headquarters is located on the campus of a big Baptist church here in Atlanta and they do have Ash Wednesday services and they will be observing Lent.

“I think this is growing, if you look in the right places. I keep hearing from people who tell me they want more depth as they approach this season. They’re familiar with this cultural idea of ‘giving something up for Lent,’ like chocolate or wine or something like that. But that can become pretty silly if there’s no real spiritual connection to that.

“I’m hearing more about people deciding to take something on during Lent. They might try a new spiritual practice. If you’re not used to picking up the Bible for 15 minutes each day, then try that during Lent. Or, if you don’t usually pray during your day, take on some kind of daily prayer. Or you might volunteer at a community food bank.”

The global trend may be toward secularization in many regions, but certain populations are drawn toward some of the spiritual disciplines, Peter argues. “Some of the mysterious, powerful, spiritual practices that the churches observed for centuries are being rediscovered particularly by young adults who are seeking a depth to their lives that they are not experiencing in today’s culture.”

That idea matches data compiled by book publishers, in recent years, showing a rejection of digital reading in favor of ink-on-paper reading,  a trend often described as “screen weariness.” With the dawn of smartphones and Kindles in 2007, publishers watched digital book sales skyrocket for several years, threatening to wipe out ink-on-paper publishing if the trend continued. Then, to the shock of many publishers, e-book sales fell and paper-book sales rose. This move from digital to paper reading is true among all ages, younger adults in particular. (Care to read more about this surprising trend? Check out this column, headlined “Are ink-on-paper books dead?” at our new Front Edge Publishing website.)

“I see that, too,” Peter says. “Our lives have become so technology and social-media driven with information coming at us around the clock. Alerts keep coming all the time on our phones and other electronic devices. We get to a point where we simply want some place that’s quiet so we can reclaim a sense of meaning and just stop everything else to experience the mystery, the wonder of faith.”

That also lines up with recent Pew research. In a 2016 report, Pew summarized the trend this way: “There has been an increase of 7 percentage points between 2007 and 2014 in the share who say they feel a deep sense of wonder about the universe at least weekly (from 38% to 45%). And there has been a similar rise in the share of religious ‘Nones’ who say the same (from 39% to 47%).” In other words, even among Americans who have rejected any religious affiliation (the “Nones”), men and women are moving in significant numbers toward welcoming what amounts to spiritual reflection.

Peter Wallace points us in 4 directions

The other important thing you should know about Peter’s new book is his brilliant design of four directions for spiritual action, based on the 52 short meditations in this book. (Yes, Lent is traditionally “40 days,” but Peter extends his readings beyond Easter.) Peter describes these 4 directions as:

GET REAL—Pointed questions to help you figure out what Jesus’s words have to do with you and your life.

DIG IN—Go deeper into the meditation’s Scripture reading, pointing out some things you may have missed or might want to study further.

READ ON—This takes you to some other parts of Scripture to add to your understanding of what Jesus says or to show you what happens when you really believe what he’s saying.

TAKE OFF—A springboard to prayer in light of what you’ve read and thought about, with some ideas on what your next steps might be.

Every one of the 52 readings concludes with questions and other prompts leading readers in these four directions.

“I did this because I know people are drawn into this kind of experience in many different ways,” Peter says. “You can try all four of these, as an individual, or you could choose one daily path that really appeals to you. Another great way to experience this book is to share it with somebody and do this together. Compare notes as you go. Most churches have small groups, already. If not, form a small group yourself. Someone in your small group may be more drawn to one direction than another. That’s fine. You’ve got four options here.

“Yes, this takes some effort, but I can tell you—it will be well worth it. That’s why so many Christians have marked this season for so many years. It’s a terrific opportunity to meet Jesus again—just waiting for us.”

For more than a decade, we’ve also been publishing books that make our world a better place. You can always check out our ReadTheSpirit Bookstore with links to Amazon, Barnes & Noble and other retailers—and please take a look at our new Front Edge Publishing Bookstore.