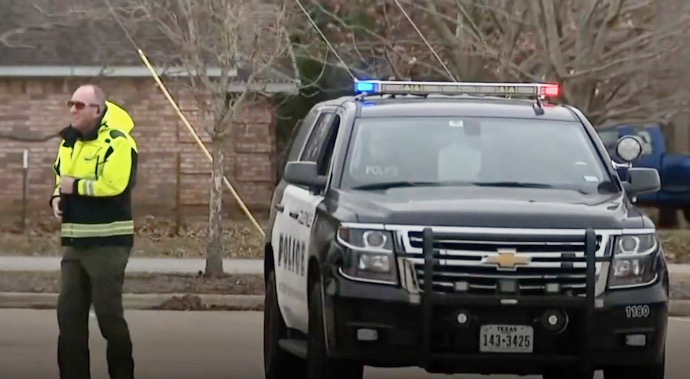 Police outside the Colleyville synagogue on January 15, 2022. (Photo courtesy of Wikipedia.)

This morning I came across a headline for an upcoming webinar from a Jewish Learning Center I frequent. It said: Tefilah (which means “prayer”), Torah (which means “study of Jewish text”) and Trauma (which I assumed referred to the hostage situation at a synagogue in Colleyville, Texas, on January 15).

For more than a week, Jewish news has been filled with references to the 11-hour synagogue siege, the bravery and spiritual stamina of the rabbi, and the new vigilance that synagogues and Jewish institutions throughout the country must now undertake.

But here’s the thing: The headline that caught my eye didn’t actually say “Tefilah, Torah and Trauma.” It said, “Tefilah, Torah and Teruma,” referring to a section of Scripture (Exodus 25:1-27:19) that will be studied in a few weeks. What I read—the grouping of prayer, study and trauma made perfect sense to me—because since January 15, trauma has become part of our daily Jewish conversation.

Rabbi Angela Buchdahl was the rabbi whom the terrorist telephoned to try to arrange for the release of a prisoner serving a sentence for al-Qaeda-engineered crimes including attempted murder. In her sermon this past Friday night, Buchdahl said, “If you are a Jew in America today and you are not feeling unsettled, you are not paying enough attention.”

She said this in New York City. In a confident, comfortable, thriving Manhattan synagogue. In a city where Jews are deeply embedded in the social, cultural, and professional landscape. In a neighborhood where antisemitic views are not tolerated and hate crimes of any ilk are anathema.

If Jews in Manhattan are uneasy, imagine how the rest of us feel.

I expect to be greeted by armed security guards when I go to synagogue in my home city of San Diego. Most of us take that in stride now, but think about explaining it to your child or your children’s friends who are attending services as guests. It’s great to be Jewish, we want our children to feel. It’s a venerated tradition, a historical privilege and a noble responsibility.

We ask ourselves: Is there always a price?

After last week, would you let your child attend a friend’s Bar or Bat Mitzvah in a synagogue? If you did, would you give them any warning in advance? If you didn’t let them go, how would you explain that? That it’s not safe to be Jewish? That some people “hate Jews?”

Think about approaching your place of worship, hungry for a spiritual experience, an experience of warmth, connection, and inspiration. But first, as you approach the armed individuals dressed in black, you remind yourself that the guards are there because someone might not be walking through the doors looking for hope and healing. Someone might want to target you or your spiritual home or people who share your customs and beliefs. Because they think Jews are infidels. Or because they believe Jews control the world. Now, relax, greet your friends, take a seat, enjoy the music, join in prayers for peace and understanding. Stay after the service and mingle with others. Let your children or grandchildren run freely, treating the synagogue and its grounds as a safe place, a second home.

Can we ever let our guard down?

Since the murders at the Pittsburgh synagogue in 2018, many synagogues and “Jewish” buildings have tightened security. For safety reasons, it’s imperative that security be extensive and visible. Additionally, any synagogue or Jewish school or community center that doesn’t seriously invest in security will dramatically lose attendance and the trust of its constituents.

Security discussions are part of board meetings, staff meetings, strategic planning and priority hiring. Such an unfortunate use of people’s time, energy, resources and communal commitments! Unfortunate, not because these aren’t critically important concerns, but because that very time, energy, etc. would be put to so much better use if it were directed to educational and healing pursuits. If those resources were put towards feeding the hungry and camp scholarships and teen programs and support for the frail and elderly, and…and…

Instead, for the past few years, our preoccupation has been with safety because this is the world we live in. And, now, once again, we are reminded how vulnerable we are. We who frequent synagogues and other Jewish meeting places daily, weekly or even just occasionally, we are frightened, angry or shattered. Or all three.

Rabbis are taught to end sermons with “Nechemta,” meaning, “words of comfort.”

I guess this article can’t be used as a sermon because I have nothing of comfort to say.

Perhaps you can comfort me.

Care to respond? You can add a comment below, or you could contact Rabbi Bohm through our magazine via [email protected]

Rabbi Lenore Bohm was among the early wave of women ordained as rabbis in America. Before her ordination in 1982, she studied at Hebrew Union College-Jewish Institute for Religion in Jerusalem and Cincinnati. She began her rabbinic service in San Diego; she has continued her studies both in the U.S. and Israel over many years; and she has become widely known in southern California as a leading Jewish educator. In early 2022, we will publish her reflections on the Torah, a week-by-week guide book for individual reflection or small-group discussion. Stay tuned to ReadTheSpirit.com for news about that upcoming book!

FOR MORE ABOUT COPING WITH SUCH TRAUMA: Readers concerned about the legacy of such traumas—and the resiliency that helps families to cope with these tragedies—will want to read Healing a Shattered Soul, by Mindy Corporon. Mindy lost both her son and her father in the 2014 shootings outside the Jewish Community Center of Greater Kansas City. For more on “unplugging extremism,” please read Bill Tammeus’s Love, Loss and Endurance.

FOR MORE ABOUT REMEMBRANCE AND COMBATTING ANTISEMITISM: Read about this year’s observance of International Holocaust Remembrance Day, January 27, 2022.