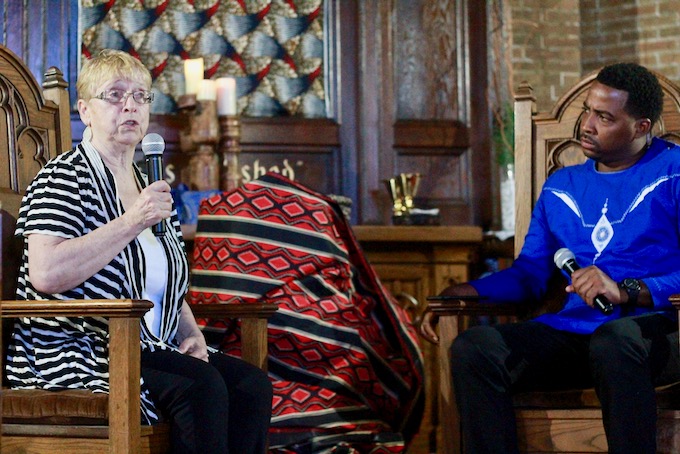 “Where should I seek help if I have been abused?”

“What are the similarities between the consequences of sexual abuse and mental abuse?”

“Are the police likely to listen to a person who has been abused—or are they prone to subtly suggest that you were inviting the abuse in some way?”

“Who can I call if someone I care about has signs of mental illness due to sexual abuse?”

These are just some of the questions people are asking as I travel to talk with groups about my own life story, as told in Light Shines in the Darkness: My Healing Journey Through Sexual Abuse and Depression.

Just open a newspaper or Google News any morning for headlines in this urgent national conversation about the long legacy of abuse as well as the challenges of mental illness. You don’t have to look far for headlines on Jeffrey Epstein, Larry Nasser, Jerry Sandusky and the coverup in many quarters of the Catholic Church. The ever-growing list includes famous (and previously unknown) women and men.

In particular, there are stunning numbers of women coming forward in front-page headlines with important accounts that have been hidden for years.

Inspired by the pioneers in the #MeToo movement (women including Alyssa Milano and Ashley Judd), others have now courageously told their stories (including Oscar-winning actress Sally Field and best-selling Christian historian Diana Butler Bass). Of course, all those are famous names.

Among the previously unknown women who have stepped forward is Col. Kathryn Spletstoser, who just went public this week with her report about sexual abuse by Gen. John Kyten. She went public, she says, because he is on the verge of confirmation as the military’s second-highest officer. It was Kyten’s nomination that finally prompted her to go public, she told The New York Times. Spletstoser is still in the midst of a deeply emotional national debate over her report. She was following in the footsteps of Senator Martha McSally who finally reported in March that she had been raped at the U.S. Air Force academy 30 years ago. McSally did not name her abuser, so side-stepped some of the furious push-back coming at Spletstoser from supporters of the general.

Whatever the outcome, there is simply no way to ignore the widespread problem.

As I point out in my book: “Every 98 seconds, an American is sexually assaulted. And every 8 minutes, that victim is a child. Meanwhile, only 6 out of every 1,000 perpetrators will end up in prison.”

Traveling and Talking about the Healing Journey 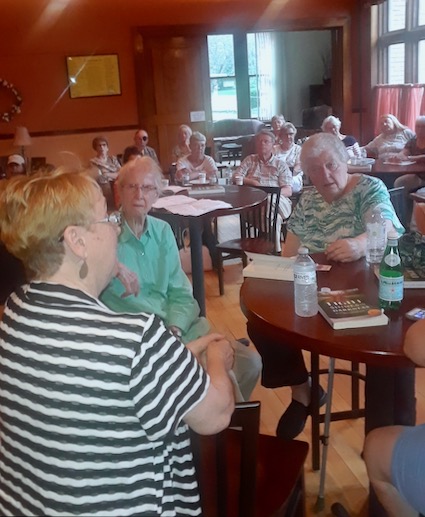 So, I am traveling and talking about my story, my book—and the help that is available in many forms and from many sources. My journey can be both painful and inspiring.

I am on the road because I can tell from the people I meet that my message ultimately can be a catalytic moment helping many others along their own healing journeys.

For example, I gave a 50-minute overview of my book at Tabernacle United Methodist Church in Binghamton, NY. Among the key issues that I stressed were:

“It is important that you clearly understand that, while I say I am on a ‘Healing Journey’ in the subtitle of my book, I do not think of myself as ‘healed’,” I told the men and women who had gathered at Tabernacle.

“I think of myself as ‘stable’, but that depends on maintaining many practices, which I describe in the book,” I said.

Searching for Stability after Abuse:
Bringing Many Practices Together

I listed some of the disciplined practices that bring stability:

“Even with all of this, I still suffer from Post Traumatic Stress Disorder, PTSD,” I said.

Following the presentation I answered many questions, including some of those I have listed above. I urged people to consider talking about these issues with friends. They could begin by using the Study Guide that is included in the book.

The audience not only gave a long applause but many also bought my book and were eager to have me sign it. I was deeply moved by the experience—and I could tell many of them were, as well.

A New Calling:
Helping Others to Confront Legacy of Abuse

On July 7, I was back in the Chicago area, where I live. This time, I spoke at St. James Community Church, which is largely African American. I was interviewed by Pastor William Hall at the beginning of the worship service.

“How did you come to write your book?” he asked.

“It wasn’t my idea,” I said. A friend who knew my story asked if she could produce a play about me and, when we sought professional advice about this, we were advised that my story really should be presented in a book first. That started me on the long process of writing Light Shines in the Darkness, which was published earlier in 2019.

“The found that the writing was very healing for me,” I told the congregation.

As I do in the pages of this book, I not only told my own story at St. James—but was able to step back and analyze it from my perspective as a clinical psychologist and clergywoman.

I can already see from the reception of this book that the whole process is becoming a new “calling” or “mission” to share the story as a doorway for others to move toward healing.

At the end of our time together, the pastor asked if he could pray for me. Of course, I agreed. Then, I realized that the whole congregation was literally reaching out to me, both audibly and physical reaching out to share in the pastor’s fervent prayer.

I left feeling refreshed and inspired, knowing that this congregation was praying for me and thus enabling me to carry out the mission to which I have been called.

GET THE BOOK—Lucille’s book is available from Amazon in Paperback or Kindle, as well as in a Hardcover edition. Prefer to shop at Barnes & Noble? They’ve also got the Paperback and Hardcover.

DISCUSS THE BOOK WITH FRIENDS—There’s a free Discussion Guide included right in the book, plus information about national resource groups, websites and hotlines.

CARE TO SCHEDULE AN APPEARANCE? Visit Lucille’s Resource Page for Light Shines in the Darkness, which is part of our Front Edge Publishing website.

Clinical psychologist and clergywoman Lucille F. Sider earned both a master of arts in religion from Yale Divinity School and a master of science from the University of Kentucky. She was awarded a Doctor of Philosophy degree from Northwestern University in the fields of psychology and religion. She is an ordained minister by the First Congregational Church, Evanston, Illinois.  Lucille was Executive Director of The Samaritan Pastoral Counseling Center in Evanston, Illinois. While there, she was licensed as a clinical psychologist and became a Fellow in the American Association of Pastoral Counselors. Lucille is now retired but remains active as a volunteers in the Lighthouse program at Edgewater Presbyterian Church in Chicago and also at two retirement communities, focusing on people with memory disabilities. She also is a popular speaker, writer, teacher and workshop leader.