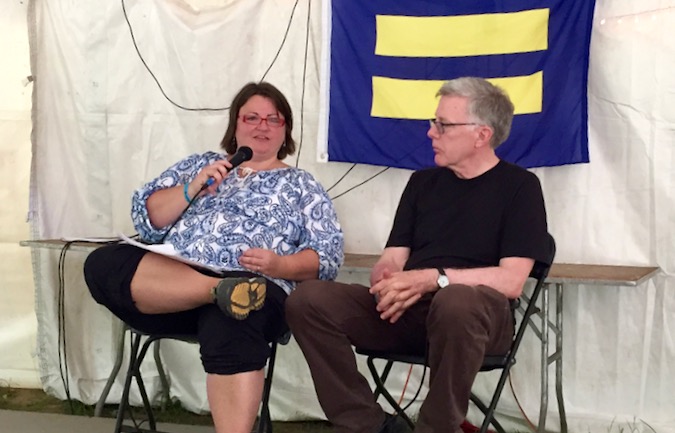 Emily Swan and Ken Wilson talking to a crowd at the Wild Goose Festival 2018 about their vision of the world into which Jesus is leading them. 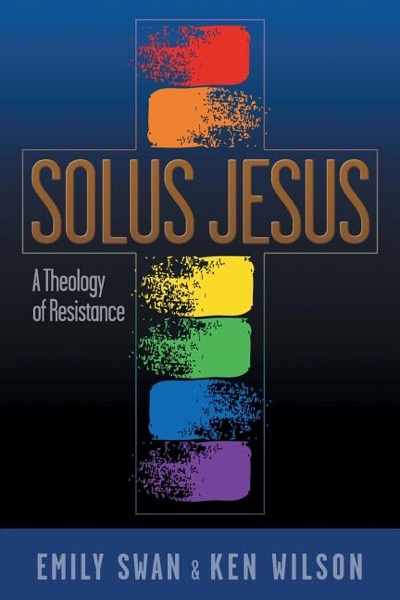 Just imagine: A world where everyone feels safe. Everyone is loved. That alone is an astonishing vision in this era when each morning’s front-page headlines chronicle yet another crushing confrontation between our nation’s leaders.

And then imagine: In this world shaped by Jesus’s vision of compassion and justice, everyone is invited to explore God’s goodness—because everyone recognizes that a loving God continues to remains active in our world.

That’s the inspiring message of the new Solus Jesus: A Theology of Resistance, by Emily Swan and Ken Wilson. (The book is available through online retailers, including Amazon, Barnes & Noble and our own Front Edge bookstore.)

What are they resisting? Five hundred years after the Reformation cry of independence for Christians to directly follow Jesus, Emily and Ken are calling for a new reforming movement. They are  pushing back against the rigid Evangelical-with-a-capital-E boundaries that they believe are actually preventing Christians from following Jesus in new ways. Wherever they go, these days, Emily and Ken are preaching that Jesus is alive and is inviting people into a world of inclusion and acceptance of diversity.

A DIFFERENT KIND OF QUEST 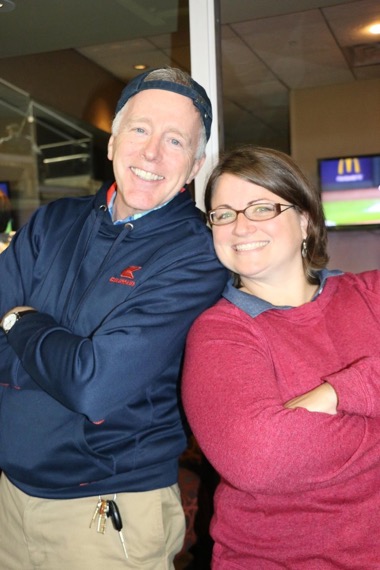 Does this story of a vision, a quest and a brave new world sound a bit like a fairytale? Perhaps, to some readers. But, the fact is: This new world they envision actually exists right now—especially in communities that form around banners like the annual Wild Goose Festival. That’s where they officially launched their new book with help from Brian McLaren, who put it this way: “Solus Jesus: A Theology of Resistance challenges us to see the authoritative Jesus in a fresh light—so that his life, message, death and rising summon us to live in a new way as individuals and congregations.”

How did this summons to a new world unfold? Well, once upon a time, Ken was nationally known as an evangelical leader on the forefront of dialogue with other scholars both inside and outside of Christianity. He was among the evangelical pioneers opening up constructive conversations between evolutionary biologists and traditionalist Christians who reject that science. Ken pushed the boundaries of his religious realm—until he finally called for full inclusion of LGBTQ Christians in his popular and provocative book, A Letter to My Congregation. Finally, Evangelical forces rose up and kicked him out of the kingdom.

Now, he and Emily are pioneers in a land they sometimes call post-evangelical—and sometimes simply describe as “a new way of more honestly following Jesus.”

He continued, “But then, what does that term post-evangelical even mean? What are we now? One way to look at it is: We’re still following Jesus like always. That part hasn’t changed. And, we haven’t joined mainline Protestants. Our whole experience over many years involves such a personal connection with Jesus that we would feel like strangers in a strange land among mainline Protestants.”

Like Moses searching for a new land, Emily and Ken are pastors serving the Blue Ocean congregation in Ann Arbor, but they also devote time to making new connections—continuing to preach both inside and outside of the formal church. That’s why they went to the campgrounds and tents of Wild Goose to launch their new book.

Ken is straight and married. Emily is gay and married. The steel curtain of exclusion that evangelical leaders have tried to drop around inclusive pastors has proven to be a painful barrier for both of them. But they are shouldering that hostility, because they now are united with so many other Christians who also have been marginalized and abused by traditionalist church leaders. Whatever has befallen them along the way, Emily and Ken know that such religious condemnation is far more damaging to the millions of vulnerable men and women who Emily describe collectively as “queer.” That’s the term she uses to embrace all the various LGBTQ letters associated with gender today.

‘THESE ARE MY PEOPLE!’ 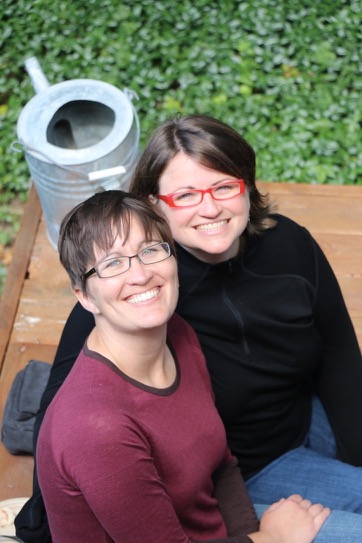 “We need to find ways to start living now in the world we hope is coming,” Emily said in an interview after their pilgrimage to Wild Goose. “I think that’s a good way to describe the experience of this festival of thousands and thousands of progressive Christians who camp together in the hills of North Carolina. When we arrived, I was so pleased just to see this whole community of tents and RVs and cabins—along with tents and stages for the programs and then booths for different groups—and lots of other places where people could visit and talk. It’s really a celebratory community with lots of flags and banners and fabrics and lanterns and lights.

“In short, it’s beautiful. Walking along and seeing all the people, stopping to talk to new people along the way, I had this odd feeling come over me. I thought: These are my people!

“I felt a real welling up of gratitude. And that’s really remarkable, because coming from our background in a more spirited kind of Charismatic worship, the worship at Wild Goose actually was somewhat flatter than we normally experience at Blue Ocean.

“So, why was I responding in this way? I think it’s because I have been living in an evangelical world where being female and queer is not the norm. There’s very little space in which I can breathe and be myself. So, coming into a community like this—there’s this enormous sense of relief. The people we met didn’t expect me to justify myself. I didn’t have to defend my very existence. I felt this growing gratitude for all the people who have been working for years to create welcoming spaces like this.

“I don’t have these opportunities on a regular basis. So, my wife Rachel and I walked around Wild Goose. We wanted to meet the neighbors. As people cooked, they often would share with each other. We didn’t have a campfire, but we did set out a candle where we could gather around and talk. I came across a woman who turned out to be the pastor of a Cooperative Baptist church in Missouri. I gave her a copy of Solus Jesus, we talked, she said some good things about our new book—and we’ve kept in touch since Wild Goose. And that was just one of the many people I encountered.

“When you walk into a world like this where everyone truly is accepting—where people simply smile at you as you walk past—there’s this joyous feeling that wells up inside of you.”

Coming home and mulling over that experience, Emily said, “Of course, I know there have been other Christians there before us knocking down some of the walls that separate us. Thank God for those people who have been working on this for a long time. Now, I realize more than ever that we need to join together and start from scratch in reimagining church. We need to reimagine a more inclusive theology. Of course, that’s what Solus Jesus is all about. I hope our readers decide to join us in knocking down walls and building something new that’s a better world for all of us.”

CARE TO SUPPORT THIS WORK?

Are you drawn toward the work Emily and Ken are doing these days? First, get a copy of their new book. The book is available through online retailers, including Amazon, Barnes & Noble and our own Front Edge bookstore.

Read their columns! You’ll find lots of creative ideas and ministry resources in this series of columns, which they share.

Visit: If you’re passing through Michigan, visit them at Blue Ocean Ann Arbor.