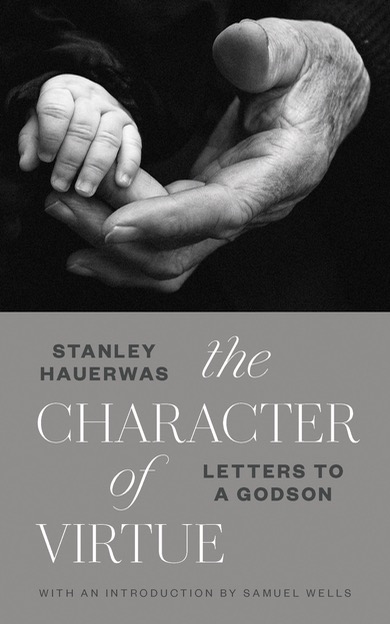 Halfway up the stairs
Isn’t up
And it isn’t down.
It isn’t in the nursery,
It isn’t in town.
And all sorts of funny thoughts
Run round my head.
A.A. Milne

Virtue matters because it enables us to realize our potential. Virtue names the ways good habits become inscribed on our character by steering between excess and defect. Christopher Robin put things much the same way as he sang, “Halfway up the stairs …”
Samuel Wells in explaining why he asked Stanley Hauerwas to be godparent to his son, Laurie.

I confess that I find it frightening to be asked to be your godfather. It tempts me to be more than I am. … But for me to pretend to be wise would be pretension. And there’s nothing I hate more in life than pretension. I’m originally from Texas, and Texans are people who have had their pretentions ground into the ground by the hard land we found we couldn’t master. Texans, in short, are people who have nothing to live up to. What you see is what you get.
Stanley Hauerwas in the first of 16 annual letters he wrote to Laurie.

By DAVID CRUMM
Editor of ReadTheSirit

Would you invite Stanley Hauerwas—the famously “angry” theologian—to become your child’s godparent and agree to write a series of letters to your son or daughter? That is what the Rev. Dr. Samuel Wells and his wife did two decades ago, fully aware of the famous theologian’s “happy anger,” as Well describes it.

The Wells’s chose Hauerwas—and he agreed—because of the rock-solid foundation of Hauerwas’s prophetic voice: Truthfulness. “All I can promise is that I will try very hard never to lie to you,” the theologian writes in his first letter to little Laurie.

That’s exactly what the Wells’s were hoping. Samuel writes in this new book’s introduction:

“His restlessness resonated with my sense that Jesus came to unsettle, rather than to comfort, and the angles from which he addressed the issues of today and forever intrigued and challenged me to a degree I hadn’t found in any other contemporary theological writing. He was, in short, talking about the questions I was asking, with a fearless relish that I longed to imitate.”

That honest counsel about growing into a life of faith is precisely the role of an ideal godparent, Wells and Hauerwas both argue in this book.

Wells and Hauerwas became friends when Wells served as Dean of Chapel at Duke University, where Hauerwas has taught for many years. Today, they are separated by an ocean. Wells now is Vicar of the landmark St. Martin in the Fields at Trafalgar Square in London. Hauerwas is semi-retired but still teaches and writes—and agreed to publish these letters as a book with some collaboration in the form of a 28-page introductory essay by Wells about the role of an ideal godparent.

Then each of the letters in this volume reflects on a different Christian virtue—including Kindness, Truthfulness, Hope, Justice, Courage, Humility and Generosity. That opening section by Wells on what it means to serve as a godparent, plus all of Hauerwas’s thought-provoking letters, makes this book perfect for small-group discussion in your congregation. 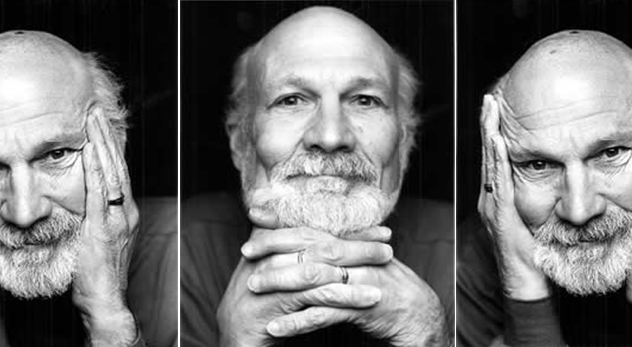 Regulars at ReadTheSpirit know that we have featured interviews with Hauerwas and recommendations of his books a number of times over the past decade. He welcomed this latest interview, he said, because of the deeply personal nature of this book. So, my first question this time was about Wells’ description of him in the opening pages as “an angry, happy man and a happy, angry man.”

In his introduction, Wells writes:

“What makes him angry is to see the way, particularly in the United States, Christianity has been transposed into a benign form of therapy or a soundtrack for nationalist ideology, and, in particular, the way that project has been underwritten by some of America’s most famous and distinguished theologians. … This anger turns constructive when Stanley seeks to identify, first, on what ground the church’s faith should instead stand, and second, how the church forms the character of its members.”

I read that passage aloud in our interview and said to Hauerwas: “Anger is not one of the Christian virtues you identify in your letters to Laurie. I am aware at least one pastor who has preached recently about the importance of anger in these turbulent times, but I would say that most Christians don’t consider anger a virtue.”

“Well, I think anger rides on the back of courage, which is one of the virtues I wrote about in these letters,” Hauerwas said. “Of course, that kind of courageous energy needs to find expression in a constructive way. But I think not to be angry at the current political alternatives in this country—well, it’s beyond me how Christians could not be angry right now. I think a lot of people are still in shock and are feeling helpless, which I can understand, but that’s very dangerous because simply sitting there stunned gives credence to certain kinds of violent responses that are unfortunate for all of us.”

THE DANGEROUS SPIRIT OF KINDNESS

“To be fair,” I said, “the first virtue you address at length is kindness. I don’t want to give readers the impression that this book is a thunderous blast from an Old Testament prophet. I think kindness sums up the tone of this book as you write to this child.”

Here’s a sample of what he writes about kindness in the book: “To be kind in a violent world is very dangerous, but fortunately you will discover you were destined to be kind. The Spirit of kindness stirred in the waters of your baptism, setting you on a difficult and rewarding journey.”

I told Hauerwas, “If I was leading a small-group discussion of your book in my congregation, I could spark a spirited discussion with the remarkable line: ‘The dangerous Spirit of kindness stirred in the waters of your baptism.’ That’s a potent image!”

“You’ve identified the problem,” Hauerwas said. “People can get confused when you mention kindness because they think of it as a kind of sentimentality that doesn’t make judgments that we do need to make. Kindness is a demanding virtue insofar as it should force us to see others in an honest, nonviolent way. Iris Murdoch says, ‘Love is the extremely difficult realization that something other than oneself is real. Love … is the discovery of reality.’

“That kind of commitment to seeing the other is difficult,” Hauerwas continued, “because most of the time our temptation is to see the other in terms of our own narcissistic ego needs. In the letter, I explain, ‘I’ve begun with kindness because I believe kindness to be the very character of God.’ ”

Did you stop at that phrase? “Kindness is the very character of God.”

I told Hauerwas that was another potent line that could spark a vigorous discussion in a small group.

“But they have to get it right,” he said. “People think kindness is fundamentally a mode of tolerance that says: I won’t judge you. I believe kindness requires judgment to the extent that we are encountering the other honestly and we need to see the limits of the other. Challenging each other in our encounters is the way we grow in relationship to one another.

“Another thing people get confused about: We tend to think that kindness primarily is something we do for someone else. But, in fact, the most important form of kindness is our willingness to accept kindness from one another. It expands us to be treated kindly.”

“This discussion on kindness leads me to my two other favorite chapters in your book—ones that I’m sure to recommend to people,” I said. “First is the chapter on Christian humility, which I think is one of the best 12-page summaries of this virtue that I’ve ever read. I particularly like the way you contrast the classical Greek concept of ideals—which did not include humility—with the centrality of humility in the Christian life. Then, there’s the chapter on friendship.”

“In my life,” he continued, “friendship has been a central category I’ve been talking about from the beginning. True friendship is a relationship in which one or the other can expose their needs without an invitation to be manipulated. And, of course, friendship is central for Christians because God befriended us. Generally, in today’s world, we’re afraid to be befriended, but God first befriended us and refuses to go away. And that is a great gift, which takes some getting used to!”

GETTING USED TO PATIENCE

The irony of this book is that it was written over two decades and any reader, today, is likely to finish the book in a couple of days. If you spread it into a small-group discussion series, the book could last for a few months. But, as I said to Hauerwas, “There’s a problem with the time here. It takes a long time to internalize these virtues. I want to make sure that readers don’t miss your chapter on patience. I love that chapter because that’s where you step back and recall your own father, the master bricklayer.”

Hauerwas chuckled. “I learned about patience as I saw my father’s patience with me learning to lay bricks. Now, that’s a real skill and you learn that through imitation of a master. I remember as a young boy, I was about 15, he let me try my hand at laying brick. My first thought was to do that faster than anyone else! And, that was wrong! Learning to be patient in laying brick was absolutely crucial for me in knowing how to live well as a person. I would like to think that there is something of my father in me, after all these years.”

If you decide to engage with this new book, perhaps a little of the Hauerwas approach to life and faith will become a part of your life, too.

VISIT OUR BOOKSTORES—You’ll find lots of books that are great for small-group discussion in our own ReadTheSpiritBookstore and our new Front Edge Publishing Bookstore.