At the window, those unborn, those undone
Assemble with the frail paleness of moths,
An envious phosphorescence in their wings. 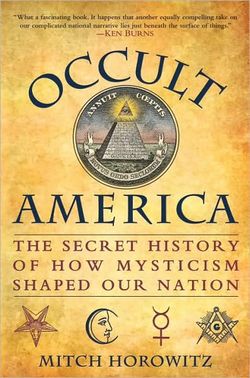 Many of the chapters in Mitch Horowitz’s new “Occult America” are strange tales—but the main point of his book is that even the oddest of ideas often made a way into American homes. Some ideas evolved into beloved aspects of our culture—like comfortable furniture in America’s spiritual living room.
Among the best examples of this in Mitch’s book is the Ouija board (pronounced either wee-gee or wee-jah). The mystic spelling board, which is marketed now as a children’s game, is no longer the best seller it once was. But, Ouija still shows up frequently in pop culture. A Ouija board figured prominently in one disturbing episode of “The Sopranos,” for instance.
Accompanying today’s final part of our story, we have (above) a few lines from a poem written by the ill-fated poet Sylvia Plath, most famous for her book “The Bell Jar.” She and her husband, the poet Ted Hughes, bought a Ouija board in 1956 and they each wrote a haunting poem using the title, “Ouija.” Plath’s is the creepiest of the two poems as she summons images of the spirits called toward the mystical board.
We’ve also got a portion of a U.S. Patent sketch of the board (below), courtesy of the folks at the William Fuld web site. And, you’ll see a famous Norman Rockwell illustration of the board in the 1920s, when Ouija seemed like a pleasant diversion. By the time Parker Brothers took over production, the game was regarded as a harmless excuse for girls and boys to spend an evening together. Today, the Hasbro company has all but expunged the Ouija board’s history in its marketing of the device.
However, in “Occult America,” you’ll learn the real story behind this artifact of Americans’ long fascination with contacting men and women beyond the grave. (Click here to read Part 1 or Part 2 of this series.)

HIGHLIGHTS (Part 3) OF OUR CONVERSATION
WITH MITCH HOROWITZ

DAVID: Religious experiments were a big part of American history—and they’re still unfolding across the American landscape today. One estimate places the number of small, experimental religious groups in the thousands. As a religion news writer for many years, I kept encountering these groups that would surface periodically in a public way, so I believe that estimate. In fact, I’ve heard the number of these small, independent spiritual communities might approach 10,000.
No one knows, of course. But what do you think?
MITCH: It’s not difficult to envision 10,000 new or independent or alternative spiritual groups in the country right now. And, one thing I’m seeing in many groups is an explosion of spirit channeling—people who claim to be in contact with spirits of others.
DAVID: It’s really a “return” to spirit channeling, isn’t it? This goes way back in American history.
MITCH: It does. The idea is that people are able to tap into some unseen entity or intelligence. They might call this getting in touch with an angel or a spirit guide or someone who has died—or some other conglomeration of figures from another dimension.
Generally, the idea is that these spirits want to help humanity or teach humanity. Of course, “channeling” is a later term for what people used to call mediums at séances.
DAVID: Another very popular term was spiritualist, going all the way back to the 1840s. For a time, this idea was everywhere. The Shakers, which were a Christian offshoot originally, had a period in their history when spirit visitations became very popular in Shaker communities.
MITCH: Spiritualists were people who believed in talking to the dead. They believed you could use séances, automatic writing and all kinds of different methods including the talking board to communicate with the spirits of the dead. The movement began roughly in 1848 and it became a huge movement in America. In the 1850s, probably one out of every 10 Americans to some degree or another engaged in spiritualist practices. DAVID: Now, that might seem like an antique notion from the distant past, but one important artifact of that movement—the Ouija board—still sits on shelves in lots of American homes.
MITCH: The Ouija board was a homemade sensation among American spiritualists. They called it “the talking board.”
The first reference I’ve found to the talking board is an 1886 newspaper article in the New York Daily Tribune describing the board as a big sensation among spiritualists in Ohio. A man says that it’s very easy to make. It’s an alphabet board and you can make all the parts with a pocketknife to carve it—or you can lay down the letters in ink. There’s even an image with this 1886 article that is the spitting image of the Ouija board we know today.
DAVID: In your book, you point out that there are a whole lot of popular histories that give William Fuld credit for “inventing” the board—but clearly boards like this were trendy before any patent was established.
MITCH: By 1891, a group of novelty manufacturers in Baltimore did succeed in patenting the talking board, which they called a Ouija board. If you compare the U.S. Patent sketches with the image in the 1886 New York newspaper article, they’re essentially the same thing.
This raises the question of whether the Ouija board should have been patented at all. How could you patent something that’s already widely used in this big craze among spiritualists? But I assume the U.S. Patent office wasn’t following trends in spiritualism very well.
DAVID: It was a pretty complicated patent case, right?
MITCH: Yes. For many decades, the Ouija board was embroiled in endless legal disputes. Even into the 1920s there were very complex and arcane disputes over this or that issue. It took a long time for the courts to work through all the claims.
When the dust settled, William Fuld controlled the patent. In popular accounts to this day, he’s usually identified as the inventor of the Ouija board, but of course he’s no such thing. Not only was he not on the original patent, but this whole Baltimore production of the board came along well after the board was in popular use. DAVID: So, here are God-fearing, church-going, middle-American families snapping up this amazing artifact of the 19th-century spiritualist movement. I think Sylvia Plath’s and Ted Hughes’ poems in the 1950s perhaps are closer to the real spirit of the thing—describing this whole army of spirits gathering around the Ouija.
MITCH: Americans loved the board! Norman Rockwell was able to paint a Saturday Evening Post illustration of Ouija and have gentle fun with it.
DAVID: Eventually, the early craze faded—but it was reignited big time in the 1960s when Parker Brothers bought the rights to the game.
MITCH: It did. In 1967, Ouija outsold Monopoly, the other big Parker Brothers hit at the time. They bought Ouija in 1966 and in 1967 they reported selling 2 million boards, which topped Monopoly. That was Ouija’s banner year and it never sold that well again but it gives you a sense of just how vast this trend was.
DAVID: Somehow, American Moms and Dads were comfortably forgetting about the board’s creepier associations.
MITCH: More recently, the toy company Hasbro, which now owns Parker Brothers, has sought to play down the occult roots of the Ouija board. It’s interesting that Hasbro publishes online histories of some of its more popular games—but there’s no history from Hasbro that I can find for Ouija.

DAVID: I doubt that most Americans are aware of this history—even if they’ve got a Ouija board tucked away in a closet. It’s amazing to me how so many ideas that might have started out as eccentric can wind up domesticated and fully accepted as a part of everyday life.
MITCH: That’s American culture! The talking board began with spiritualists, something that a lot of Americans once feared. But today it’s just a fun and folksy part of Americana, plain and simple.
DAVID: In the end, your book shows this principle at work, over and over again. On one level, Americans appear to be almost exclusively Christian. At least, that’s what the vast majority of us tell pollsters. But we’re always open for experimentation. I think that’s one of the main conclusions of your book.
MITCH: I think America is in a very healthful place religiously. Many people may decry alternative spirituality as wrong or they may call it “cafeteria religion.” Some people criticize what we might call newer philosophies as lacking values or morals. But this hasn’t been my experience at all. Ethical and moral viewpoints run through many newer philosophies.
This is part of a long history. For hundreds of years in America, groups have sprung up and grown into very rich movements. America is not a stagnant pond spiritually. America is a mightily rushing mountain stream.
Some communities are not as open as others. There may be suspicions of this group or that group—but we have a constitution that prevails and protects religious freedom. That’s all to the good, I think.
This all is a sign that the American experiment still is alive and working well.