FROM OUR MAN “008” IN ISTANBUL: You may have expected that this story would be a movie review, based on the European early release of the new James Bond movie, Skyfall. European journalists are calling the latest film a triumph and Americans are likely to flock to theaters when the movie finally debuts here on November 9.

But today our question is: Where in the world is our own resident James Bond expert? He’s not in the U.S. Rather, the Rev. Dr. Benjamin Pratt is in Turkey. This is no joke. Dr. Pratt—author of our popular James Bond Bible study book—actually departed for Turkey last week. Of course, the eyes of all true Bond fans around the world are turning to Turkey at the moment, because some of the most eye-popping scenes in Skyfall were shot around landmarks in Istanbul. Dr. Pratt and his wife traveled to Turkey to see major landmarks, including ancient Christian settlements from biblical times. Still, we have to wonder—considering Dr. Pratt’s nickname among good friends, which is “008,” our question is: What is the intrepid Dr. Pratt uncovering in Turkey?

We know where Dr. Pratt will pop up when he returns from Istanbul. He is appearing in news reports nationwide about his latest book on caregiving. In addition to his literary scholarship, another of Dr. Pratt’s lifelong specialties is pastoral counseling and expertise in caregiving. So, don’t be surprised if you see or hear him soon in news reports over the next two months, talking about his Guide for Caregivers.

But back to Bond! Now is the time to organize a Bond Bible study group in your congregation. If you schedule your group in November-December, you will capitalize on the excitement of the Skyfall release. If you schedule for January, you’ll reap the interest of the families that wind up with the Bond 50th Anniversary boxed set of movies as a Christmas gift. If you schedule for Lent or spring, you’ll chime in with the millions of Americans awaiting a DVD, Bluray or Netflix release of Skyfall. (In fact, the big 50th anniversary set comes with an empty slot in the fancy box to place the Skyfall discs when they are released.)

WHY A JAMES BOND BIBLE STUDY IS SMART 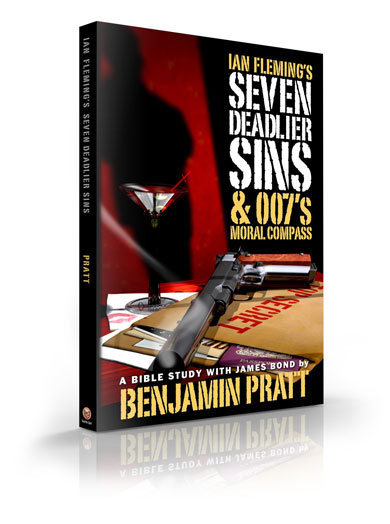 Please visit Dr. Pratt’s author page and also visit the page packed with information about the book itself. Click on the various stories indexed on those pages. You will discover that the idea of organizing a James Bond Bible study is far from a pop-culture whim. Ian Fleming himself had a lifelong fascination with religious principles. Specifically, Fleming was deeply concerned with sin. That’s not to say Fleming was a sinful man himself. Rather, he was a prominent editor at the Times of London. In the post-World War II era, he convened some of Britain’s leading authors to write about the so-called Seven Deadly Sins. When planning his own James Bond novels, Fleming set out to explore seven even deadlier sins in our modern era.

Dr. Pratt’s James Bond Bible study book has been used successfully in congregations across the U.S. and as far away as New Zealand and Panama. In addition, U.S. military chaplains in Iraq used Dr. Pratt’s book with groups of soldiers in the field. All groups reported enthusiastic interest in such an unusual approach to Bible study. They also spotted an encouraging trend with this particular book: inactive church members and first-time-Bible-study students were attracted to this particular discussion.

Front and center in Fleming’s own life—and in Dr. Pratt’s book—is the New Testament book of James. The top story this week on the front page of our ReadTheSpirit magazine is an interview with Bible scholar Marcus Borg, who also discusses the importance of James. Organize a discussion group in your community now; order your James Bond Bible study books early; and—BANG! You’ll draw a crowd!