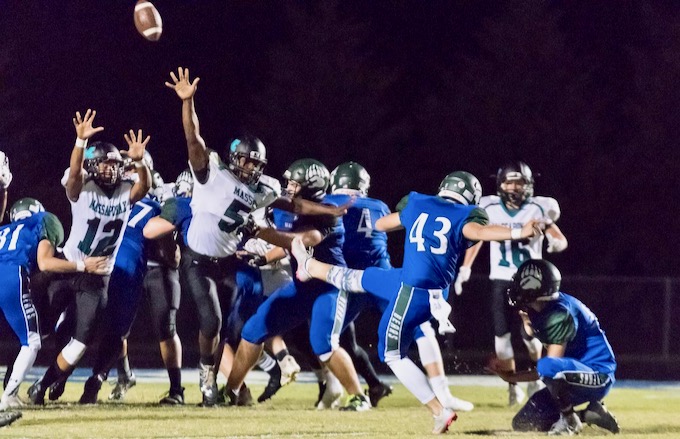 Austin in his prime as player No. 43.

When we watch mighty giants collide on the gridiron, we might think that football is a suitable metaphor for war. But as a part-time coach and a father, I can tell you: For the best in amateur and professional teams, the real struggle lies within the heart of each player.

In my monthly columns, I explore the spiritual realms that lay outside houses of worship—the world where one in four Americans looks for wonderment and meaning, these days. Right now many harvest-season rituals are unfolding within the world’s religious traditions. Jews just marked the week-long festival of Sukkot. This week, Hindus, Jains, Sikhs and some Buddhists will begin the Diwali festival of light overcoming the autumn darkness. As colors change outdoors and frost greets us many mornings—all of us are pondering deeper life lessons in autumnal cycles.

For millions of Americans, one of the most eagerly anticipated fall cycles is the football season. Gallup and Pew researchers have tracked football’s popularity over the past decade and, despite controversies, it remains Americans’ favorite sport.

Depending on when Americans have been polled across the past decade, between 40 and 60 percent of us have told pollsters we look forward to these games. That makes sense. Beyond the games themselves, hit movies and TV series have celebrated football. We know all about the pride of American small towns in their local teams, the headline stories involving elite professional players—and the millions more of us who tune in the Super Bowl each year just to host a great party—or to enjoy the clever new TV ads.

But there is something much deeper in the souls of players that unfolds before, during and after h each game—an experience that certainly touches on spiritual realms.

My column this month is as close to home for me as my son’s battered football helmet with these words inked across the brow: “The Fight Within.” 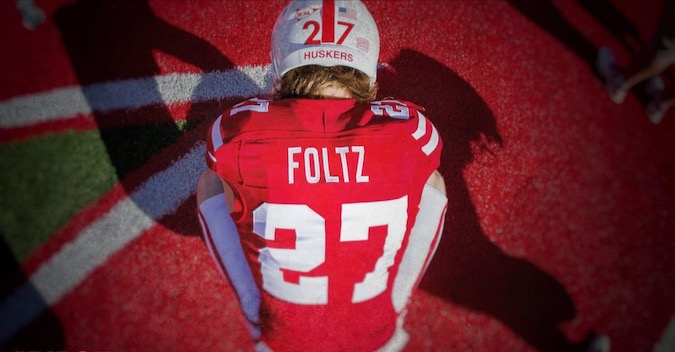 My son Austin brought those powerful words into our family, given to him by Sam Foltz, the star punter at the University of Nebraska.

Do you remember Foltz’s story? Here is how it unfolded—and forever marked Austin’s life.

Austin showed great promise playing football during his high school years. Eventually, he was invited to the prestigious, invitation-only Kohl’s National Scholarship Camp in Wisconsin in 2016. Austin’s invitation came from Jamie Kohl, the camp founder, who was impressed with Austin’s performance at a Kohl’s event at the University of Virginia earlier that year.

One of the players assisting with the camp that year was Foltz, whose role was to mentor the younger punters—an assignment Foltz carried out with personal passion. In those few days at that camp, Foltz’s own years of hard-earned wisdom connected with Austin’s challenges.

Austin was a rising high school junior, bursting with talent, but struggling to gain command of his kicking game. Wracked with doubt, frustrated with his inconsistency as a punter, and worried heading into summer camp that he might not win the starting job, he found in Sam Foltz a true friend.

Foltz shared with Austin his own struggles, and helped him understand that his battle was not with his fellow campers, or with the players he would be competing against at Riverbend High School for a starting slot. Rather, Foltz said, he only had to focus on the fight within.

That morning, the driver lost control of the car on a wet road and hit a tree. Foltz and Sadler were killed at the scene. (Here is a 1-minute video of the University of Nebraska’s moving “missing-man formation” tribute to Foltz.)

Austin was devastated by Foltz’s untimely death—and dedicated his season to Foltz.

Over the next two years, Austin was among the premier high school kickers in the state of Virginia, won numerous awards, several college scholarship offers, and set several kicking records at Riverbend. He managed this by embracing and living three words that he had inscribed on the padding inside his helmet, “The Fight Within.”

Regular readers may recall that Austin walked away from a college football scholarship to join the United States Marine Corps. Still, every day, he continues to wage the fight within.

Regardless of the problems we face

Football teaches players not only to face their struggles, but to put those troubles in perspective and manage them in a way that allows them to work the problem while not letting down their teammates.

As a member of a team, each man knows that come Friday night, regardless the problems they face, they will take the field against an opponent as eager to win as they are. This reality requires every player to learn to place team over self. To master the struggle within for the betterment of those around them.

At times, of course, injuries or extreme situations mean players cannot take the field with their teammates. And in these moments, players rally together to fill the void. The mentality is “next man up.” Ready or not, the next man has to take the field.

I’ve seen this played out multiple times this season. I’ve been within feet of violent hits that forced players to leave games, and watched as those who couldn’t earn a starting job suddenly be forced into service.

The overall quality of their performance sometime surprises. Other times, it quickly becomes evident why they were back-up players and not starters. Regardless of the realities of what happens on the field, however, without fail their teammates rally around and urge them on. Offering support and advice when he is on the sideline, and yelling instructions and encouragement when he is on the field.

Us vs. Them? Or a larger community?

Learning to handle the struggle within involves a skillset that too many adults fail to master. Every young football player is afforded an opportunity to learn in the very earliest stages of their lives.

As a coach, I work daily to help young players understand and manage their time and the vast expectations that are placed upon them. Their internal struggles can take many forms. Some are related to the game itself (injuries, learning assignments, mastering playbooks). Others are associated with the schools they attend (maintaining grades, learning to manage the higher expectations that come with being a member of a football team). Still others are related to the personal struggles we all face.

As players learn to focus on the struggle within, and the way they form solid bonds with other players facing similar challenges, they learn that the world is not divided into “us” and “them.” The other team is part of a larger community—which may seem like a simple lesson but clearly is missing in a lot of our national and international conflicts these days.

Those who play football share great respect for one another. The other team they line up against for four quarters of action may represent the enemy, while on the field. At the end of the game, they appreciate the sweat and work of their opponents. It is a community, in the very best sense of that word.

Anyone can see the respect played out when the game is over, and the teams line up at midfield to shake hands.

But those are not the most telling examples I have seen. The more compelling signs are in the pat on the head that a player on the receiving end of a big hit gives to the man who hit him. Or, as happened to me two weeks ago, it’s an opposing backer crashing into the sidelines to make a play and hitting a coach instead of a player.

After that player nailed me, his first words to me were a sincere: “Are you OK, coach?”

Strife and violence are inevitable components of life. Learning to find the common good in our enemies, however, is essential to moving us toward peaceful resolutions that yield a better world for our children.

A Game worth Cheering

Football is not for everyone–not to play, not to watch. But football, I believe, is one of the few communities in our world that encourages young men to learn to harness aggression, stand tall in the face of struggle, and respect even those who for four quarters on a Friday night want nothing more than to stop them in their tracks.

It’s not a perfect game. But then, nothing in life really is.

Life, like football, is brutal. Football teaches us to face brutality head on, and not be broken by it. To use force intelligently, while respecting those you face. And to win the greatest struggles of all: The fight within ourselves, whatever shape that takes.

For all these reasons, football is a game worth cheering.

The following video is less than 5 minutes, illustrating the high spirits aroused in football. Austin appears very briefly at the 1:41 mark. He’s writing on his wristband.

What is he writing? What he wrote before every game: “The Fight Within. #27 Sam Foltz”