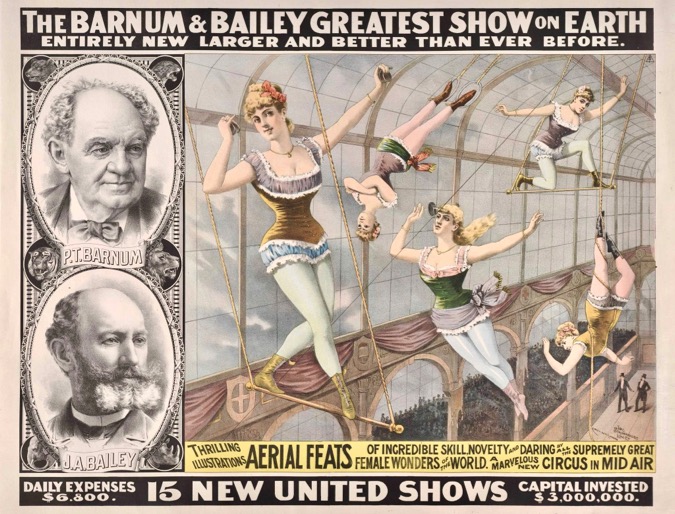 REVIEW OF ‘THE CIRCUS’:
Step right up! 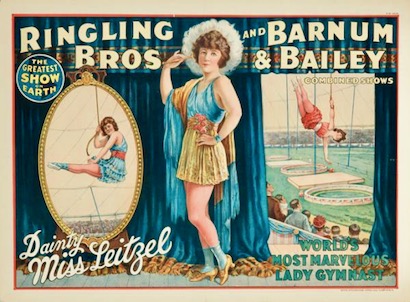 Lillian Leitzel is just one of the many fascinating performers you’ll meet in this series. Before her tragic death, she was one of the world’s most famous aerialists.

The Greatest Show on Earth is gone!

No, wait! It’s back with more interest than ever in the sheer diversity a circus represents. Since its release in late 2017, The Greatest Showman already has become the third-highest-grossing movie musical in history. A combination of great music—and a timely celebration of diversity among P.T. Barnum’s remarkable performers—has made the movie and its soundtrack a smash hit that’s likely to keep resonating for years to come.

Now, PBS’s American Experience series is airing a vast, four-hour salute to the history of the American circus—with its main focus on the same P.T. Barnum story showcased in the award-winning movie musical.

Too bad the actual circus closed before these movies opened! On May 21, 2017, the Ringling Brothers and Barnum & Bailey circus closed after 146 years with a final performance on Long Island. The New York Times story of that final show began this way:

UNIONDALE, N.Y. — The lights went up on the Ringling Brothers and Barnum & Bailey circus on Sunday evening to reveal 14 lions and tigers sitting in a circle, surrounding a man in a sparkling suit. It was a sight too implausible to seem real yet such an iconic piece of Americana that it was impossible to believe the show would not go on. After 146 years, Ringling Brothers and Barnum & Bailey is closing for good, responding to a prolonged slump in ticket sales that has rendered the business unsustainable. … The circus—with its 500-person crew, 100 animals and mile-long trains, which moved around the trapeze and its artists, the high wire and its tightrope walkers, the motorcycles and the daredevils—had become infeasible in an age in which video games and cellphone screens compete to provide childhood wonder.

Truth be told: The Times story was a bit misleading, as this new PBS documentary shows us. At its peak, the Greatest Show on Earth toured with far more than 1,000 men, women and children in its crew, plus more than 700 horses—and more than 1,000 other animals.

That’s the scope of the truly “Greatest Show” that PBS brings us in The Circus.

WHY P.T. BARNUM WAS A GENIUS
(AND JAMES BAILEY,
AND THE RINGLING BROTHERS, TOO!)

The entire first night of The Circus covers P.T. Barnum’s exploits with his traveling circus. Part 1 of the documentary ends with Barnum’s death. Certainly, Barnum’s story is exciting!

However, the real discovery in this documentary are the lives of James Bailey and the five Ringling brothers, who most Americans living today know only as an obscure part of the circus’s name. The truth is that Barnum’s instinct for publicity already is well known, especially after Hugh Jackman played the showman in the 2017 musical. What you will discover in The Circus is that Barnum would not have succeeded without the brilliant strategist James Bailey—followed by the multi-faceted talents of the Ringling brothers.

The Circus points out that Barnum was famous for showcasing strange-looking and, in many cases, disabled men and women as attractions in his sideshow. At one time, activists decried the sideshow as abusive. However, right now, our viewpoints on the treatment of these performers is changing—in part because of the movie’s spin on diversity. The documentary points out that a number of Barnum’s most popular oddities actually saw this as a wonderful opportunity for fame and a successful career. Yes, some of these performers were wounded by taunts from the crowds—but others took it all in stride and thrived. 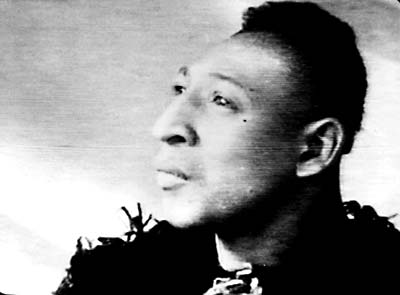 One of the most famous, included in this film, was the performer known as Zip the Pinhead and also the Dean of Freaks. He performed for more than 60 years, capitalizing on an oddly shaped skull and a fanciful story that he was a “missing link … captured in Africa.” In fact, away from the sideshow, William Henry Johnson had warm relationships with friends and family; he was a vigorous athlete; and he once broke character to save a drowning girl at the Coney Island beach.

The documentary touches on issues of animal welfare, the low pay for most laborers and the many life-threatening dangers of the trade. But the film also stresses that the Ringling Brothers, in particular, were famous for instituting a moral code on the crew. They also brought in Pinkerton security guards to drive away pickpockets and con artists. While the Ringling Brothers failed in other areas of moral judgment—for example, they enforced racial divisions for many years—The Circus argues that this traveling community of circus nomads were mirroring—and often heralding—changes in America’s conscience.

What’s truly remarkable in this history is that the Ringling brothers welcomed the women’s suffrage movement and allowed the women who starred in the circus to publicly advocate for giving women the vote. The film shows that the highly athletic women who headlined the circus took this very seriously and met with other leaders of the suffrage movement.

Fans of American history will find lots of surprises! For example, when electric lighting was first invented, circuses carried these amazing lighting systems nationwide—before any U.S. cities were wired for electricity. The circus turned into a barnstorming campaign for electrification.

The same thing happened when Thomas Edison invented the motion picture. The circus added a “Black Top” where Americans got their first chance to see movies projected on a screen! Once again, the circus turned into a vast campaign for the fledgling movie industry.

THE SPIRITUAL SIDE OF THE CIRCUS 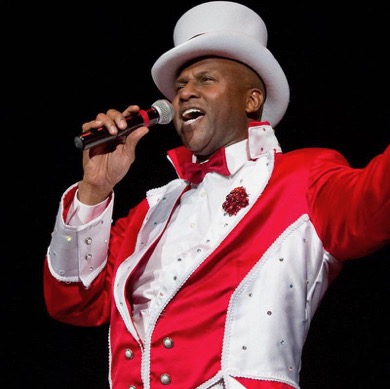 The other inspiring theme that runs throughout the four hours is the spiritual aspirations the circus embodied. Countless American children dreamed of running away with the circus. The performers were close to real-life superheroes showing people the great potential of the human body. Before fantasy novels and fantasy movies were all the rage, the circus was a glorious fantasy world.

Some of the best analysis of this spiritual side of the circus comes from Jonathan Lee Iverson, who was the first African-American Ringmaster in the circus’s history and played that prestigious role from 1999 through the show’s final performance in 2017.

We should expect no less from him. Wikipedia kept a running list of media notices about Iverson:

Here’s one of Iverson’s best reflections from The Circus: “A circus is a peek into what could be. It’s about conjuring your own miracles. We come to the circus for—the transcendent.”