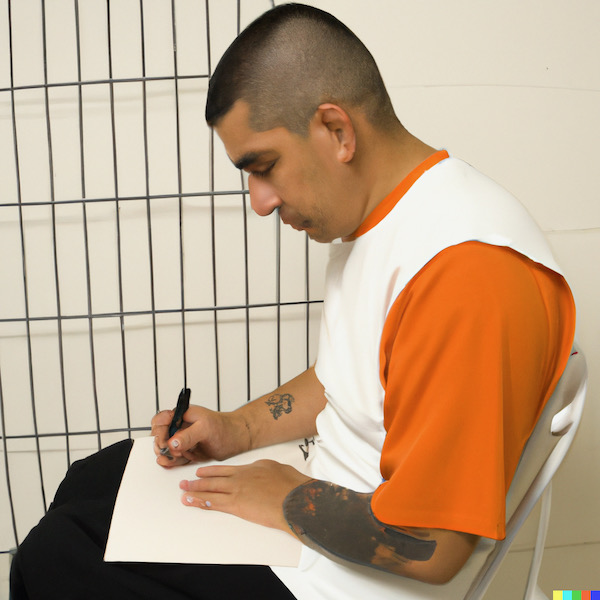 For many years, America has responded to crime and conflict with the mass incarceration of millions of souls—by far the highest rate of imprisonment in the world, including nations that we consider especially draconian. One out of every five people incarcerated in our world today is in our American prison system. 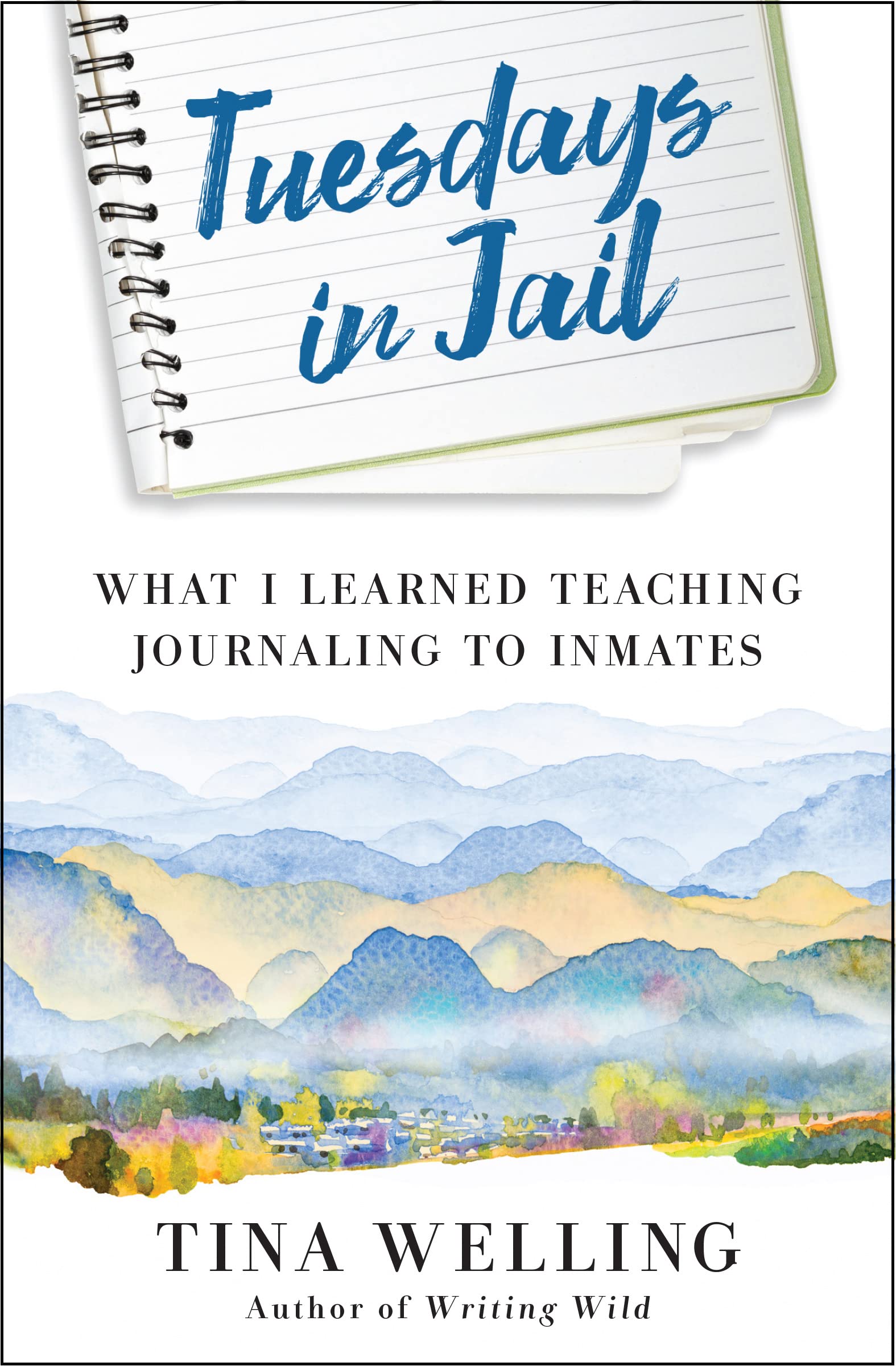 Are there any signs of hope? Of course, and you can read more about some of those efforts to address mass incarceration at the end of this article.

But there also are many grassroots efforts spreading across the U.S. And, for more than a decade now, one of those fruitful efforts has been author Tina Welling’s volunteer “journaling” workshops that have begun unlocking many of those imprisoned souls in ways that may help prepare them for life after imprisonment.

She describes her unique approach to teaching writing in her inspiring new memoir, Tuesdays in Jail—What I Learned Teaching Journaling to Inmates, which is available now from Amazon in paperback and Kindle versions.

“The one quality I continue to encounter is low self esteem among those who are living in this system,” Welling said in an interview about her new book. “And such low self esteem makes it harder to have a real relationship with someone after you get out of this system again. To continue to pummel someone who has low self esteem is not good for our society. I hoped having the inmates write and talk about their inner lives would make them more human—and would build their self esteem. And, in many cases, that has worked. You can read the stories in this book.”

In the middle of her book, she describes her goal this way:

“I wanted the men who came to the journaling workshops to know that dignity resided in a place where no person or circumstance could rob them of it. And that was a challenge when, following our workshop, each man would endure a body search before being led back to his cell. And yet there was no better time to learn tha you were not the victim you were treated as. If the inmates could acquire a sense of self-worth under such circumstances, I imagined they could own it almost unchallenged for the rest of their lives.”

Outreach to our imprisoned neighbors is central to our religious traditions

We are recommending her book to our readers for individual reading—and for small-group discussion in your congregation or community—because we know our magazine’s community of readers includes lots of other authors, journalists, educators and community leaders who feel a similar calling to somehow reach out to America’s enormous imprisoned population.

In fact, that mandate is central to the teachings of Catholic and Protestant churches as well as other faith traditions.

When you read Tina’s words—”dignity resided in a place where no person or circumstance could rob them of it”—she is echoing a key emphasis of Pope John Paul II’s teaching about the dignity of each soul. “The evil of our times consists in the first place in a kind of degradation, indeed in a pulverization, of the fundamental uniqueness of each human person,” he wrote.

However, the interconnections between inmates’ lives and religion is complex. Sometimes, “religion” and the earliest religious images and models in our lives can be part of the problem.

When religion is a part of the problem

Tina does not represent any particular religious tradition in her work, but often has found herself interacting with her workshop participants as they wrestle with spiritual questions in their own lives. She brings a broad-based approach to those conversations, ranging from Christian and Buddhist wisdom to her own deep awareness of spiritual insights that arise from the natural world. (For more on that, you might also enjoy her earlier book, Writing Wild—Forming a Creative Partnership with Nature, also available from Amazon.)

Tina’s approach—which she describes in the many true stories in Tuesdays in Jail—always springs from questions she brings to her sessions. She never preaches or attempts to prescribe her own solutions.

“I do bring my own awareness of universal spiritual truths into my work, but I never talk to inmates in specifically religious concepts,” Welling said in our interview. One reason she draws this strict line is that she sometimes discovers that experiences with “religion”—or with “religious people” in the inmates’ lives—are associated more with trauma than with health or wellbeing.

“A lot of inmates have had hard experiences with ‘religion,'” Welling said. “Some of that started very early in their lives, sometimes in childhood with feelings of abandonment from parents and people who are supposed to be our first loved ones. When you’ve gone through that, it’s hard to come away with images of a God who is loving. If we grow up slapped, shoved side or suffering even worse abuse, this can really make it hard for people to feel there’s anything good out there in the world.”

She forged her unique approach over many years and the true stories she shares in the book are guaranteed to inspire readers, perhaps to encourage the creation of similar programs. (For more about the growing consensus of concern about this issue and ideas for such programs, see the links below this article.)

Finally, she gives us a 22-page workbook

Perhaps the most practical asset in Welling’s new book is a 22-page “workbook” she gives us, bound right into the book itself.

Just before those workbook pages, she explains to readers why the workbook was created:

“In March 2020 the pandemic closed the jail to the public. The inmates were allowed no visitors and no journaling workshops. I can’t imagine how that multiplied the miserable march of days for the incarcerated men and women. In an effort to offer the inmates a guide toward looking inward and conducting their own inquiries, I created a workbook that simulated our time together in the journaling workshops. … The workbook consists of 15 lessons. Each lesson offers five questions and is accompanied by a few of my favorite quotes. I hope the questions and quotes provide readers with new pathways as they engage in their own journeys inward.”

In fact, that workbook can be used by anyone interested in starting to write in a journal.

In closing our interview, Welling said she hopes readers will use the workbook and recommend it to friends.

“Journaling is a powerful tool for self knowledge and self awareness,” she said. “Ask yourself questions and just write. You’re going to discover so much more about your life and yourself. Among other things, I also hope people will write about what they feel gratitude for.

“There’s so much power in writing by hand on paper. That process incorporates your body, mind and spirit and emotions—as you try to pin down all of that with language. When we do this, we learn more about ourselves than we knew before we started writing.”

Wikipedia has a lengthy overview of America’s history of incarceration. Links from that article go into far more depth on many related issues. There’s also a comparison chart of incarceration rates around the world.

Wondering about that opening quote with this article? Adam Gopnik’s landmark report appeared in The New Yorker, headlined: The Caging of America? Why do we lock up so many people?

A landmark document: One of the most frequently cited critiques of America’s mass incarceration is this report for Human Rights Watch in 2006 by Jamie Fellner.

Major newspapers, including The New York Times, have been regularly reporting on the problem of mass incarceration. Here are just a few of the many Times articles worth reading on this issue:

And more on the role of religion

There’s a powerful encouragement of visiting prisoners in both Catholic and Protestant traditions, which also means there are well-established organizations within major mainline denominations to help people organize new outreach programs into prisons. You don’t have to invent a program by trial and error.

You can reach out to others for guidance. In fact, reading Welling’s book provides lots of ideas. For example, toward the end of her book, she describes the volunteer work of her friend Ben who figured out a number of very practical ways he could help prisoners make a healthy transition after incarceration.

Millions of Americans have heard this appeal to help. The Catholic church teaches that visiting the imprisoned is an important work of mercy. Pope John Paul II wrote extensively about the unique, priceless value of each human soul, including prisoners. Pope Francis has followed that example.

At the root of Protestant prison ministries is John Wesley, the founder of Methodism, who began visiting prisoners while he still was a student and encouraged his friends to do the same. Among the services these early Methodists offered to prisoners were “teaching them to read, paying their debts, and attempting to find employment for them,” according to the Encyclopedia Britannica biography of Wesley. Throughout his life, Wesley continued to pay regular visits to prisons and encouraged all Methodists to organize similar prison outreach programs.

Nearly every mainline denomination offers a national program of training in prison chaplaincy. Beyond those formal programs, there are hundreds of grassroots outreach programs as well. For example, here is one of many United Methodist resources on prison ministry—a list that includes a group that makes recordings of incarcerated Moms reading books for their children.

And here is the gateway to Catholic Prison Ministries Coalition. Plus, here’s a more direct link to that organization’s Resources section.