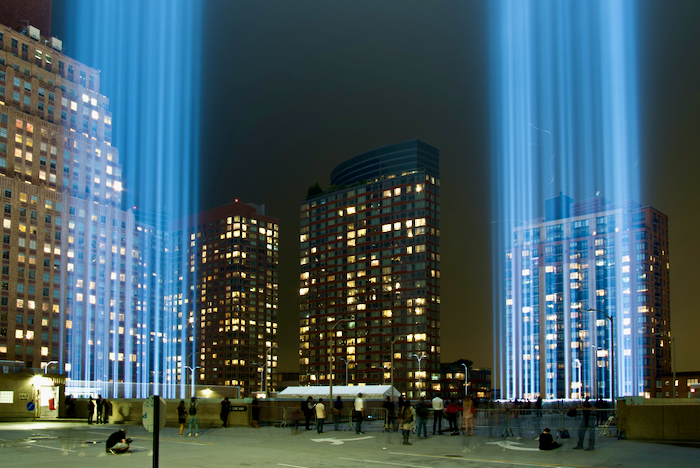 THE PEOPLE BEHIND THE ‘TRIBUTE IN LIGHT‘—This photo of  New York City 9/11 memorial lights that visually represent the Twin Towers also includes many of the professionals making it happen. Can you see them standing there, tending these lights? This year, the state of New York is sending special resources to make sure the 9/11 tradition continues safely even in the COVID pandemic. Remembering 9/11 is that important—especially now.

Each Sept. 11 has tortured my extended family since the terrorist attacks on that date in 2001. This year’s anniversary will be a little different for me, but no less agonizing.

That’s because I’ve spent the last year writing a book about how the murder of my nephew, Karleton Douglas Beye Fyfe, a passenger on the first plane to smash into the World Trade Center, caused various kinds of trauma in my family and how terrorism rooted in mutilated theology has ravaged not just us but the whole world.

The book—Love, Loss and Endurance: A 9/11 Story of Resilience and Hope in an Age of Anxiety—will be published early next year with a section devoted to how people can counter the kind of strait-jacketed, monochromatic thinking that can (and often does) lead to violence.

The writing process required me to go through page after page of saved, printed-out e-mails from family members—along with various other notes and clips of columns and blog posts I’ve written about all of this. Much of it was for The Kansas City Star, where I was an editorial page columnist at the time the hijacked planes crashed in New York, Washington and Pennsylvania.

Each note, column, blog, letter and photo has stabbed my shrapnelled heart with memories of Karleton—or KDBF, as we often called him. At the time of his murder, he was 31 years old with a wife and a toddler son.

Just days before he boarded American Airlines Flight 11 in Boston, where he was a bond analyst for John Hancock, his wife Haven told him she was pregnant again. Parker was born in May 2002. That was just a month before my own first grandchild was born—but because of 9/11, I didn’t see her until she was 10 days old. At her birth, I was on a reporting trip to Saudi Arabia, Egypt, and Uzbekistan to help my readers understand Islam, the ancient, honorable religious tradition that the hijackers slimed by acting in ways that showed they didn’t understand the first thing about it.

So day after day this past year I’ve been reliving the first miserable year without KDBF, with whom I was very close. And then the second year and the third and on and on.

From that experience, the idea of absence speaks to me most profoundly. In these 19 years, Karleton has missed not just the birth of a son but also family birthday parties and family weddings, including that of his first cousin about two weeks after 9/11. He’s missed being part of the lives of his parents, his two sisters and their remarkable children. And he’s missed an inevitable move up a career ladder that had pegged him as a future financial world superstar—though one, I quickly add, who knew that money should be no idol but, rather, a way to free people to live generously, energetically, productively.

Multiply my family’s wretched experience by nearly 3,000 to account for the other people slaughtered on 9/11—and then by tens of thousands more to get some sense of the kind of dreadful results from a long list of domestic and international terrorist attacks, from Paris to Bali, Pittsburgh to El Paso to Mother Emmanuel A.M.E. Church in Charleston, S.C.

The world’s great religions all teach love, compassion, mercy and the infinite value of each human being, no matter what. And you can find inspiring examples of people living out those values in many places.

But there also are followers of those same faith traditions who are so certain they know all the answers before they even hear the questions that they imagine God has deputized them to bring discipline and punishment to people who don’t agree with them.

Beyond that, in recent years the U.S. political system has encouraged binary thinking—yes or no, black or white, blue or red in a world that desperately needs people to appreciate paradox, mystery, myth and allegory, people who understand what I was talking about when I titled my last book The Value of Doubt.

Complications: Some members of Karleton’s family didn’t want me to write this new book, while Karleton’s mother, my sister, told me she’s been waiting for a long time for me to write it. It won’t tell our family’s whole story, just my view of that. And it won’t give final answers to how to stop the blinkered thinking that leads to uncompromising dogmatism because those answers only now are beginning to emerge.

But for the 19th anniversary of 9/11 this year, I hope you’ll join my search for ways to stop one-track theology that’s marinated in false certitude. That would honor not just Karleton but everyone who has perished at the hands of extremists as well as the families who have had to find a way forward in their absence.

Bill Tammeus, a Presbyterian elder and former award-winning Faith columnist for The Kansas City Star, writes the “Faith Matters” blog for The Star’s website and columns for The Presbyterian Outlook and formerly for The National Catholic Reporter. His latest book is The Value of Doubt: Why Unanswered Questions, Not Unquestioned Answers, Build Faith. Email him at [email protected].