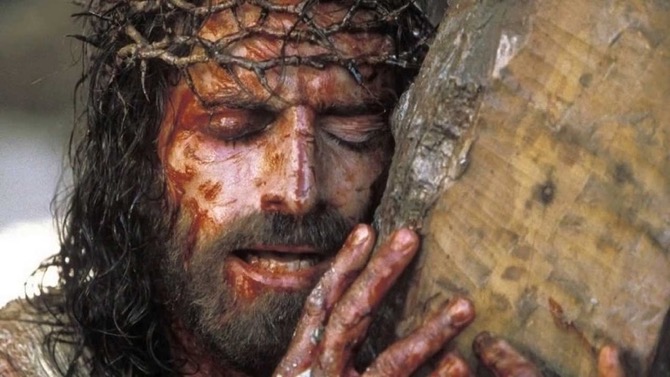 Can you name the film released in 2004 that received three Academy Award nominations? Extremely bloody and violent, it did very well at the box office, grossing over $600 million worldwide. It remains the highest-grossing R-rated movie in history.

Answer: The Passion of the Christ, written and directed by Mel Gibson. The movie portrays the life and death of Jesus, in particular the last 12 hours of his life. The scenes of Jesus being flogged and crucified are presented in graphic detail, and are very hard to watch.

The word “passion” comes from the Latin word passio, which means “suffering.” We sometimes forget this when we speak of romantic passion, or the passion that someone has for a hobby or sports activity. The root of the word passion is suffering, which was made very clear in the Mel Gibson movie about Jesus.

Caviezel and Gibson Are at It Again

Newspaper reports over the past couple of years have said that Gibson is working on a sequel, which will may be called The Resurrection and will focus on the three days between the death and resurrection of Jesus.

Recently, the actor who is playing Jesus for a second time, Jim Caviezel, told USA Today that it “is going to be the biggest film in history. It’s that good.” Some people are calling it The Passion of the Christ 2.

Why Compassion Is Closer to Jesus’s Ministry

The Gospel of Mark tells us that when Jesus encountered a large crowd, “he had compassion for them” (6:34). This verse does not come from the three days between the death and resurrection of Jesus, nor from his last 12 hours. Instead, it comes from a time much earlier, when Jesus was performing his ministry in the region called Galilee. If I were to make a movie about this time period, I would call it The Compassion of the Christ. Not Passion, but Com-passion.

Compassion is such an important word in Scripture, and it doesn’t take long to figure out what it means. Passio means “suffering” and the prefix com means “with.” Put the two together and you get “with suffering” or “suffering with.” Jesus shows compassion towards the people around him, which means that he “suffers with” them.

In the sixth chapter of Mark, Jesus and his disciples are traveling the countryside, casting out demons and curing the sick. They are working so hard that they are not finding time to grab a bite to eat. So Jesus calls the apostles to hop into a boat with him and go away to a deserted place, to enjoy some rest and relaxation.

But the desperately needy people of the region see where Jesus is headed and hurry on ahead of him. When his boat hits ground there is a huge crowd waiting for him. Although he is weary, Jesus isn’t annoyed that his much-deserved day off has been interrupted. He isn’t irritated that these people are unable to help themselves. He isn’t even frustrated that the need all around him is so enormous.

No, Jesus has compassion for them. He “suffers with” them. The Greek word for compassion, splagchnizomai, is even more graphic than the Latin word—it means to be moved by something so strongly that you feel it deep in your stomach, deep in your bowels, deep in your guts. Jesus has a sympathetic awareness of the distress of the people around him, combined with a strong desire to alleviate it. Mark tells us that he has compassion because they are “like sheep without a shepherd; and he began to teach them many things” (6:34).

Are We Ready for Jesus’s Compassion?

I recently learned that the median annual income in Fairfax, Virginia, where I serve as a pastor, is $80,800. If you make that much, you can afford to live in Fairfax. But if you are a minimum-wage worker, you would have to work more than five full-time jobs to earn that amount.

Yes, that’s right: More than five full-time jobs. More than 200 hours of work each week! That’s impossible, of course, since there are only 168 hours in a week. That is why I feel challenged to work to preserve affordable housing in Fairfax, and why the development of housing is a priority in the congregation I serve. Otherwise, minimum-wage workers—men and women who work so hard in our community—are going to have to move away. I think that Jesus has compassion for families who need affordable housing; I think he suffers with them. Because of this, I want followers of Jesus to be moved with pity from the depths of their guts, instead of being merely annoyed, irritated, and frustrated by the problems they see all around them.

Focusing on Compassion Every Day

As Christians, at our best, we try to focus on Christ’s compassion each day. That’s certainly a daunting spiritual challenge for anyone, because Jesus showed how far compassion should extend. We are called to suffer with people—people who are young and old, male and female, black and white, moral and immoral. According to Mark, Jesus helps everyone, without discrimination, and without asking how they managed to get in trouble in the first place.

This point is important, because there are people today who are quick to pass judgment on people who are homeless, poor, or ill with one of the “diseases of poverty”—tuberculosis, malaria and AIDS. Mark tells us that wherever Jesus went, “into villages or cities or farms, they laid the sick in the marketplaces, and begged him that they might touch even the fringe of his cloak; and all who touched it were healed” (6:56). Yes, all who touched it were healed. Jesus healed everyone, without discrimination.

I believe that the very same approach can be taken by anyone today who has a sympathetic awareness of human suffering, and who offers help in a generous and nonjudgmental way. Such people are playing parts in a sequel to the blockbuster that Jesus starred in, The Compassion of the Christ.

A frequent speaker at workshops and conferences, he is the author or co-author of five books including The Welcoming Congregation: Roots and Fruits of Christian Hospitality.

Married with two adult children, he enjoys boating on the Potomac River and competing in endurance sports such as marathons, triathlons and century bike rides, one of which landed him in the hospital for 11 days.