FROM ‘SELMA’ TO ‘DETROIT’—The national news network of the Presbyterian Church (USA) invited faith-and-film critic Ed McNulty to publish a list of 10 films “that expose and explore the cultural effects of structural racism.” That denomination is encouraging congregations nationwide to preach, teach and talk about racism, this summer. That’s true of the writers who contribute to our ReadTheSpirit weekly magazine, as well. Readers have thanked us for the special focus in our recent issues on the deep roots and complex structures of racism. This week, thanks to Ed and the Presbyterian Church, we can add this crash course at the movies. Please, enjoy this column by Ed and share it with friends this week.

QUIET FIRE, this week, recalls the 2012 film Lincoln—and a close friend to the Lincoln family: Elizabeth Keckley, a heroic and very successful former slave who rose into Washington D.C.’s high society as one of the city’s most popular dress designers. This week, Quiet Fire author Duncan Newcomer is recommending the film in part because it shows a dramatic encounter between Lincoln and Mrs. Keckley about the future of race in America. Plus, Duncan gives us links to learn much more about this all-but-forgotten woman, who played an important role in our history. Please, enjoy this column and share it with friends. 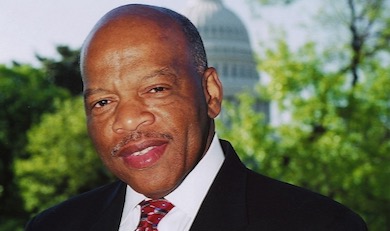 A Courageous Prophet of Hope

OUR WRITERS AND AUTHORS are mourning the passing on July 17 of civil rights pioneer and U.S. Rep. John Lewis. This has been a somber week for anyone who cares about peacemaking because of Lewis’s passing and the death, also on July 17, of C.T. Vivian who many journalists, community leaders and authors regarded as another great prophet of the civil rights movement.

Only recently, Duncan Newcomer published a powerful true story of Lewis living out his belief: “People can change.” This wasn’t merely a casually phrase for Lewis. These words were part of a dramatic reconciliation Lewis had in recent years with a man who tried to kill him in the 1960s, during a nonviolent civil rights protest. Please read this column that highlights Lewis’s courage and wisdom. Then, if you are inspired by this column, please share it with friends.

And Since We’re Focusing on Hollywood …

WATCH THE DOCUMENTARY ‘JOHN LEWIS—GET IN THE WAY‘ The documentary currently is streaming for free on Amazon Prime. Through mid-August, 2020, the film also can be streamed directly through PBS. (NOTE TO OUR READERS: The story about Lewis reconciling with the man who tried to kill him, many years ago, is part of a section of the film about the Freedom Riders—starting at about the 16-minute mark.)

Faith in a Time of Coronavirus

Religious Leaders on: Finding Faith in a Pandemic

And, Speaking of Global Dialogue— CHRISTIAN ETHICIST DAVID GUSHEE is circling the globe with two of his books that have helped to foster LGBTQ inclusion in thousands of Christian families and congregations.

His landmark book, which he describes as the most important book in his long career, is Changing Our Mind. Currently, that book is being translated into Mandarin Chinese, Swahili in Africa and Georgian in Eurasia. This week, Gushee also announced that the second edition of his earlier Kingdom Ethics, which Gushee updated to stress the need to include LGBTQ Christians, will be translated into Russian, Ukrainian and Korean.

Changing Our Mind is a shorter book, written in a compelling, personal style for general readers wrestling with Christian ethics on sexuality. Kingdom Ethics is Gushee’s larger, more-comprehensive reference work on many ethical issues, published nearly two decades ago in collaboration with the late Glen Stassen.

We Are Helping America’s Caregivers

IN PART 2 OF OUR SPECIAL FOCUS ON CAREGIVING—Susan Stitt writes about the many books our publishing house has produced to help with the challenges of caring for those we love. Please read this week’s Front Edge Publishing column about valuable books that can help you—or someone you love—cope with caregiving.

And, here’s an easy link to Part 1 on Caregiving, which also includes several share-able links to the latest data on caregiving, including a newsy chart that sums up these challenges nationwide.

CARE TO LEARN MORE ABOUT OUR MILLIONS OF VETERANS? Click on this cover image to visit the Amazon page for the Michigan State University Bias Busters’ book, “100 Questions and Answers about Veterans.” Are you a veteran who wishes family, friends and co-workers knew more about your experiences? This book is designed to help non-veterans’ most common questions. Consider ordering several copies and give them to people around you.

JULY 25 is this annual observance to encourage employers to consider veterans when hiring. In addition to the 19 million veterans living in the U.S., today, another 200,000 transition from active service to civilian life, every year. Forbes Magazine, this week, published a column headlined, Why Hiring Veterans During Covid-19 Could Give Your Company The Competitive Advantage It Needs. INC magazine published, 6 Reasons You Should Hire a Vet.

DOWNSIZED HAJJ IS AN OPPORTUNITY TO MEET OUR MUSLIM NEIGHBORS

The thousands of Muslim men and women who normally would be packing up for their once-in-a-lifetime journey to Mecca this month aren’t going anywhere, this year. Due to the pandemic, Saudi Arabia is turning this event that normally involves millions into a symbolic ritual for about 1,000 people. This is an opportunity for all of us to reach out to Muslim neighbors and co-workers and ask about family customs—as our holiday story by Stephanie Fenton suggests. If you’d like to simply skip ahead to ordering your own copy of Victor Begg’s Our Muslim Neighbors—which includes a section on the Hajj—please follow this link to Amazon right now.

Click this photo to read Ed McNulty’s 5-star review of the movie version of Hamilton.