‘The Hopes and Fears of All the Years …’

3 Writers Remind Us of 3 Turning Points—

LINCOLN SCHOLAR DUNCAN NEWCOMER reminds us that Christmas 2020 is not the first time Americans were deeply anxious about our collective future. In fact, in the midst of the darkest days of the Civil War, Lincoln himself told Congress that pushing on toward freedom was “the last best hope of earth.” Please, read Duncan’s column—and all of our columns this week—and share them with friends to strengthen and inspire their spirits in this darkest season of the year.

FOR 152 YEARS, Philips Brook’s “simple little carol” has been a Christian call to summon spiritual strength in the midst of ‘hopes and fears.’ In this Christmas letter to readers—called “Love Is a Verb”—our author Benjamin Pratt explains why this wisdom is such a central part of the Christian faith.

THE NEW YEAR 2021 is the 20th anniversary of one of the darkest hours in American history—the terrorist attacks of 9/11/2001. Early in the new year, popular journalist and author Bill Tammeus is launching his powerful memoir and reflection on the dangers of extremism: Love, Loss and Endurance. In this column, posted to Bill’s personal blog, he writes about his own search for “faith that keeps me going.”

And, stay tuned! A full cover story about this wise and inspiring book is coming to ReadTheSpirit in mid-January.

RUNS THROUGH DECEMBER 18—Many world holiday traditions are being severely impacted by the coronavirus pandemic, but Hanukkah may be an exception—after all, much of the rituals are performed at home! While most synagogues will not be open for in-person services, families can still gather around a menorah, fry latkes in the kitchen and play a festive game of dreidel. Stephanie Fenton has the story.

MONDAY, DECEMBER 21—Since ancient times, the solstices have been marked as auspicious turning points in the calendar. For our Northern readers, this is the winter solstice! Often termed Yuletide or Yulefest, the days surrounding winter solstice have long been marked with cold-weather festivals and warm feasts. Stephanie Fenton has the story—including links to great recipes and other festive ideas.

More of Us Are Reading Right Now 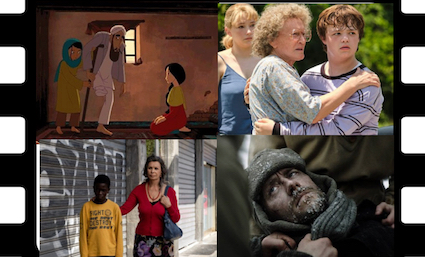 Click on this image to learn more about the December 2020 issue of Visual Parables Journal.