An Invitation to Connect and Help Others

COVER STORY—In 2021, we are launching books that not only inspire readers—but also invite them quite literally to become part of new communities of hope and kindness. That’s the theme of Mindy Coroporon’s upcoming memoir, Healing a Shattered Soul. Her book now is available for pre-order and will ship from Amazon (and other online retailers) in a couple of weeks. However, right now—this week!—Mindy is inviting all of us, across the nation, to join in some inspiring virtual events. So, please read our Cover Story this week—which includes a short video from Mindy and links to register for the free programs she is offering. And, please, share this Cover Story with friends. You’ll have a lot more fun with Mindy if you bring along some folks you know and love.

THE NEWS THIS WEEK IN ‘We Are Caregivers’ circles the globe. First, we are featuring Zaman International-founder Najah Bazzy with tips for a healthy Ramadan. Then, we share news from the Vatican, which includes an invitation to download a new teaching document about caregiving during the pandemic. Finally, we have author Bill Tammeus’s invitation to sign up for a free online workshop he’s leading about ‘Writing Your Spiritual Will.’ Lots to share with friends, this week, in We Are Caregivers!

AND SPEAKING OF RAMADAN …

… LET’S LEARN ABOUT OUR MUSLIM NEIGHBORS

OUR BOOKS ARE DOORWAYS—As the fasting month of Ramadan approaches, the world’s nearly 2 billion Muslims are preparing to focus, once again, on the Quran. This worldwide faith truly is focused on reading, scholarship and sharing stories. Please, read this Front Edge Publishing column that introduces some of our books that are open doorways, inviting us to meet our Muslim neighbors.

THEN, STEPHANIE FENTON has the story about the world’s Muslim communities approaching their second fasting month of Ramadan under pandemic restrictions. Among the reassuring news reports: A British study indicates that last year’s Ramadan, which unfolded at the start of the pandemic, did not lead to an increase in COVID. Also, Muslim authorities are reassuring faithful families that continuing to receive vaccinations—even if an appointment falls during Ramadan—will not violate the strict fasting rules. This is a great column to share with friends and co-workers.

AND COMING NEXT WEEK …

OUR BAHA’I AND HINDU FRIENDS have major festivals both starting in the second half of April. The most holy Baha’i festival worldwide is the 12-day period known as Ridvan. Named “Ridvan” for “paradise,” this sacred festival commemorates Baha’u’llah’s time in the Najibiyyih Garden—after he was exiled by the Ottoman Empire—and the first announcement of his prophethood. Then, starting a few days after that in Hindu communities: The story of Lord Rama has been read, recited, and reviewed by Hindus worldwide, during a period known as Ramayana Week—all leading up to the climactic festival of Rama Navami.
.

THAT’s THE KEY to the nationwide success of marketing consultant Barbara Loren-Snyder, whose remarkable career sprang from a lonely childhood in a struggling immigrant family. As columnist Suzy Farbman writes this week, Barbara was determined from a very young age to carve out a unique career. And she did! Among her many successes? Barbara is the visionary who spotted Martha Stewart as the next big thing—and made it happen. In Part 1 of this story, Suzy Farbman reaches back to Barbara’s roots, including one of her first big successes in the 1960s. Anyone remember the Wendy Ward charm schools? Ken Whitt:
Inviting us to ‘A Global Creation Care Conversation’

MARK EARTH DAY on April 22, this year, by Zooming with a worldwide circle of Christian climate activists coordinated by our author Ken Whitt. “This series of climate-change conversations began within our American Baptist Churches, but the conversations now are spreading around the world,” Ken said this week in extending this free invitation. “We welcome anyone who is interested in these issues to join us on April 22.” Here are details about this free program—and how to request a Zoom link to attend.

“Finding ethical and spiritual values in this year’s Oscar-nominated films“—that’s the title of a special column faith-and-film writer Ed McNulty wrote for the Presbyterian Church (USA) website. Nomadland is just one of 10 Oscar contenders Ed covers in this column, which makes connections between these films and various passages from the Bible. Are you a preacher, teacher, small group leader or writer among our readers? If you love movies, then you’re likely to find some great ideas in Ed’s helpful overview of these 10. Just click on the Nomadland photo above to visit Ed’s page on the PC-USA website. 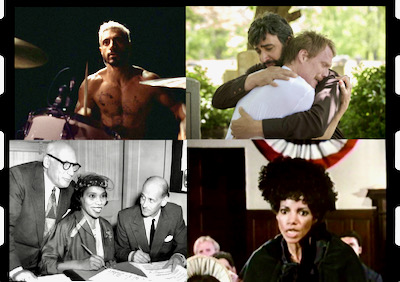 Click this image to learn more about the April 2021 issue of Visual Parables Journal.