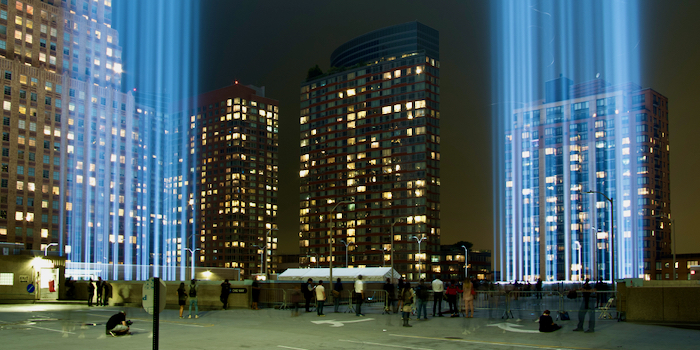 Why 9/11 Matters in Our Troubled World

Countering the Dangers of ‘Uncompromising Dogmatism’

THIS YEAR, the 19th anniversary of 9/11, the awe-inspiring Tribute in Light was almost extinguished to protect the health of the 40 professionals who work for a week to make it happen—until the state of New York announced in mid-August that special health-care resources would surround the event and ensure it could keep shining safely. That’s a potent sign of how much we all need to remember this milestone in world history—especially in this season when extremism seems to be running rampant again in many corners of the United States.

This week, we are honored to have this deeply personal Cover Story from award-winning journalist and author Bill Tammeus, based in Kansas City. Please read it and share it with others. We are intentionally publishing this column a week before the 9/11 anniversary so our readers can feel free to pass along Bill’s story to spark conversations well before the anniversary. (Note: We always publish under Creative Commons licensing, which means you are free to share and repost this important voice and other stories we share each week.)

OUR SHARED VALUES CAN REUNITE US. That’s what author, pastor, teacher and leadership coach Larry Buxton says on the front page of his new website: “Larry Buxton … can help you clarify your deep values and foundational principles. As you hold to them in challenging situations, you can grow to act
with courage, character and confidence.” He does that through his professional coaching—and he is sharing this wisdom with all of us through his new book: 30 Days with King David on Leadership.

Become Part of this New Call to Unity

And Speaking of Our Authors …

MSU SCHOOL OF JOURNALISM’S JOE GRIMM is frequently in the midst of national conversations on cultural diversity, including race, religion, ethnicity and generational groups. Currently, Grimm is quoted as an expert in an Ozy.com column about Gen Xers’ anxieties about our nation’s problems. You can follow Joe’s newsy MSU Bias Busters columns at his MSU School of Journalism website. You can learn more about the wide-ranging book series these journalists have produced at their Amazon author page.

Martin Davis and the Prophetic Voices of Athletes

‘OUR STARS ARE SPEAKING TO US’—and we’re long overdue in heeding these prophetic voices, author and columnist Martin Davis writes this week in a powerful overview of the prophetic actions unfolding in professional sports. In fact, these voices have been raised for many years. Martin asks: Will we finally listen?

ARTIST MICHELLE SIDER‘s multi-faceted career includes helping to create the unique and inspiring book Never Long Enough, designed to help families reflect on the lives and legacies of their loved ones. Her latest project—which she describes as “painting with glass”—is profiled in the current issue of The Jewish News in a feature story by Barbara Lewis, who also is one of our authors (as a key collaborator in the book Friendship and Faith). AND … THERE’S MORE! In The Oakland Press, Stephanie Sokol reports on Michelle’s work with nature-inspired images.

NAJAH BAZZY—like Joe and Michelle and Barbara, above—also is deeply engaged in the national effort to highlight the needs of millions of at-risk families, especially families with children that are headed by single parents. Through her Zaman International nonprofit, as well as teaching and public speaking, Najah not only has raised awareness, but also has provided direct help (food, furniture, training and much more) to families. We just learned that Michigan Women Forward has named six women to the HERstory Women’s Hall of Fame. The website currently shows the 2019 winners. These new winners will be honored at a ceremony on October 15. Najah also is a contributing writer in Friendship and Faith, has written a guide to The Beauty of Ramadan, and currently is working her memoir to be published in 2021.

IN QUIET FIRE, this week, Duncan Newcomer takes us deep into the woods—both in Abraham Lincoln’s boyhood Indiana and in poet Rabindranath Tagore’s India.

Thanks. And we’ve already got this on RTS to highlight anew with your piece:
https://readthespirit.com/interfaith-peacemakers/rabindranath-tagore/

TRIBUTE TO CHADWICK BOSEMAN—Click on this photo from ‘Black Panther’ to read Ed McNulty’s tribute to the late actor—including links to reviews of many of his best films.