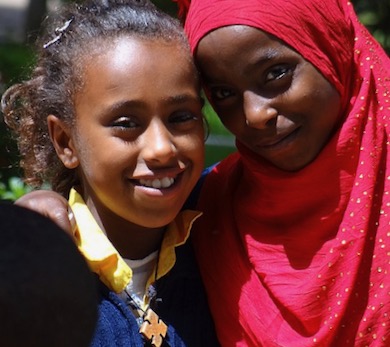 Click on this photo of girls of two different faiths to start reading Larbi’s report on diversity and peacemaking.

How We Can Become Friends …

FRIENDSHIP IS A PATHWAY TO PEACE—This week, our two featured Cover Stories are both new Global Plus columns by friends of our online magazine. The first is by Larbi Megari, an internationally known Muslim journalist based in Algeria who also is co-managing director of the International Association of Religion Journalists. Larbi is always looking for ways encourage peace through reporting on our world’s diverse religious communities. In fact, his new Global Plus column shows why making friends across religious lines is a powerful step in peacemaking.

In his new report, Larbi writes, “Getting to know each other, and listening to what people have to say about their faith in a spirit of humility and mutual respect, can be keys to living together in peace and harmony. And that is not just faith talking. Researchers found bringing together people of different religions was not only related to greater acceptance among the faiths involved, but was associated with warmer feelings toward other religions.”

… and How We Can Avoid  Stereotypes 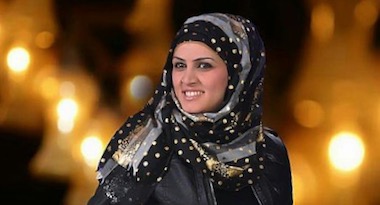 Click on this image to start reading the second Global Plus column we recommend this week—about trends in modest fashion.

POPULARITY OF ‘MODEST’ FASHION—If you think that the Muslim “hijab” or “head scarf” is a dangerous sign of oppression, you will need to rethink that stereotype after reading this second Global Plus column by Reina Lewis, one of the world’s leading scholars and writers on faith and fashion. In this new column, Reina writes, “Slowly, the stereotype of the hijab as a potent political symbol of the outsider status of Muslims is eroding. Today, stylish women of many faiths that encourage modesty have embraced coverings or other relevant adaptions of dress and behavior as signs of fashion and faith. In so doing, this largely women-led movement is breaking down legal and social barriers to religious freedom.”

Now, that’s a fresh perspective in reporting on Muslim culture, isn’t it? And, these stories are especially timely with the annual Hajj, and associated festivals, coming soon.

THERE’S MORE—All Global Plus columns include a list of recommended reading. So, both Larbi’s and Reina’s reports are valuable as a way to spark further discussion and learning on these important topics. 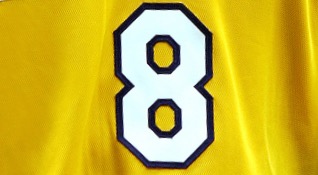 GOD SIGNS—Columnist Suzy Farbman shares true stories of unexpected connections in our world through the inspiring men and women she meets in her travels. This week, Suzy writes about her lucky number and the surprising ways that number seems to have spiraled around a particular modern artist she loves: Julian Lethbridge. Do you have a lucky number? Perhaps after reading Suzy’s column this week, you might think of a story you want to share with friends about a digit that just seems to keep popping up in your life.

DREAMING OF BOOKS—Last week, we posted two stories about the  future of publishing—and the creative ideas in those columns sparked a lot of reader feedback. Thank you for the thoughts and questions you’ve sent our way. So, we are keeping the links to these columns on our front page for a second week: The first story tells about three visionary issues that 57 publishers discussed at length at a conference held in Nashville. Then, in a second story, we zeroed in on six more news items about publishing trends. That story is over at our Front Edge website.

HAJJ—More than a billion Muslims around the world look to the Hajj, each year, as about 2 million pilgrims travel to Mecca for to fulfill one of the five pillars of Islam. Stephanie Fenton has the story for us, including an overview of the history and customs. Most Americans have a friend, neighbor or colleague in the community who is Muslim. It’s a great time to learn about the culture of this faith that stems, along with Judaism and Christianity, from the patriarch Abraham.

CELEBRATING MARY—On August 15, Christianity comes together from East and West on the mid-August holiday honoring Mary, Jesus’s mother. However, there are two different names sets of traditions: The occasion is called the Assumption of the Blessed Virgin Mary in Western tradition—and the Dormition of the Theotokos in Eastern churches. 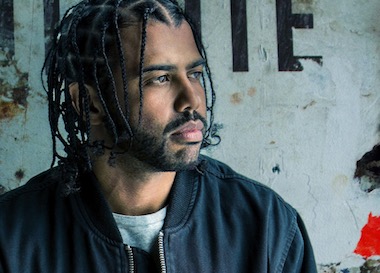