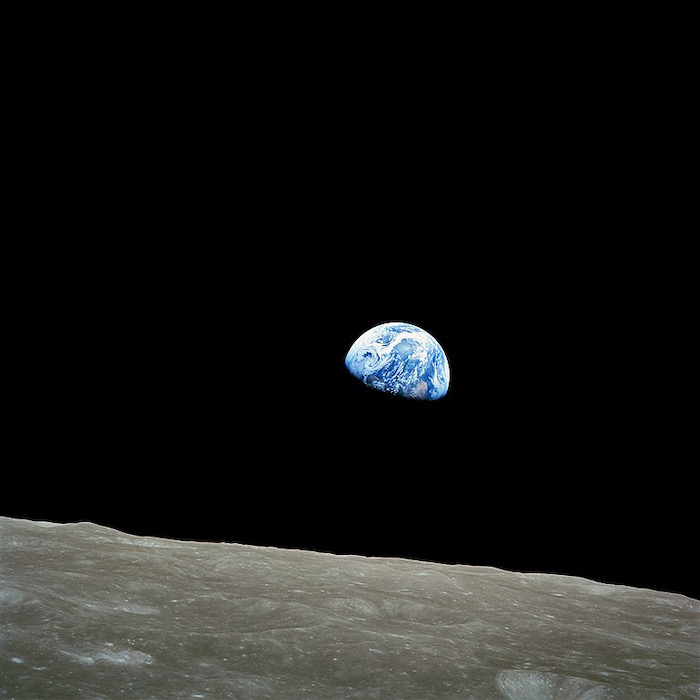 Earthrise is a photograph of Earth and some of the Moon’s surface that was taken from lunar orbit by astronaut William Anders on December 24, 1968, during the Apollo 8 mission.

FRIDAY, APRIL 22, 2022—If we go back in time, what brought us to celebrate Earth on April 22, 1970? What brought the entire world to honor the Earth thereafter yearly on each April 22nd?

One milestone was “Earthrise,” a NASA photograph that astonished the world with its profound beauty. It is now known as the single, most important photo that propelled the environmental movement and our celebration of Earth Day.

Even before that, in 1962, Rachel Carson published her book called Silent Spring. It was a New York Times bestseller that told the tale of countless birds eating the pesticide DDT and dying in such great numbers that soon there would be a “silent spring” on the Earth. It was especially disturbing to environmentalists. Today people trace the birth of the modern environmental movement to that book.

The Silent Spring story underlined in profound terms the cause and effect of things we are doing to our environment. It highlighted the pesticide DDT that stopped insects from eating our food. But the real question was, “What was the effect of this poison on us humans and the planet?”

In the 1960s, many events were brought to light in the news about factories pumping pollutants into lakes, rivers and streams, but few people thought globally about it. The idea was, “I’ll clean up my steam and everything will be fine. Let’s fix the lake in my backyard or in the nearby city. That will take care of the problem.” So there was this sense that there was pollution in the air and water, but few people thought globally.

At the time this concept was not widely embraced and the new message was that we are not isolated on the planet. As a result, a congressional committee was set up to talk about the warning in Rachel Carson’s book, but no legislation would come out of it.

At the same time, the 60s were a particularly turbulent decade in American history—perhaps the most turbulent since the Civil War. We as a nation were preoccupied with the War in Vietnam, the Cold War with the Soviet Union and the Civil Rights Movement. Americans were focused on other issues.

But, then in 1968, came NASA’s Apollo 8.  It was the first space mission where a crew left the Earth and you know where they went? They went to the moon and would soon perform several orbits. For the first time, they would leave Earth for a new destination.

Apollo 8 received its most deserving mark in history on Christmas Eve, December 24, 1968. It would turn out to be the eve of “new birth.” On that flight, Apollo 8 entered lunar orbit, and that evening mission commander, Frank Borman, command module pilot Jim Lovell, and lunar pilot William Anders held a live broadcast in which they showed pictures of Earth and the moon as seen from their spacecraft.

But, something very significant happened on that orbital flight. Astronaut William Anders lifted their Hasselblad camera and took a picture. Until that moment, we had seen the Earth in books with drawn-in boundaries and color-coded landmasses.

But at that instant, there was Earth rising above the lunar landscape. Anders snapped that photo and for the first time—this was Earth from space—as only the universe could reveal it.

With this picture, we saw Earth alone in the darkness of space—silent, with its blue oceans, clouds, and enormous landmasses. But we also saw a fragile planet in the blackness of that forbidding space where there was no one coming from the outside to help us or to save us from ourselves.

This cosmic perspective descended on us all from the portal of space straight to our hearts. We as Americans went to the moon but with NASA’s Apollo 8, we discovered Earth.

This image was a colossal upgrade in our consciousness about our planet and our own part in its survival. The Earth was shown without borders—that was a powerful new mindset. It was a pivotal moment.

In July 1969 we would walk on the moon, but what happened after that? One year later in 1970, the Environmental Protection Agency was signed into law.

Then, also in 1970, NOAA—the National Oceanographic and Atmospheric Administration was created. Before that, we never combined the ocean and air in the same phrase. NOAA’s job was to monitor our climate and weather in the service of our safety, health, and commerce, especially how it relates to the seas which help to bring goods and services across the oceans.

So what else was founded?

The comprehensive Clean Air Act was passed in 1970 and the Clean Water Act in 1972. DDT would be banned in 1973. Leaded gas would be banned as of January 1, 1996. All of this happened during the years of us going to the moon.

In 1971, Doctors Without Borders was founded. It has nothing to do with the environment, but why did they call themselves “without borders”? Where did that mindset come from?

In addition in 1971, there was a public service announcement of a Native American with a tear coming out of his eye, now known as the Crying Indian PSA. That commercial showed an Indian standing alongside a freeway where people were driving by throwing trash out the windows which landed at his feet. It became one of the most recognized public service announcements about pollution.

So what values drew us in that era to our space program and our new look at our mother Earth? Was it Tang? Was it Velcro? Or is it a total consciousness that maybe Earth is one eco-system in which we are all participants. We began to see things globally not locally.

Astronaut Jim Lovell of that Apollo 8 mission said of space, “The vast loneliness is awe-inspiring, and it makes you realize just what you have back there on Earth.”

Environmentalist David Suzuki said, “The human brain now holds the key to our future. We have to recall the image of the planet from outer space; a single entity in which air, water, and continents are interconnected. That is our home.”

What can be done to help our magnificent but fragile planet?

Check out: Hasselblad in Space

An Inconvenient Truth: The Crisis of Global Warming by Al Gore

The Sacred Balance: Rediscovering Our Place in Nature by David Suzuki

The World Is Blue: How Our Fate and the Ocean’s Are One by Sylvia Earle

The Sixth Extinction: An Unnatural History by Elizabeth Kolbert

The End of Nature by Bill McKibben

Born and raised in the Great Lakes State of Michigan, Carol Trembath has been an educator, librarian and media specialist for 30 years. She is the author of a number of books. If you enjoyed this story, you’ll want to read some of Carol’s earlier columns:

Carol Trembath on a Native Perspective on the Spiritual Wonders of Water.

To see all of her books, visit Carol’s Amazon author page.

Carol earned a Masters Degree in Library and Information Science from Wayne State University and a second Masters in Educational Technology from Michigan State University. Carol has been an educator in the Plymouth-Canton School District, Allen Park Public Schools, and the Walled Lake Consolidated Schools. Carol is a member of the Michigan Reading Association, American Library Association, and the Society of Children’s Book Writers and Illustrators.

Care to Read Even More? 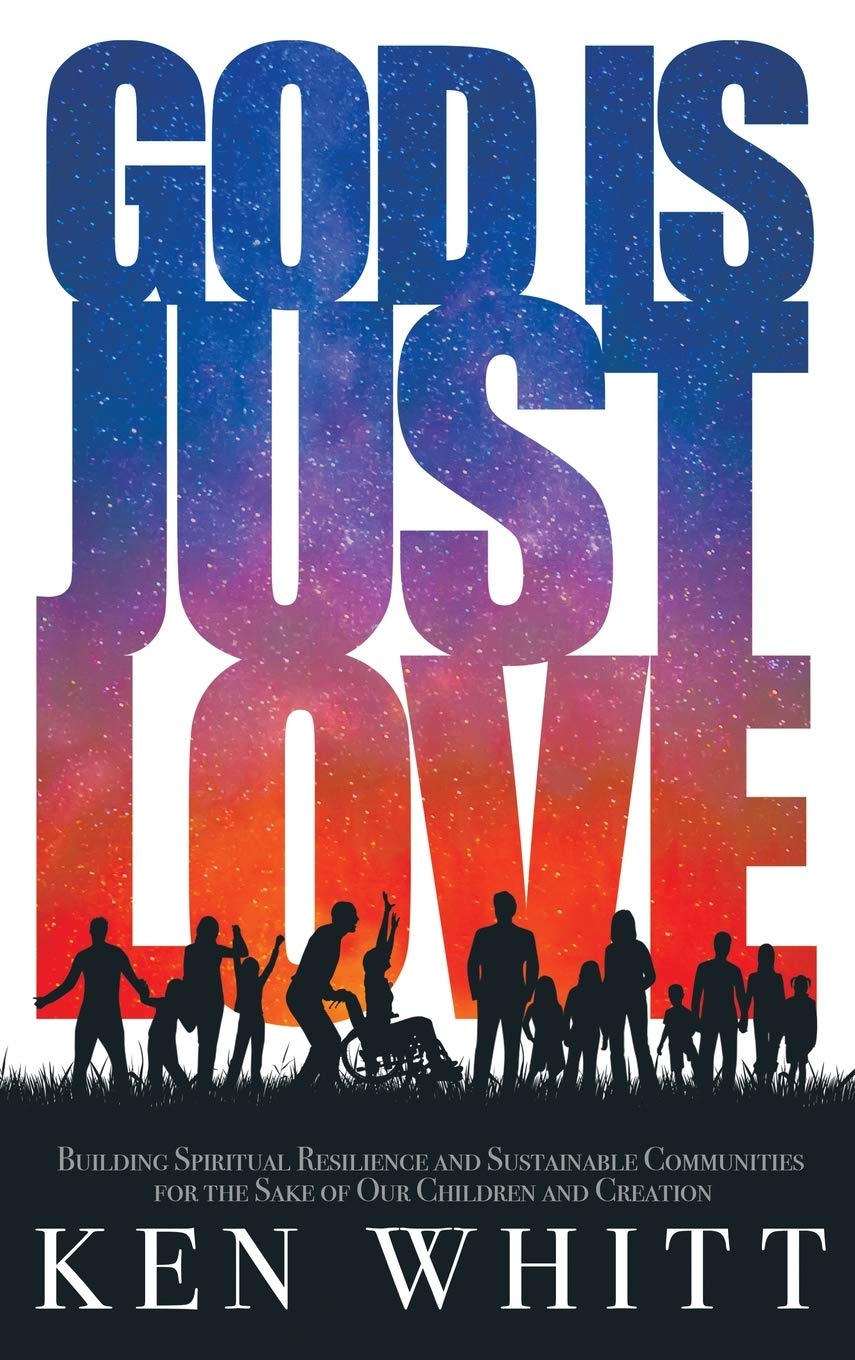 Last year, our publishing house launched a hopeful new book by Ken Whitt, packed with ideas for families who care about these issues Carol Trembath has just described in her Earth Day column. It’s called: God Is Just Love: Building Spiritual Resilience and Sustainable Communities for the Sake of Our Children and Creation.

In Ken’s book you’ll find recommendations for further reading that are very similar to Carol’s list.

How can people of faith foster love and resilience in our children while building sustainable, diverse communities? That’s the big question Ken Whitt answers in light of the many threats looming in our world. Through wisdom he has gleaned from scientists, scholars and lots of real families, Ken shows how God’s love is a hopeful compass in our lives. He encourages enjoying stories, songs and explorations of the natural world with children, and closes with “100 Things Families Can Do To Find Hope and Be Love.”