SATURDAY, DECEMBER 24: On this night—and for a total of 8 nights—it’s Hanukkah. Jewish families light candles, fry up latkes and many children try their luck at a game played with a four-sided top known as a dreidel. Though not as religiously significant as other Jewish holidays, such as Passover and Yom Kippur, Hanukkah is widely celebrated, and is easily recognized even by non-Jews.

Interested in crafting your own DIY menorah? Find tips and ideas for a fun homemade menorah here.

Several inspiring themes are part of this festival, including the power of light itself at this ever-darker time of year in the Northern Hemisphere. Another major theme of Hanukkah is religious freedom. As the traditional story is retold in most Jewish families, a wicked ruler more than 2,000 years ago was determined to force Jews to leave their ancient traditions behind in favor of practices drawn from Greek culture. Instead, a rebel force known as the Maccabees heroically defeated these rulers and restored the traditional rituals in the Jerusalem temple.

Did you know? The Maccabeats, an all-male a cappella group based out of Yeshiva University, is popularly known for its Hanukkah song, “Candlelight” (access the music video that’s been seen by more than 12 million viewers via YouTube).

Most Jewish families also retell a story about the small amount of sacred oil that was left in the rededicated temple—a tiny amount of oil that nevertheless managed to keep the temple’s light going for eight days. That’s why Hanukkah food traditions involve oil, to this day—especially potato pancakes better known as latkes. Hanukkah is faithfully observed by most Jews with the lighting of candles in a nine-branched menorah with one candle for each of the eight nights and one extra candle (the shamash), which is often placed separately from the others. The shamash must be used for “practical” purposes, so that the remaining candles may be used solely for publicizing the miracle of the oil. Some families substitute small oil lamps for candles. 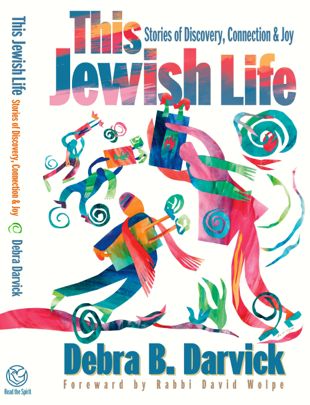 CLICK this cover to find out more about Debra Darvick’s book.

In her inspiring book, This Jewish Life, Debra Darvick writes dozens of true stories about Jewish men and women experiencing the seasons in Judaism. In one section of her book, she explains the basics about Hanukkah’s commemoration of “the Jewish victory over Syrian emperor Antiochus and his army. In 167 BC, Antiochus decreed the practice of Judaism to be an offense punishable by death. The Temple was desecrated, and the Syrians went so far as to sacrifice pigs in the Temple. A Jew named Mattathias and his five sons began a revolt not only against Antiochus, but against the Jews who were quite willing to take on the ways of the majority population and jettison Jewish practice. Three years later, the Maccabees, as the Jewish fighters were known, and their followers, were victorious and the Temple was once again in Jewish hands.”

She explains that “according to Jewish tradition, when the Temple was finally cleansed for re-dedication, there was but a single day’s supply of ritually pure oil for the ner tamid, the everlasting light that hangs in every synagogue as a symbol of God’s ever-presence. Miraculously, the oil lasted for eight days, the time needed to press and ritually purify additional oil for the ner tamid.”

Debra warns readers that this “is not the time of year to start a diet, for the two foods most associated with the holiday are latkes, potato pancakes, and sufganiot, Israeli for jelly donuts, both of which are fried in veritable lakes of oil.” Oh, and if that’s not a high enough calorie count—there’s also the “gelt, chocolate coins wrapped in gold foil.”