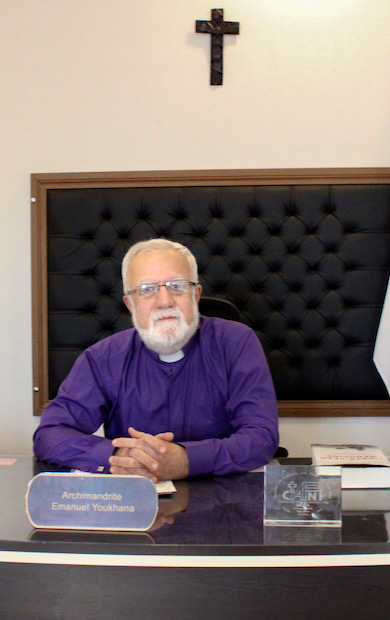 SATURDAY, AUGUST 7—Meet Archimandrite Emanuel Youkhana, archimandrite and priest of the Assyrian Church of the East in Iraq. Many Western Christians may be surprised to hear about the Christian presence in Iraq, but Iraqi Christians have had a continual presence since the first century after Jesus’ life and death.

Archimandrite Emanuel does not have formal seminary training because under Saddam Hussein’s rule from 1979-2003, there was no seminary education in Iraq. Instead, Emanuel studied electrical engineering at the University of Baghdad. After informal training through the Assyrian Church, he was ordained in 1987. He is married and has four adult children, most of whom went on to study politics and now live in Iraq and Germany.

The Assyrian church is an Eastern-tradition of the church, claiming theological and ecclesiastical continuity back to the first century after Jesus’ life. According to the Seyfo Center, “Assyrian” refers to “indigenous Christian peoples living in” Kurdistan, northern Mesopotamia, Northern Iran, South Anatolia and Syria“who speak (or once spoke) an Aramaic Semitic language.”

Assyrians have endured so many persecutions that they dedicate three days a year specifically to the commemoration of martyrs. April 24 commemorates the Turkish genocide of Assyrians during World War I, concurrently with the Armenian genocide, known as the Seyfo (Aramaic word for “sword”). Between 1914 and 1920, and especially between June and October 1915, the Ottoman Empire murdered more than 250,000 of the 600,000 Assyrians living in present-day southeastern Turky and Western Iran. Nearly all of the rest were forced to migrate to Syria and northern Iraq.

Second, The first Friday after Easter commemorates the faithful who were martyred specifically for their Christian faith, known as the Confessors. Friday of Confessors is known as a joyful feast 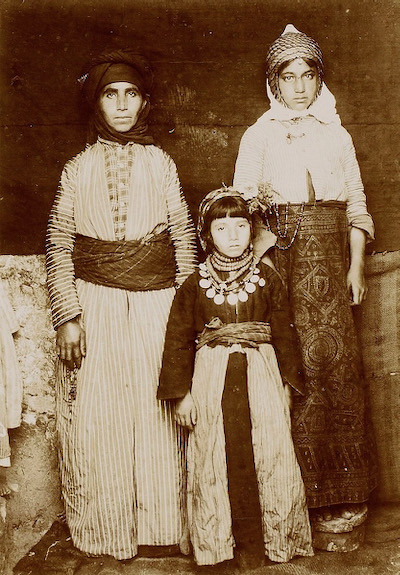 An Assyrian Christian family photographed in the era of the massacres.

While extra attention is paid to martyrs on August 7 and April 24, most of the church’s liturgies commemorate martyrs to some degree. The Church holds daily evening and morning prayers, each of which have hymns dedicated to martyrs. The Church remembers martyrs everyday except for Sundays, when they instead commemorate resurrection, during Lent, when a separate liturgy is observed.

Many martyrs are remembered personally, and continue to be a source of spiritual strength for the Church today: “Peace to thee, Mar Pithiun the martyr. Spiritual treasurer. Supply wealth to the needy. Who take refuge in thy prayers.” “Let us take refuge in St. George. That by the strength of his prayers. Our Lord may make straight our ways. And lighten the weight of our limbs” (PS Cxv 13, page 23-24, First Tuesday evening).

Martyrs are often compared to jewels, and the liturgy contains many metaphors describing the martyrs’ beauty:

“The martyrs are like pearls. For their images are fixed in the King’s crown” (Monday evening, 13).

“Fairer to look on than the children of men. The rose in the gardens is beautiful to behold. But more beautiful were the martyrs when they were killed” (Monday evening, page 14).

But persecution of Christians in Iraq does not remain in history past, rather it continues today. When asked to describe Iraqi Christians’ persecution today, Archimandrite Emanuel told this story:

Persecution here is more than personal; it’s also communal. In 2014, the city of Qaraqosh in Nineveh Plain had more than 50,000 Christians, with a large building and comfortable staff. They had schools, multiple clergy, even libraries and a seminary. Then on August 6—the anniversary of the 1933 massacre— everything was destroyed at the hands of ISIL, known in Arabic as Daesh. Churches were targeted specifically because they are Christian. Only recently have the small number of Christians remaining begun to rebuild the city.

In 1993, Archimandrite Emanuel was part of a team founding CAPNI (Christian Aid Program in Nohadra Iraq), an NGO in Dohuk, Iraq (Nohadra is the historical Assyrian name of the Duhok region. CAPNI’s goal is to “materialize hope” for Christians in Iraq. Abuna Emanuel explains, “Sermons mean little when a father asks for his livelihood, a mother for her medicine, children for their schools. Offering services and bringing people together materializes hope.” Learn more about CAPNI’s many services here.

Archimandrite Emanuel hopes that Western Christians would learn from the Assyrian church what it is like to live under persecution. Something unique about the Assyrian church, A. Emanuel explains, is that despite having a continual Christian presence since the first century after Jesus’ life, they have never lived under Christian rulers.

When asked how Western Christians can support the Assyrian Church, Archimandrite Emanuel explained that “God chose us to be his witnesses in these lands, and we accept this mission. We will carry his cross. We don’t ask for light burdens, we ask for strong shoulders. Our shoulders can be strengthened through your prayers as well. So keep us in prayer.”

When asked how he finds hope despite such discouraging circumstances, Abuna Emanuel explained he looks to the next generation: “When you visit a family, and the kids are smiling. We have five kids’ centers at CAPNI. And we have nice flowers in the gardens. Then, I feel and see hope in the children’s smiles and hugs and playfulness.”

The following prayer is another way Western Christians can express solidarity with these Christians: