DECLARATION OF THE BAB, ‘THE GATE’ 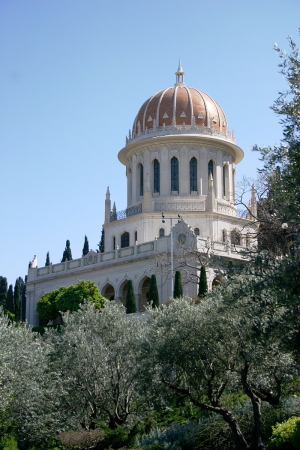 Shrine of the Bab on Mount Carmel in Haifa, Israel. Photo courtesy of Wikimedia Commons

Baha’i communities across the globe commemorate the anniversary of the Declaration of the Bab, made in 1844. Though the roots of this story began decades earlier—in 1783, precisely—it was not until this pivotal night that the Bab correctly answered a series of questions that revealed he was the “Promised One.”

According to Baha’i tradition: The search for the Promised One, or “the Gate,” began years before the Bab’s birth, with a man named Shaykh Ahmad-i-ahsa’i. This man began traveling through Persia with the announcement that a great day was coming: a day that would see a Promised One. Later, a follower of his teachings—Mulla Husayn—would find the Bab. (For details, visit Bahai.org.)

Though the identity of the Promised One remained secret, it was through a series of descriptions, questions answered and seemingly impossible tasks accomplished that a Persian merchant named Siyyid Ali Muhammad Shirazi convinced Mulla Husayn that he was the bearer of divine knowledge. This evening is now celebrated by Baha’is as the Declaration of the Bab. (For a meditative prayer set to music, visit New York Bahai.)

Following the 1844 proclamations, which were later made public, Siyyid Ali Muhammad Shirazi took the name “the Bab” (Arabic for “gate”) and began writing. The Bab penned his messianic claims, teachings and new religious law. In a few short years, the Bab had acquired thousands of followers. Starkly opposed by other clergy and the government, thousands of Babis were persecuted and killed.

In 1850, at the age of 30, the Bab was executed by a firing squad—though not before finding Baha’u’llah, the founder of the Baha’i faith and the messenger of God whom the Bab had spoken of.

ASCENSION OF BAHA’U’LLAH, THE ‘PROMISED ONE’ 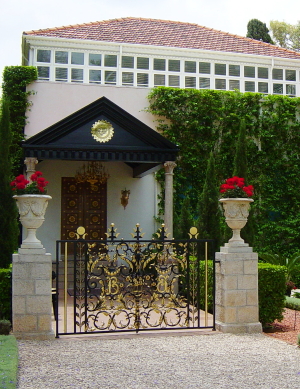 An entrance to the Shrine of Baha’u’llah. Photo courtesy of Wikimedia Commons

A prisoner of decades, a man who penned almost 100 volumes and changed the interfaith world is commemorated today, on the Baha’i observance of the Ascension of Baha’u’llah.

The founder of the Baha’i faith, Baha’u’llah lived in Persia but was buried in Bahji, in the shrine where his body still lies, in 1892 CE. For this solemn holy day, many Baha’is attend a service or study the writings of Baha’u’llah.

Did you know? Baha’i gardens are designed to symbolize the order of the world in the future. Baha’u’llah wrote often of the unity necessary for peace in the future.

The Bab taught that Baha’u’llah was the Promised One, and that he had been but the Gate for Baha’u’llah.

LETTERS, TABLETS AND PROPHESIES: Through his years of exile and imprisonment, Baha’u’llah wrote large volumes, personal tablets and even letters for kings and rulers of the time, urging them to resist greed and anger in favor of peace. Many of the leaders—from a Russian czar to Napoleon III of France—disregarded Baha’u’llah’s warnings. Baha’u’llah predicted that if these leaders did not resolve their differences and halt the insatiable desire for land, materials and power, they would fall—and, one by one, the leaders realized the fate that Baha’u’llah had warned against.

Today, approximately 6 million Baha’is in 192 countries and territories across the globe observe this holy day. For the Ascension of Baha’u’llah, the faithful reflect on the messages of unity—and Baha’u’llah’s suggestion that all of the world’s major religions derive from the same source, in unity, as part of the same family.