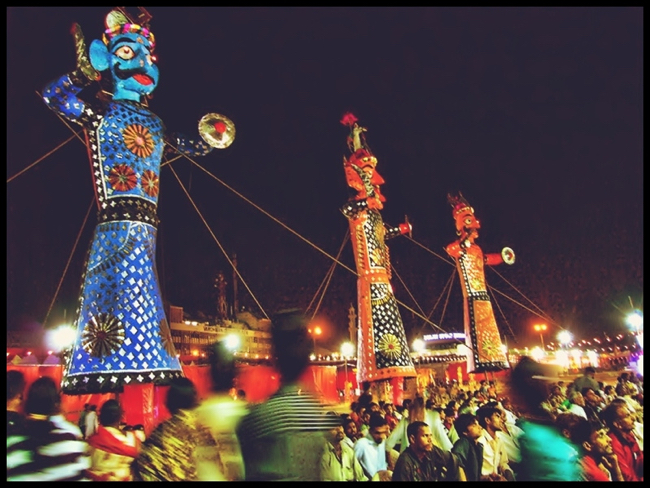 One hundred-foot Ravana effigies, on the 10th night of Dussehra in New Delhi. Photo by Kaniths, courtesy of Flickr

FRIDAY, OCTOBER 19: The festival of Navaratri culminates in the most celebrated holiday of all nine nights: Dasara (spellings vary). From the Sanskrit words for “remover of bad fate,” today’s Dussehra brings towering effigies to the streets of India, along with a host of ancient rituals and marked traditions. Many Hindus recognize the victory of Lord Rama over Ravana, a demon, during an epic battle over Rama’s wife, Sita. It’s believed that Ravana had 10 heads, and thus, 10 unfavorable qualities are rid from households with elaborate Yanga performances today; the unfavorable qualities include lust, anger, delusion, greed and jealousy.

Did you know? Feminism shines in the victory of Goddess Durga over demons, thereby continuing the female-centered rituals of Navaratri. In rural areas of India and Nepal, it’s recognized that harvest season begins today; the Mother Goddess is worshipped, and farmers ask for fertility in their soil. 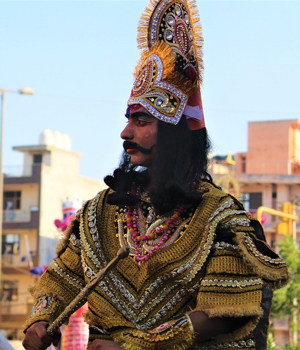 In many parts of India, towering effigies of Ravana and his brothers are filled with firecrackers and exploded. Citizens cheer at the blast and dance, sing and feast. The burning effigies are also seen as a cleansing ritual, as they encourage onlookers to burn inner evil and follow the path of righteousness. In northern India, a chariot holding devotees costumed as Lord Rama and Sita rolls down the streets; in southern India, homes are decorated with lamps and flowers.

Did you know? Dussehra is also known as Vijayadashami, the celebration of yet another victory involving goodness over evil: Goddess Durga’s defeat of the demon Mahisasura. According to this legend, Mother Goddess Shakti incarnated in the form of Goddess Durga.

Given the day’s auspiciousness, many Hindu (and non-Hindu) children begin their formal education today. Some devotees purchase new work tools—whether books, computers or farming equipment—and still others pay respect to elders and request their blessings. Families and friends gather for parties and feasting.

Across India, gratitude is expressed for the end of a scorching summer season and the approach of cooler days.