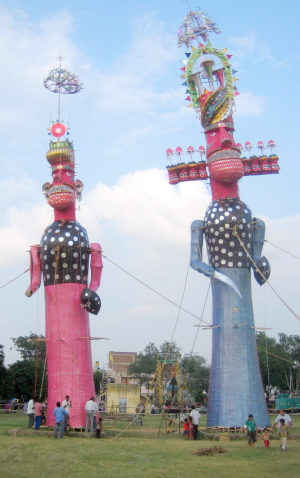 WEDNESDAY, OCTOBER 5: The Hindu festival of Navaratri (a nine-night celebration honoring the goddess Durga, along with other goddesses and deities) culminates today, in the most celebrated holiday of all nine nights: Dasara.

Did you know? While some Hindu texts recognize two to four Navaratris each year, the most celebrated is this, Sharada Navaratri, which falls annually near the autumn equinox.

From the Sanskrit words for “remover of bad fate,” today’s Dussehra (spellings vary) brings towering effigies to the streets of India, along with a host of ancient rituals and marked traditions. Many Hindus recognize the victory of Lord Rama over Ravana, a demon, during an epic battle over Rama’s wife, Sita. It’s believed that Ravana had 10 heads, and thus, 10 unfavorable qualities are rid from households with elaborate Yanga performances today; the unfavorable qualities include lust, anger, delusion, greed and jealousy.

In many parts of India, towering effigies of Ravana and his brothers are filled with firecrackers and exploded. Citizens cheer at the blast and dance, sing and feast. The burning effigies are also seen as a cleansing ritual, as they encourage onlookers to burn inner evil and follow the path of righteousness. In northern India, a chariot holding devotees costumed as Lord Rama and Sita rolls down the streets; in southern India, homes are decorated with lamps and flowers.

IN THE NEWS: According to reports from Sangri Today, Dussehra is now being celebrated in more than 100 cities across the U.S. In addition, several states and cities have declared October Hindu Heritage Month, as it is the birth month of Mahatma Gandhi and the Gregorian month during which important Hindu holidays, such Navratri, Dussehra, Durga Puja and Diwali, often take place. (For more information, as well as instructions on how to submit a Hindu American Awareness and Appreciation Month (HAAAM) resolution to local government, check out the Hindu American Foundation.)

In many regions, Dussehra is also known as Vijayadashami, the celebration of yet another victory involving goodness over evil: Goddess Durga’s defeat of the demon Mahishasura. According to this legend, Mother Goddess Shakti incarnated in the form of Goddess Durga.

Across India, gratitude is expressed for the end of a scorching summer season and the approach of cooler days. The festival also starts the preparations for Diwali, the festival of lights, which is observed 20 days after Vijayadashami.