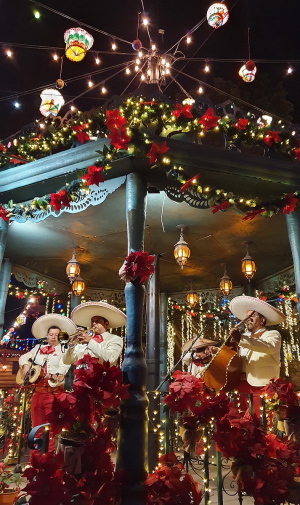 THURSDAY, DECEMBER 16: The Hispanic countdown to Christmas officially begins tonight with Posadas Navidenas (or, more simply, Las Posadas) across Mexico, in Guatemala and in regions of the United States. Tantalizing dishes, merry carols and the story of the nativity has been bringing together communities in Mexico for more than 400 years in a beloved tradition that lasts nine nights and ends on Dec. 24. Each night of Las Posadas, a small, candlelit procession travels through a neighborhood, its participants dressed like Mary, Joseph, angels and shepherds, reenacting the search for a safe place to welcome the infant Jesus. Often, musicians follow the group, as do accompanying members of the community. (Note: According to news reports, this tradition will be adjusted in many communities in 2021, in accordance with continuing pandemic restrictions and/or requirements.)

Did you know? As a learning resource, NBC News suggests Posadas Navidenas as one of five Latino holiday traditions to share with children.

Spanish for “lodging” or “accommodation,” Posada recalls the difficulty Mary and Joseph encountered on their journey. Posada describes the events of Las Posadas: as the procession stops at designated houses and asks permission to stay, it is prearranged that all homeowners turn away the visitors until the host family is reached. At the home of the host family (or, in some regions, a church), the visitors are welcomed inside, and all present kneel before a nativity. Following prayers, tamales and ponche navideno are served, washed down with rompope, a Mexican drink with a taste similar to eggnog. Children may hit a five- or seven-pointed piñata, often filled with dried fruits, sugar sticks, candies and nuts. Often, Christmas carols are also sung by all. (Learn traditional carols and more at The Other Side of the Tortilla.)

FROM AN AZTEC WINTER CELEBRATION TO A NEIGHBORHOOD EVENT

Roots of the nine-day Las Posadas likely lie in the Aztec winter celebration of the sun god, which took place over nine nights; when the native peoples of Mexico were converting to Catholicism, church leaders encouraged nine nights of devotion to the parents of Jesus—focusing each evening on a month of Mary’s pregnancy.

Revelries outside of Mexico can vary: in the Philippines, Posadas highlights a Panunuluyan pageant, a type of play portraying the story of Mary and Joseph and recited in a local language. In Nicaragua, the event lasts only one day. In the United States, several regions hold some type of Las Posadas celebration, most often with carols, reenactments and plenty of Mexican food.

For recipes for tamales, rompope and more, check out an article from the Washington Post or this Pinterest page.