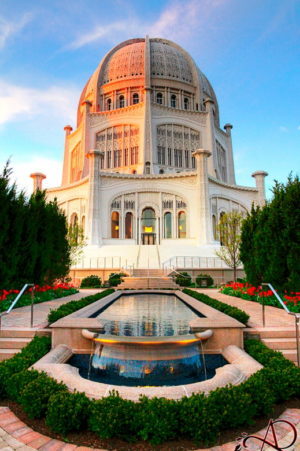 A Bahai House of Worship in Wilmette, Illinois. Photo by Adib Roy, courtesy of Flickr

SUNSET MONDAY, JULY 8: The world’s more than 5 million Baha’is pause to recall the solemn anniversary of their religious founder’s public execution at noon on July 9, for the Martyrdom of the Bab. As one of nine holy days of the year, the Martyrdom of the Bab commemorates the anniversary of an event that occurred on this date in 1850. The events that ensued on the day of his death, however, have left millions in awe for more than a century.

Interested in a Baha’i perspective of the harmony between science and religion? Check out this TEDx talk on YouTube.

PERSIA, BABI AND THE BAB

THE EXECUTION AND FINAL CONVERSATION

Did you know? A Baha’i House of Worship is open to non-Baha’is as well as Baha’is. Holy scriptures of the world’s religions are recited in Baha’i temples.