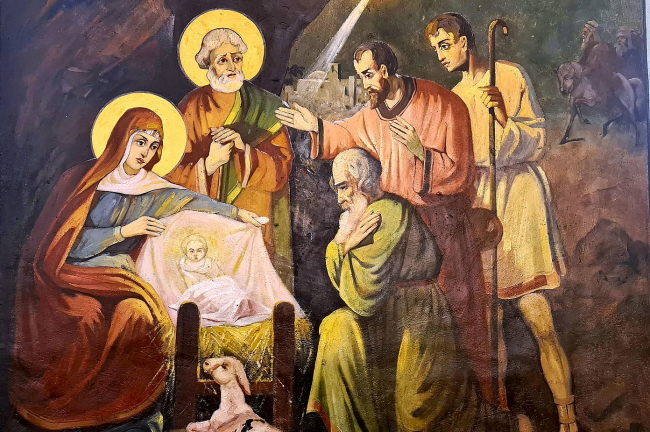 MONDAY, NOVEMBER 15: While the American Thanksgiving has not have arrived yet, millions of Orthodox Christians around the world are turning toward the season of Jesus’s birth—which they refer to formally as the Nativity—with, today, the start of the Nativity Fast. For many centuries, Eastern Christians have prepared for the Nativity with a 40-day Nativity Fast.

Note: The variance between starting on (what today is) November 15 and 28 stems from traditional methods of keeping the calendar through many centuries. Some Orthodox church headquarters in the U.S. now list both dates on their websites, because parish leaders know that some families who attend prefer to follow one calendar, while others may follow calendars that match relatives in their countries of origin.

Two periods comprise the Nativity Fast (the dates of which are stated, here, per the Gregorian calendar): Nov. 15-Dec. 19, and Dec. 20-24. December 20 launches the Forefeast of the Nativity, with chanting of Nativity hymns each day through Dec. 24 (Paramony). On Paramony—called Christmas Eve in the Western Christian church—no solid food is consumed until the first star is observed in the evening sky; afterward, the fast is joyously broken. Many then head to the traditional All-Night Vigil, while others attend the Divine Liturgy for the Nativity of Christ on Christmas morning.

Did you know? The Nativity Fast thematically focuses on glorification of the Incarnation of God; the Western Advent focuses on the two comings (or advents) of Jesus.

Traditional Orthodox fasting is no simple task: It means giving up meat and dairy, in addition to fish, wine and oil (fish, wine and oil are, however, permitted on specific days). Yet Orthodox teaching instructs that fasting be undertaken with gladness and in a sense of earnest anticipation—in the promise that these devout preparations will deepen reflections on the moment when God became human. Fasting for Orthodox Christians includes abstinence from foods, negative emotions and greed. Prayer and almsgiving complement the fasting period.

THE PURPOSE OF FASTING: A SYNOPSIS

What is the purpose of fasting, according to the Eastern Orthodox Christian church? Following is pastoral advice from the website of the Antiochian Orthodox archdiocese for America:

PROPHETS AND THE AFTERFEAST

Throughout the Nativity Fast, several key figures are highlighted with feast days—in particular, the prophets who Eastern Christians believe laid the groundwork for the Incarnation: Obadiah, Nahum, Habbakuk, Zephaniah, Haggai, Daniel and the Three Holy Youths. Sundays leading up to Nativity also bring attention to ancestors of the church and righteous men and women who pleased God.

On December 25 (or January 7), the Feast of the Nativity, fasting is forbidden; a fast-free period, or Afterfeast, lasts through January 4—or later, depending on one’s calendar.