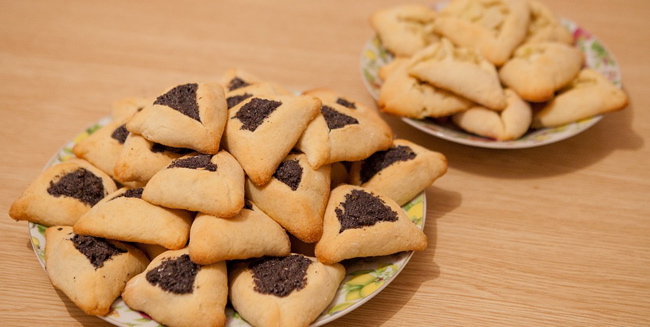 Hamantaschen, or “Haman’s pockets,” are a Purim treat. Photo by xeno4ka, courtesy of Pixabay

SUNSET MONDAY, MARCH 9: Eat! Drink! Be merry! The story of Purim is found in the pages of the book of Esther in the Hebrew scriptures of the Bible.

Today, with the start of Purim, fruit-filled cookies are served, outrageous costumes are donned, plenty of wine is consumed and comical skits entertain jovial audiences. In the synagogue, readings from the book of Esther evoke hissing, booing and stomping, as Jews “blot out” the name of the villainous Haman. Interestingly, the name of G_d is not mentioned in the book of Esther, and many Jews interpret this as indication that G_d works in ways that are not always apparent. On Purim, disguises and costumes serve as symbolism of G_d “hidden” behind the scenes.

ESTHER, MORDECAI AND AHASUERUS: THE STORY

When the beautiful young Esther was taken to the house of Ahasuerus, the king of Persia, she hid her Jewish identity. Esther’s guardian, Mordecai, held a key position in the kingdom but was hated by the king’s advisor for refusing to bow down to him. In a rage, the king’s advisor—Haman—plotted to kill Mordecai and all of the Jews.

The turning point was the king’s love of Esther, who was chosen to be his queen. Though Haman had already convinced King Ahasuerus to kill the Jews in Persia, Esther fasted for three days, approached the king and revealed her own Jewish identity, pleading with the king to save the Jewish population. The king later hanged Haman and his 10 sons on the gallows that had been prepared for Mordecai. The Jewish people in Persia were saved from the plot of Haman.

Popular Jewish author and columnist Debra Darvick, who penned This Jewish Life with real-life stories about men, women and children observing the festivals and milestones that mark the Jewish calendar, describes the way families approach the holiday of Purim this way:

“On the 14th of the month of Adar in the Jewish calendar, hilarity reigns as the holiday of Purim is celebrated. One is commanded to drink enough liquor so that it becomes impossible to distinguish between the phrases ‘cursed be Haman’ and ‘blessed be Mor- dechai.’ In Hebrew these words become a tongue twister, so it doesn’t take much.”

The carnivals and masquerades of Purim are accompanied by the four primary obligations of the day: to listen to a public reading of the book of Esther in the evening and the morning; to send food gifts to friends; to give charity to the poor; and to partake in a festive meal.

The signature treat for this holiday is Hamantaschen: Haman’s pockets. FeedTheSpirit columnist Bobbie Lewis tells the story of baking these delicious triangular treats in her family—and provides her own recipe for these cookies.

EXTRA RECIPES: An array of Purim recipes can be found at AllRecipes. For a crunchy take on Haman’s pockets, try these—made of Rice Krispies. Thirsty? Try making your own apricot-infused bourbon for Purim.