SUNSET FRIDAY, MAY 26: As a crescent moon appears and is spotted around the globe, the world’s 1.8 billion Muslims—nearly a quarter of Earth’s population—begin the month of Ramadan. (Note: Starting dates in communities around the world may vary by location and by method of calculation.)

Because the Islamic calendar is lunar, the beginning and end of Ramadan is based on a crescent moon sighting that is typically visible 1-2 days after the astronomical new moon. The end of Ramadan—the ninth month of the Islamic calendar—is met with Eid al-Fitr, a festival of the breaking of the fast. Eid al-Fitr marks the beginning of the next lunar month, Shawwal, and is a time of great feasting and family celebrations. The majority of our readers live in North America—and, this year, the Islamic Society of North America, says the Eid will begin on Sunday June 25.

As Ramadan moves slowly around the Gregorian calendar, 2017 will cover some of the “longest” days of the year in the Northern Hemisphere—which, for observant Muslims, equates to more hours of daytime fasting. This year, Ramadan will incorporate the summer solstice, on June 20—the “longest” day of the year for those living in the North.

This spring, the Pew Research Center’s analysis of global religious trends reports that—based on worldwide patterns of childbirth—Islam is likely to emerge as the world’s most rapidly growing religion in the years ahead. You can download the complete report here in PDF format. That Pew report is the source of our reference above to 1.8 billion as the world’s current Muslim population. Christianity remains the world’s largest religion with 2.3 billion adherents, Pew reports. 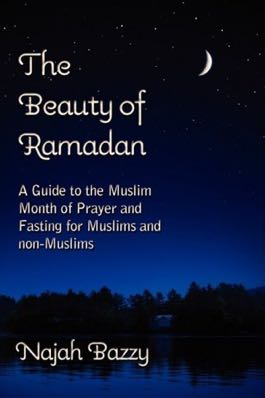 Bazzy’s book explains much more about the rich experience of this month for Muslim families. It also clearly explains a lot about the month’s practices, making the book helpful for educators, anyone in public service and neighbors or co-workers with Muslim friends.

Fasting is a tradition in nearly all of the world’s great faiths—but the word “fasting” can refer to many different forms of this ancient tradition. In some traditions, giving up meat or other kinds of foods is a fast. In other groups, a fast may be the elimination of a single meal—or it may refer to avoiding food, but not liquids. Three dates are traditionally consumed at the end of each day’s fast during Ramadan. Photo courtesy of YouTube

Muslims observe the month of Ramadan with a strict sunrise-to-sunset fast, which means that nothing passes the lips during those hours. All food and drink (including water) is prohibited. Meanwhile, prayer is increased, as is reading from the Quran. According to Muslim belief, the first revelation of the Quran to Muhammad occurred during Ramadan, and as such, observance of the month is one of the Five Pillars of Islam. Many Muslim communities around the world invite special vocal interpreters of the Quran to come to mosques and chant the sacred text, night after night, until the entire holy book is completed.

During the month of Ramadan, Muslims partake in a pre-dawn meal known as the Suhoor, and do not return to eating until after sunset—with the iftar.

Three dates customarily break the fast each day of Ramadan, and an iftar meal is often an occasion for social gatherings, large feasts and buffet-style hosting. Occasionally, Muslims describe the night-time iftar tradition as “like a series of Thanksgiving dinners,” because friends and family often visit each other during the nights of Ramadan—and favorite dishes frequently are prepared for these feasts. In addition to fasting, Muslims donate to charity during Ramadan. Charity, known as zakat, sometimes translated as “the poor-rate,” is an obligatory practice.

Do you know Muslim friends, neighbors or co-workers? Michigan State University’s Joe Grimm reports on an easy and friendly way to reach out during Ramadan.