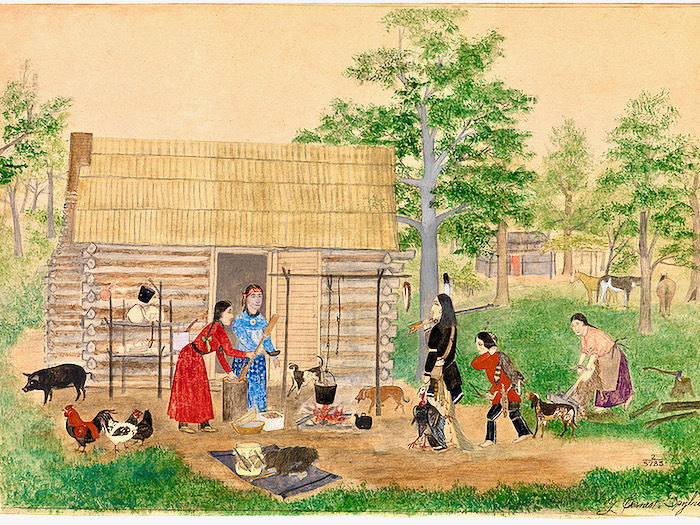 Thanksgiving, as the United States’ origin story, leaves out painful truths about the nation’s history. Giving thanks, however, has always been part of Native Americans’ everyday lives. Image: Earnest L. Spybuck (Absentee Shawnee, 1883–1949). “Shawnee Home Life about 1890,” painted in 1910. Pottawatomie County, Oklahoma. (CLICK on this image to visit Smithsonian magazine, where you can read the entire article that features this painting by Earnest Spybuck.)

Resources for Remembrance and Reconnection

THURSDAY, NOVEMBER 25—Perhaps the American culture surrounding Thanksgiving now is so far from its roots in the 1600s that questions about our “American” relationships with our continent’s original residents have become irrelevant. There’s a strong argument that American Thanksgiving culture now focuses overwhelmingly on food, family, sports and early Christmas shopping. At this point, for millions of Americans, our moral responsibility to our Indigenous neighbors is far from the front of our hearts and minds on the holiday.

We are not the only ones to have forgotten any Thanksgiving roots in the 1600s. Those scenes were far from the minds of George Washington and Abraham Lincoln when they established national Thanksgiving holidays.

For both presidents, Thanksgiving was mainly a time to celebrate having survived wars. Read George Washington’s original 1789 Thanksgiving Proclamation and two things are obvious: First, he never mentions Native Americans. Second, he is calling on Euro-Americans to celebrate that they have survived the Revolutionary War and seem to be thriving. Read Abraham Lincoln’s 1863 Thanksgiving Proclamation and the same two truths are clear: The “thanks” involves the Civil War and Native Americans are invisible. In fact, Lincoln celebrates the westward expansion of European immigrants.

The next major holiday milestone, 1939, was President Franklin Roosevelt’s Thanksgiving Proclamation. Once again we see the same truths: No mention of Indigenous people, although FDR did salute the Pilgrims, and once again Thanksgiving is tied to war, the global “turmoil” that would become World War II. In fact, in 1939, the truth that FDR never mentioned in his proclamation was: Americans needed to shop! Roosevelt’s big decision that year was to move the holiday slightly earlier—on the next-to-the-last Thursday of November—after concerted lobbying by the merchandizing tycoon Fred J. Lazarus, founder of Federated Department Stores, which became Macy’s. (Check out Macy’s own timeline and scroll down to 1939.) Native Americans certainly had nothing to do with that huge marketing effort.

In fact, the largely fanciful tales of a Pilgrim-and-Indian Thanksgiving feast shared in school pageants nationwide were not commonly known in Washington’s and Lincoln’s eras—and were barely on FDR’s cultural radar screen. When these images were merged with all the holiday hoopla in schools after World War II, Native leaders were so perplexed and uncomfortable with this story that they began to protest. 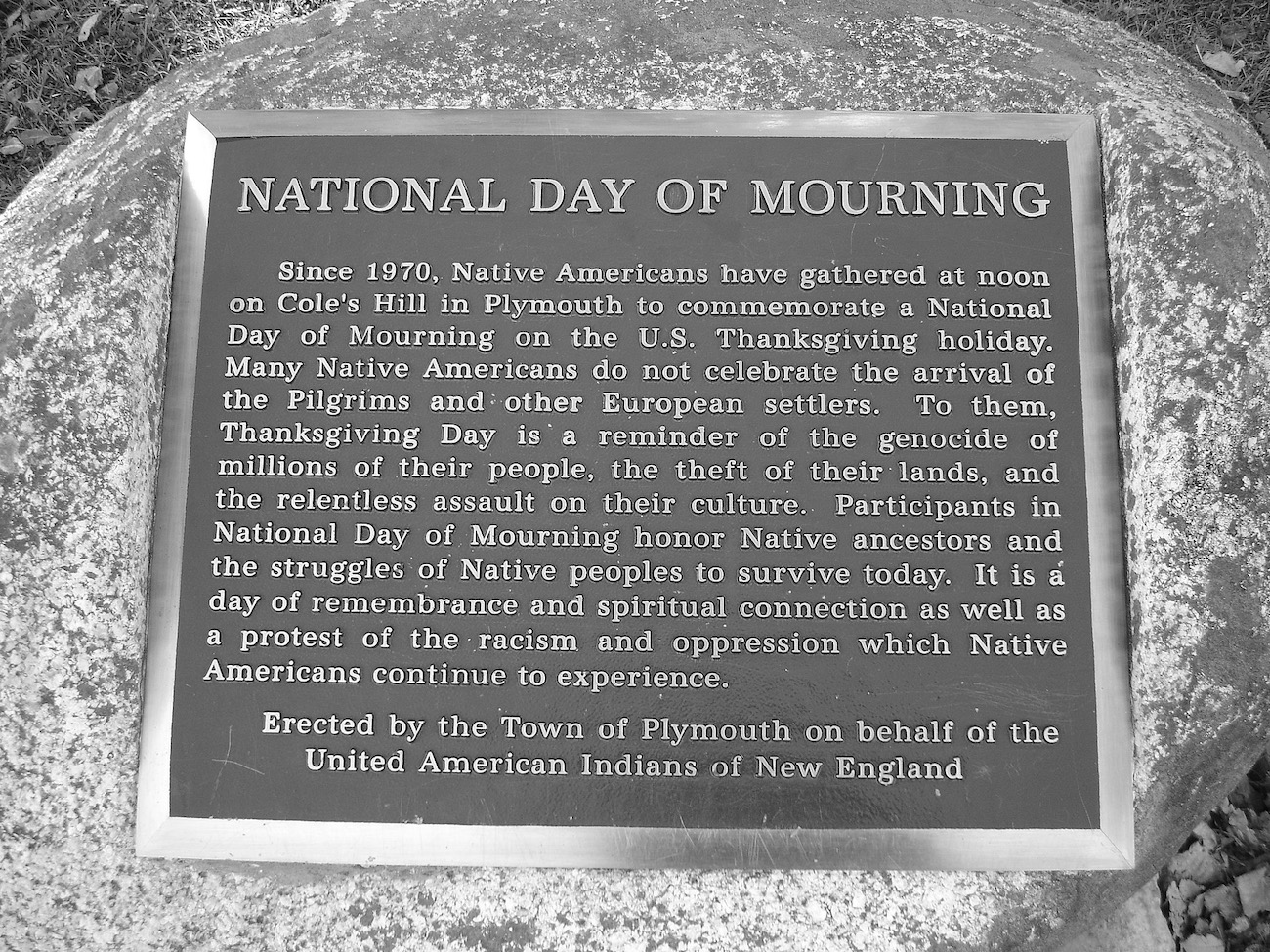 Click on this photo to enlarge it for easier reading.

The first National Day of Mourning was held in 1970. Wikipedia describes the events leading to this protest that created an alternative holiday:

For the 350th anniversary in 1970 of the Pilgrim’s arrival in North America (landing on Wampanoag land), the Commonwealth of Massachusetts planned to celebrate friendly relations between their ancestors and the Wampanoag. Wampanoag leader Wamsutta, also known as Frank James, was invited to make a speech at the celebration. When his speech was reviewed by the anniversary planners, they decided it would not be appropriate. The reason is given: “…the theme of the anniversary celebration is brotherhood and anything inflammatory would have been out of place.” Wamsutta had based his speech on a Pilgrim’s account of the first year in North America: a recollection of opening of graves, taking existing supplies of corn and bean and selling Wampanoag as slaves for 220 shillings each. After receiving a revised speech, written by a public relations person, Wamsutta decided he would not attend the celebration. To protest the attempted silencing of his position detailing the uncomfortable truth of the First Thanksgiving, he and his supporters went to neighboring Cole’s Hill. Near the statue of Massasoit, the leader of the Wampanoag when the Pilgrims landed, and overlooking Plymouth Harbour and the Mayflower replica, Wamsutta gave his original speech. This was the first National Day of Mourning.

In fact, the central theme of the educational materials developed by Native American leaders working through the Smithsonian’s National Museum of the American Indian focus on properly crediting Native Americans as part of this nation’s Thanksgiving tradition.

Here are some media resources to help you, your family, your congregation and community rethink Thanksgiving as it relates to our Indian neighbors:

2021 WASHINGTON POST REPORTING—One of the most in-depth stories we’ve seen in 2021 was reported by Dana Hedgepeth, headlined: This tribe helped the Pilgrims survive for their first Thanksgiving. They still regret it 400 years later.

THE NATIONAL MUSEUM OF THE AMERICAN INDIAN provides some very helpful educational materials. Here is the gateway page that introduces American Indian Perspectives on Thanksgiving. Then, if you care to jump directly to the downloadable PDF of the study guide, you can visit this page.

NATIVE VOICES CONVERGE—The Smithsonian magazine’s collection of Native voices concerning Thanksgiving began with a 2011 column written by Dennis W. Zotigh, a  writer who is part of the Kiowa and Ohkay Owingeh Pueblo and Isante Dakota peoples. It all began when Zotigh was asked by the Smithsonian to answer the question: Do American Indians Celebrate Thanksgiving? What happened next surprised the Smithsonian editors: Native voices from across the nation began attaching comments to the original story. So, over a decade, Zotigh’s original words have been expanded.

HULU TASTE OF THE NATION—If you have access to HULU, check out the “Truth and the Turkey Tale” episode of Padma Laksmi’s series Taste of the Nation.

LAND ACKNOWLEDGMENT AS A SMALL FIRST GESTURE—This year, our online magazine is highlighting emerging stories about relationships with our Native American neighbors. We have been reporting on both the tragic history and the multi-faceted opportunities, today, in establishing cooperative relationships. As residents of North America, we have an enormous amount of work ahead of us, including coming to terms with centuries of trauma in North American Indian boarding schools. Author and journalist Bill Tammeus reported this recent story for us about the emerging practice of “land acknowledgement.” Bill also provides many links to great reading and online resources—including a very useful Native Land app for smartphones.

‘INVENTION OF THANKSGIVING’ VIDEO—In this short video, shared via the Smithsonian’s National Museum of the American Indian, Paul Chaat Smith (Comanche and co-curator of the award-winning exhibition Americans) looks at why the Thanksgiving story is so important to the United States’ image of itself as a nation. NOTE: Because this video is shared via YouTube, you can also share it with family, friends, your class or small group. 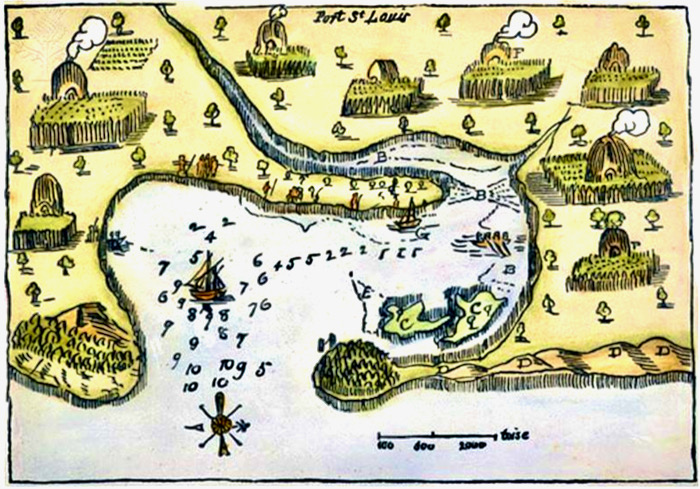 FINALLY, A HEARTBREAKING MAP: In 1605, explorer Samuel de Champlain had this detailed map drawn of the thriving Wampanoag village he visited along the shoreline where Pilgrims would land 15 years later. Between de Champlain’s visit and that historic 1620 landing by the Pilgrims, a virulent epidemic had raged through Wampanoag tribal lands that killed virtually all of the men, women and children in this particular village. The disease, an infection with symptoms similar to smallpox, was the result of early contacts with Europeans that spread the epidemic throughout the native communities. As the Pilgrims landed in 1620, they soon realized they were moving into what amounted to a ghost town. When Pilgrims explored the village’s ruins, they found ghastly evidence of the epidemic, including unburied skeletons of the last few native men and women to die. To learn more about the Wompanoag, you’ll enjoy Wikipedia’s extensive article with many links to other resources.