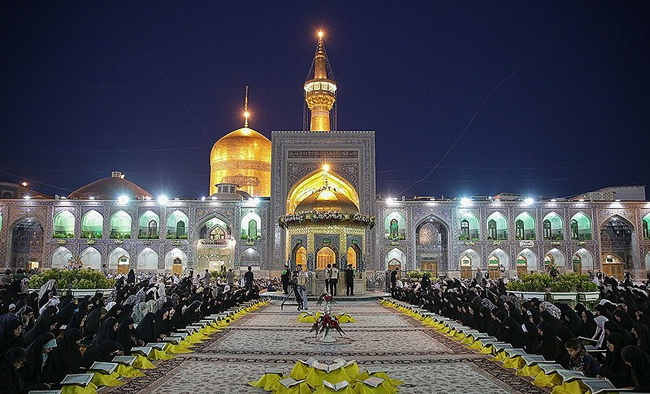 Muslims gather for a Quran reading during Ramadan in Iran. Photo courtesy of Wikimedia Commons

SUNSET SUNDAY MAY 5: The crescent moon shines in the night sky as Ramadan 2019 begins for Muslims around the globe, ushering in a month of daytime fasting, intense prayer and shared nighttime meals. Though an official moon sighting—and start date of Ramadan—is announced from Saudi Arabia, localized moon sightings may still vary slightly by region. (Learn more here about the crescent moon sighting, vital to the start of Ramadan, from the website of the main North American council of Islamic scholars.)

As the Islamic calendar is lunar, the beginning and end of Ramadan is based on a crescent moon sighting that is typically visible 1-2 days after the astronomical new moon. The end of Ramadan—the ninth month of the Islamic calendar—is met with Eid al-Fitr, a festival of the breaking of the fast. Eid al-Fitr marks the beginning of the next lunar month, Shawwal, and is a time of great feasting and family celebrations. 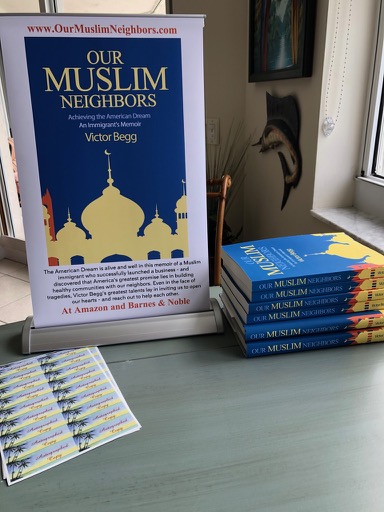 Author Victor Begg is an experienced public speaker and group leader. He’s already scheduling appearances across the U.S. Contact him via his website if you’re interested in inquiring about his schedule.

Early in 2019, we encouraged our readers to make a special commitment this year. You can read that entire column here. The story opens this way …

Join all of us at our publishing house in making this New Year’s Resolution: Meet a Muslim.

Most Americans have never actually met our millions of Muslim neighbors. It’s time to change that. If we do reach out, we usually discover new friends with similar values—and the entire community is enriched by our new friendships.

This week, we are making this process easier than ever before. You can meet Victor Begg, his wife Shahina and their entire family in the engaging new memoir, Our Muslim Neighbors—Achieving the American Dream, an Immigrant’s Memoir. Victor welcomes readers into a fascinating family story in which readers are likely to recognize the personalities of their own mothers, fathers and other family and friends.

Readers certainly will recognize their core American values and will enjoy reading about Victor’s courageous attempts to live out those values, sometimes in the midst of tragedy.

RAMADAN: MUHAMMAD AND THE QURAN

Of every month in the calendar, Muslims hold Ramadan to be the most favorable for the revelations of God to humankind. Specifically, Ramadan recalls the month when the first verses of the Quran were revealed to the Prophet Muhammad. Because the Quran was given to the Prophet during this month, Muslims usually spend more time with the Quran—often visiting mosques and other Muslim centers where the entire Quran will be recited aloud during the course of the month.

During this special month, devotees also gain a better understanding of the conditions surrounding those less fortunate around the world, and charitable works skyrocket during Ramadan.

FASTING (AND THE IFTAR)

Tradition states that God not only suggested fasting, but demanded it for those physically and mentally able. During Ramadan, the ninth month of the Islamic calendar, all able Muslims are required to refrain from eating and drinking during daylight hours in the hopes that they will gain a closer relationship with Allah.

A fast-breaking meal known as Iftar replenishes the body’s food stores after a long day: the meal starts with dates, in the practice of Muhammad himself, followed by a feast prepared for family and friends.

During the night, Muslim countries are alight and alive with lanterns in houses and mosques, lights in public squares and joy all around.