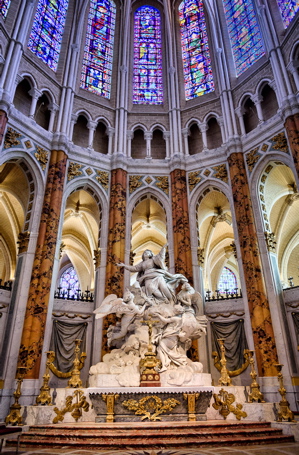 The Assumption of the Virgin Mary, Chartres Cathedral, France. Photo by Joe deSousa, courtesy of Flickr

WEDNESDAY, AUGUST 15: The Eastern Orthodox Dormition Fast (begun Aug. 1) has ended, and Christians bow their heads, today, for the Assumption of the Blessed Virgin Mary and Dormition of the Theotokos. Two names for the same event, both the Assumption and the Dormition proclaim that Mary, the mother of Jesus, was assumed into heaven in body and soul. Whether or not Mary died before being assumed does vary by tradition—for Catholic Christians, the question remains open, while for Orthodox Christians, firm belief holds that she did, in fact, die a mortal death.

MARY THROUGH THE CENTURIES

In the East: Eastern Christians believe that the Virgin Mary died a natural death, and that her soul was received by Christ upon death. Three days following, Mary’s body was resurrected, and she was taken up into heaven, bodily. (Learn more from the Orthodox Church in America.)

In the West: Catholics are divided in thought as to whether or not Mary died, bodily, as this theory has not been dogmatically defined either way. (Global Catholic Network has more.)

No details suggest the day or year of Mary’s Assumption, though it is believed that when Mary died, the Apostles flocked to her bedside. At the moment of her death, Jesus Christ descended, and carried her soul to Heaven.