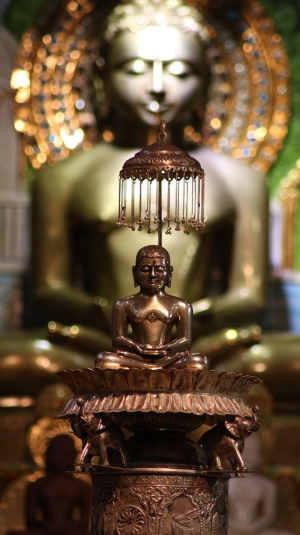 MONDAY, AUGUST 23-TUESDAY, SEPTEMBER 1: Observed by Shvetambar Jains for eight days (beginning Aug. 15, this year) and by Digambar Jains for 10 (beginning Aug. 23, this year), the period of Paryushan means daily fasting, inner reflection and confession. (For Digambar Jains, the festival is also sometimes known as Das Lakshan, or Das Lakshana.) In India, monks and nuns take up residence in Jain centers during this period, providing guidance to the laity; the custom is now practiced in the United States, too.

2020 News: While many prayers and readings during this period are usually performed or undertaken at Jain temples, many temples are closed this year due to coronavirus. Instead, many Jain places of worship—such as this one, in California—are hosting virtual programs during Paryushan.

According to Young Jains of America, pari translates into “all kinds,” and ushan translates into “to burn,” so by one aspect, Paryushan involves burning all types of karma. At its core, Paryushan is about getting closer to one’s soul through introspection and meditation.

During Paryushan and Das Lakshan, Jains often reduce their involvement in worldly affairs such as shopping, entertainment and eating out. Instead, the faithful attempt to spend time focusing inward, reflecting on habits and actions and affirming commitments to Jain principles.

(Translation: “If I have hurt you, knowingly or unknowingly, through my thoughts, words or actions, I humbly ask for your forgiveness.”)

Each evening of Paryushan, the laity pray, meditate and read from holy texts. The end of Paryushan brings the grand day when forgiveness is requested from all living beings, and Jains forgive one another in full. It’s believed that all negative karmic matter attached to the soul is overpowered when total forgiveness is asked, resulting in renewal and self-purification.

Did you know? Many Jains fast during Paryushan Parva. Some drink only between sunrise and sunset; others consume only water. At the end of the festival period, those who have fasted are often fed by loved ones and/or friends.

Though known by several different names, these festivals unite Jains through 10 key virtues: kshama (forgiveness); mardav (humility); arjav (straightforwardness); sauch (contentedness); satya (truth); samyam (control over senses); tappa (austerity); tyaga (renunciation); akinchan (lack of attachment); brahmacharya (celibacy). Together, the 10 virtues represent the ideal characteristics of the soul; by achieving the supreme virtues, the soul has a chance at salvation. Only through these virtues may people realize the sublime trio: “the True, the Good and the Beautiful.” Evil is eradicated, and eternal bliss is realized.