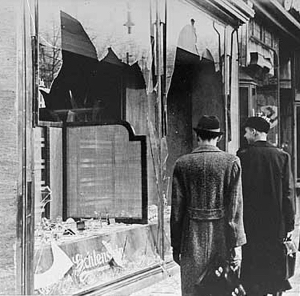 The night after Kristallnacht. Photo courtesy of Wikimedia Commons

SATURDAY, NOVEMBER 9: The sound of broken glass still echoes around the world on November 9, as communities remember the tragic events that took place in 1938 during Kristallnacht.

That is especially true across the U.S. after last year’s murder of 11 people at the Tree of Life synagogue in Pittsburgh just days before this annual memorial. Just two examples from this national conversation are this Religion News Service commentary and this piece in The Washington Post. Both of those were published in late 2018—and similar reflections are showing up this year.

Texas-based educator Deborah Fripp just published a column in The Times of Israel that included these words:

“Why do we need to teach the Holocaust? This week, as we mark the first yahrzeit[1] of the eleven people murdered at the Tree of Life Synagogue in Pittsburgh, I want to explore this question from a different angle, an angle of hopeful action.

In the aftermath of Pittsburgh, and approaching the anniversary of Kristallnacht, the question of why we need to teach the Holocaust takes on renewed urgency. Antisemitism is not a thing of the past. The stories of the Holocaust suddenly feel less like sad history and more like stark warning: Do not ignore the rising shadow of hate in your community or it may engulf you.”

Literally “Crystal Night,” Kristallnacht was so called for the shattered glass that covered streets and sidewalks after thousands of Jewish synagogues and buildings were destroyed. Kristallnacht was a coordinated series of attacks by the Nazis in Germany and Austria; German law-enforcement officials were ordered not to intervene during the destruction. Jewish persecution moved into a dramatically public and violent phase, and while their schools, stores, hospitals and places of worship were being destroyed, Jews were beaten in the streets and detained for concentration camps.

The History channel website offers some horrific images of what unfolded in 1938.

Foreign journalists in Germany reported on the events, alerting their respective homelands of the shocking events: For the first time, the public fully understood the alarming intentions of the Nazi regime. International support of pro-Nazi movements declined almost overnight, and many reports compared Kristallnacht to the gruesome pogroms of Imperial Russia.

As was written in The Times of Kristallnacht: No foreign propagandist bent upon blackening Germany before the world could outdo the tale of burnings and beatings, of blackguardly assaults on defenseless and innocent people, which disgraced that country yesterday.

Kristallnacht marked a public turning point in the Nazi regime. The attacks on Jewish neighbors, businesses and houses of worship shocked the world; the Nazi regime’s intentions could no longer be denied. The 1,400 synagogues attacked on Kristallnacht, the 90 Jews murdered that night, and the 30,000 Jews detained for concentration camps foretold of the tragedies to come.

In the 1920s, German Jews lived as other citizens: operating businesses, obtaining licenses and having access to education. Yet with the appointment of Adolf Hitler as Chancellor of Germany in 1933, things quickly began to change. Hitler immediately introduced anti-Jewish policies and forbade inter-religious marriage. When Jews sought refuge, foreign countries began locking down admissions. In August 1938, residence permits for foreigners were cancelled; thousands of Jews were forced from their homes with nowhere to go, their possessions seized by Nazi authorities. It was with these expulsions that the ground was laid for Kristallnacht.

Among those expelled from Germany was the family of Herschel Grynszpan, a 17-year-old Jew living in Paris with his uncle. When his family wrote, pleading for help, Grynszpan assassinated German diplomat Ernst vom Rath—stating that his protest had to be heard around the world. The following day, the German government removed Jewish children from public schools and halted Jewish cultural activities and publications. When word of vom Rath’s death reached Hitler, a pogrom was organized—an act that Hitler and his inner circle had been planning already, just awaiting a trigger like the shooting.