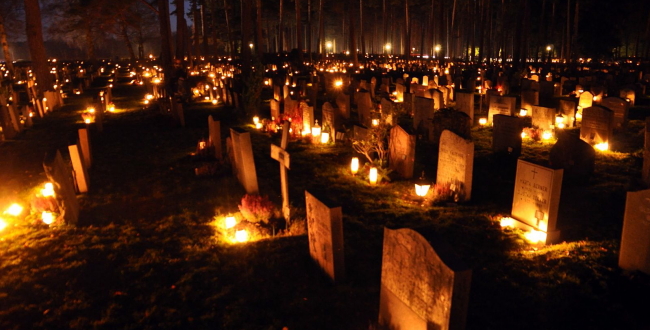 A cemetery in Stockholm, Sweden, lit with candles on All Saints’ Day. Photo courtesy of Wikimedia Commons

TUESDAY, NOVEMBER 1 and WEDNESDAY, NOVEMBER 2: Trick-or-treating may be over, but most world cultures have only begun the grand celebrations that honor the dead: In Mexico, the Day of the Dead—usually observed both days—involves home altars filled with photos of deceased loved ones and saints, a “bread of the dead,” picnicking near ancestors’ graves and even brightly-colored candies, known as “skull sugars.” In most traditionally Catholic countries, however, the festivities are distinctly different: All Saints’ Day, observed Nov. 1, commemorates those who have attained the beatific vision in Heaven; on the following day, Nov. 2, Catholics and some other Western Christian denominations remember the Faithful Departed on All Souls’ Day. In Western Catholic tradition, All Souls’ Day is a time to pray for the Faithful Departed in Purgatory, and most Christians around the world mark these two days in some manner.

Did you know? Pope Boniface IV consecrated the Pantheon at Rome to the Blessed Virgin and all the martyrs in 609 or 610 CE, and a feast for martyrs has played some part in Catholicism ever since (there is still, however, some debate of when the first “all martyrs” observance took place).

Eastern Christians mark several “all souls” days throughout the year, and Christian sects have varying takes on the holiday, too: Protestants regard all true Christian believers as saints and many Protestant congregations offer special tributes to members who have died in the past year in the early days of November.