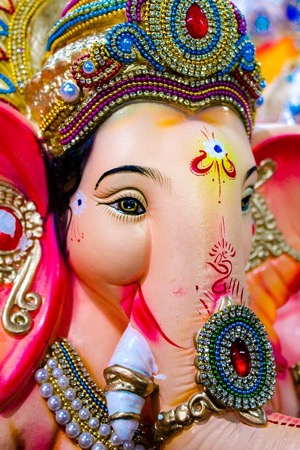 THURSDAY, SEPTEMBER 13: The sight of thousands of colorful, detailed elephant-type figures and the scent of sweet modak treats signal that Ganesha Chaturthi has arrived in India!

From a Hindu scholar: Hindu scholar, writer and activist Padma Kuppa writes a guest column in FeedTheSpirit this week, sharing her perspective on the holiday. And, Padma includes a delicious, traditional recipe as well. She includes in this column additional links to learn more about the holiday and its beloved foods.

NEWS UPDATES: Get all the latest news on Ganesh Chaturthi celebrations with an article from The Hindu; a footage video from the Times of India; and a recipe from the Mumbai Mirror. A statue of Lord Ganesh for Ganesh Chaturthi in Hyderabad, India. Photo courtesy of Fotopedia

MONDAY, SEPTEMBER 9: Today begins the annual 10-day celebration of the elephant-shaped deity, Ganesh, across India and in Indian communities around the world. The scale of these festivals—and the style of observance—varies widely across the vast territory of India, but festivities are especially robust in the region from Mumbai to Hyderabad and south. In some cases, communities compete with each other to produce the biggest and best representations of Ganesh. (Some news media spell the English version of Ganesh’s name with “a” on the end.)

Among professional artisans, new figures of Ganesh were started many months ago. Each year, representations range from less than an inch—to more than 70 feet—in height. Many firms across India not only appreciate this mega-festival, but depend on it for their annual welfare. There is even a growing demand for “eco-friendly” clay models, which is raising costs and profits for merchants.

The popularity of Lord Ganesh stems from the words of Lord Shiva, when Shiva declared his son to be superior to all other gods. Hindus believe Ganesh can remove all obstacles on the road to success, and that he is the giver of good fortune. Ganesh is the god of wisdom and prosperity, implored when new ventures begin. (Wikipedia has details.)

GANESH IN MYTHOLOGY:
AN ELEPHANT’S HEAD

Legends of Lord Ganesh vary, but the most common tale begins with the goddess Parvati and Lord Shiva. Before a bath one day, Parvati sought a guard for her door, so she crafted a young guard out of sandalwood paste and breathed life into it. The young Ganesh faithfully stood guard at her door, and when Lord Shiva returned home, Ganesh—unfamiliar with Shiva—refused to let him pass. Lord Shiva became infuriated. A complicated battle ensued, ending with Shiva beheading Ganesh.

Parvati was enraged and grief stricken; she demanded that Shiva bring him back to life. (Read more at Taj Online.) Other gods sought to help. Seeing an elephant’s mother mourning her dead own son, the gods took the head of the elephant and fixed it onto the body of Ganesh. Thus, an elephant-shaped deity was born. Shiva wound up declaring his son to be greater than any of the other gods.

Ganesh Chaturthi kicks off with the installation of Ganesh statues into festooned homes and temporary structures (pandals), where the statues are surrounded by lights, garlands and flowers. Lord Ganesh is honored for 10 days with mantras, rituals and prayer. Sweet dumplings known as modak, made from rice and wheat flour and stuffed with dry coconut and fruit, are all the rage during the festival—primarily because it was a favorite treat of Lord Ganesh.

A more public Ganesh Chaturthi began in the 17th century, although it wasn’t until two centuries later that organizers emphasized that the festivities were intended to bring together all castes and ages, labeling Lord Ganesha as “the god for everybody.” Public performances, dances, theatrics and free medical checkups gather Hindus throughout the festival, and on the 11th day (or earlier, in some localities), statues are paraded through streets before being immersed in a nearby body of water. Adherents believe that submersion symbolizes a send-off of Lord Ganesh, who carries with him devotees’ misfortunes back to his home in Kailash. A display of Lord Ganesh idols. Photo courtesy of Flickr

Ganesh figurines were originally crafted from earthen clay and returned to the soil after the festival, symbolizing the cycle of creation—until plaster of Paris (aka gypsum plaster) became more popular for mass production because of its cost effectiveness, ease of use and better finish. Ease didn’t come without a price, however, and the insolubility of Plaster of Paris—along with the chemical paints used to decorate the idols—spelled disaster for local bodies of water. Acid levels in the water skyrocketed, heavy metals became major polluters and beaches became cluttered with leftover adornments.

The government began suggesting several alternatives, such as the return to use of clay models; immersion into a bucket of water at home; the use of a permanent statue, made of stone or brass, that can be reused every year; or the use of other biodegradable materials, like papier-mâché, to create the figures. Devotees are quickly snapping up all suggestions, and many shops are returning to the age-old art of using earthen clay. (This article features interviews with multiple ‘green’ devotees.)

Indian news sources have been buzzing with reports on where Bollywood stars will spend Ganesh Chaturthi, which movies will be released on Sept. 9 for auspicious reasons, and how the rise in Ganesha idol costs will impact worshippers. Western Indian residents will be digging deep into their pockets for the expensive, low-calorie and sugar-free alternatives to traditional modaks. (Read the details at dna India.)

Yet no topic is more widely reported this year than “green” Ganpati, or Ganesh figures. So concerned is the government that the Goa Handicraft Rural and Small Scale Industries Development Corporation (GHRSSIDC) has subsidized more than 50,000 “green” statues this year. Compared to just five years ago, the number of subsidized “green” figurines has almost doubled.