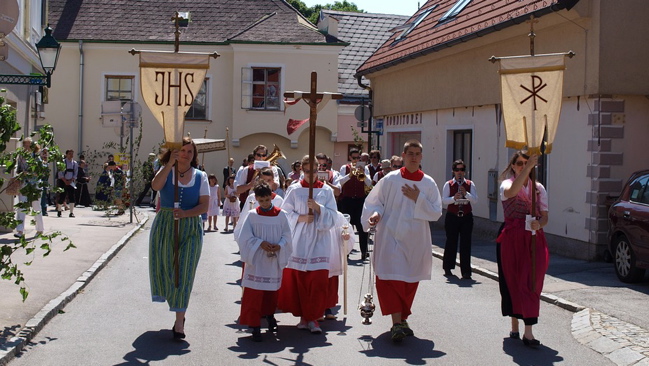 Known also as The Most Holy Body and Blood of Christ, the Feast of Corpus Christi celebrates the tradition and belief in the body and blood of Jesus Christ, and his real presence in the Eucharist. While the Eucharist is recognized and honored on Holy Thursday, its celebration can be overshadowed by the approaching Paschal (Easter) Triduum. Thus a day was designated with the sole purpose of recognizing the Eucharist. At the end of Mass on the Feast of Corpus Christi, Catholic churches may hold a procession of the Blessed Sacrament, followed by a Benediction of the Blessed Sacrament.

ORIGINS: A DAY FOR THE EUCHARIST & JULIANA OF LIEGE

The institution of a day for the Eucharist in the church calendar began with the decades-long work of Juliana of Liege, a 13th-century woman of Belgium who was orphaned and raised by Augustinian nuns. With a special veneration for the Blessed Sacrament, Juliana reported having a dream of the church under a full moon, with one dark spot: the absence of a solemnity for the Eucharist. For 20 years, Juliana had visions of Christ, and she relayed these to her confessor. Word passed, and Pope Urban IV instituted the Solemnity of Corpus Christi on the Thursday after Pentecost for the entire Latin Rite. Pope John XXII promulgated a collection of laws in 1317 that made the feast universal. The procession for Corpus Christi is a major event each year in Toledo, Spain, with one of the highlights being the gold and silver Monstrance—shown above—which dates to 1515 CE. Photo courtesy of Wikimedia Commons

THURSDAY, JUNE 19 and SUNDAY, JUNE 22: From Rome to Malta, festive processions will pass through the streets today on the Feast of Corpus Christi. (Liturgically, Corpus Christi is celebrated on Thursday; where the holiday is not a holy day of obligation, it is moved to the following Sunday.)

A feast of joy for the Eucharist, Corpus Christi has been observed since the 13th century, when various influences converged including an Augustinian nun who spent decades promoting the observance. Mystery plays, elaborate processions and wreath laying have been an integral part of the Feast of Corpus Christi for centuries.

During the 13th century, Juliana of Mont Cornillon lived among women dedicated to prayer and devotion to God. In time, according to Catholic tradition, Juliana developed a unique veneration for the Blessed Sacrament and a deep desire for an observance dedicated to it. Apart from Holy Thursday—which also recalls Jesus washing the disciples’ feet, and the impending events of Good Friday—no such feast existed at that time to solely focus on the Eucharist.

In many Catholic communities worldwide, the end of the Corpus Christi service is marked with an extravagant procession. Often, the Eucharist is placed in a ceremonial container called a monstrance; parishioners follow the monstrance and clergy through the streets, singing. (Learn more from Catholic Culture.) By the 17th century, processions had taken on several traditional figures—St. George and his dragon, Moses with a serpent and David and Goliath, just to name a few—and the crowds had become massive. (Find family activities for Corpus Christi, plus more information, at Fish Eaters and Women for Faith and Family.)

In central Europe and France, Corpus Christi is also known as “Day of Wreaths”: bouquets of flowers are perched on wooden poles, altar boys don wreaths on their left arms and girls carry wreaths on their heads. (Wikipedia has details.) Many homes are ornamented with wreaths and greenery. Worldwide, Catholics begin the Novena to the Sacred Heart today, which will continue until next Friday’s Feast of the Sacred Heart.

IN THE NEWS:
A LADDER LEADING TO … NOWHERE

In spite of the historical trip to Jerusalem recently made by Pope Francis and Patriarch Bartholomew, truces are still hard to come by in the Holy Land: At present, among other things, a giant stepladder lies directly inside the entrance of the Holy Sepulchre and “greeted Francis and Bartholomew I,” reported news sources. Left there to display ownership by Franciscan Catholics, the ladder is set up for three months each year, between Lent and the Feast of Corpus Christi. Though once used to light high oil lamps, the lamps were removed by the British in 1938; when it was discovered that even though the lamps could no longer be lit, the ladder could remain, Franciscans put the ladder back in place.