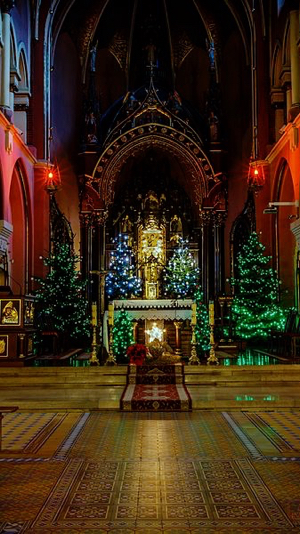 WEDNESDAY, DECEMBER 25: Sing for joy and ring the bells—it’s Christmas! The Old English Christ’s Mass celebrates the birth of Jesus Christ for Christians worldwide, hailing from snow-covered mountains to sandy beaches, crowded cities to rural fields—and everywhere in between.

Pew Research tells us that, even with declines in religious affiliation in the U.S., half of all Americans say they attend church on Christmas Eve.

Martha Stewart offers a selection of handmade gift ideas, ornament inspirations and more. Don’t leave out the kids—their crafts and printables are at Kaboose. After the stockings and wreaths are hung, it’s time to focus on the Christmas meal—an all-important aspect to Christmas in many cultures. In areas of Italy, 12 kinds of fish are served on Christmas Eve (get Italian Christmas recipes here), while in England, fare often includes goose, gravy, potatoes, bread and cider. Whether Midnight Mass interrupts your menu or not, don’t forget dessert—American cookies, traditional pudding, fruit cakes and mince pies. (Taste of Home and AllRecipes offer everything from appetizer to dessert recipes.)

DID YOU KNOW? (PARTY ICEBREAKERS)

Now, for some extra fun: Are you looking to strike up a conversation with a stranger—or that family member you only see once a year? Try tossing out a few of these interesting tidbits during your next gathering: It’s Christmas Day for the majority of the world’s 2 billion Christians, as the birth of Jesus is celebrated in great rejoicing. While the birth year of Jesus is only speculated, December 25 is embraced by a multitude of Christians worldwide as the day Mary and Joseph welcomed their newborn son in a manger. With the celebration of Jesus’s birth, the season of Advent closes for Western Christians; the Nativity Fast ends for Eastern Christians; and the 12 days of Christmastide begin. In many countries, Christmas Day is a public holiday.

Note: Some Eastern Christians mark Christmas according to the Julian calendar, which pushes many Russian, Ukrainian and Serbian churches to a January 7 celebration of Nativity (Christmas).

Many Christians believe the birth of Jesus to Mary fulfills an ancient Messianic prophesy. Two canonical gospels record Jesus as having been born to Mary and her husband, Joseph, in the city of Bethlehem. Tradition tells that the birth took place in a stable, because “there was no room for them in the inn.” Nearby shepherds, told of the birth by angels, came to see the baby; magi came later, bearing gifts for the baby Jesus. The Star of Bethlehem is believed to have led the magi to Jesus, and the visit of the magi is celebrated as Epiphany, on January 6. From the formative years of the church’s celebrations to the Nativity noted today, a multitude of customs have become associated with Christmas: displaying manger scenes, caroling, sending greetings and hanging stockings by a fireplace, to name just a few. Christian saints have been responsible for creating some of the customs—namely, St. Francis of Assisi for the nativity scene, and St. Nicholas for stockings and candy canes—while others are secular or even pre-Christian.

For a variety of traditional reasons, Orthodox churches in Russia, Georgia, Ukraine, Moldova, Serbia, Armenia, Egypt and Ethiopia hold their Nativity (Christmas) observance in January. This variance primarily involves the older Julian calendar, which pushes Christmas to January 7, but further wrinkles in the tradition affect some Armenians, Copts and Ethiopians. The very last Eastern Orthodox Christmas will be celebrated by the Armenians living in Jerusalem, who travel to Bethlehem for an hours-long, centuries-old liturgy in the Church of the Nativity that takes place as late as January 18 or 19.