The interior of the Colima Cathedral, in Mexico. Note: The Colima Cathedral was the first Catholic church in Latin America to be consecrated to the Virgin of Guadalupe, though it does not house the tilma of Juan Diego and is not the famed Catholic pilgrimage site. Photo courtesy of Wikimedia Commons

WEDNESDAY, DECEMBER 12: Catholic accounts state that on the morning of Dec. 9, 1531, the peasant Juan Diego saw an apparition of a young girl at the Hill of Tepeyac, near Mexico City: today, the series of miracles that followed are recalled on the feast of Our Lady of Guadalupe.

On Dec. 12, 1531—three days after the first apparition sighting—Juan Diego opened his cloak before a local bishop, and an image of Our Lady that is still vivid today was imprinted inside. The apparitions seen by Juan Diego bridged a gap between the natives’ belief systems and the Catholic religion, and in centuries since, the image of Our Lady of Guadalupe has been cherished across Mexico and in parts of Latin America.

THE APPARITION & THE TILMA

According to Catholic tradition: On the morning of December 9, 1531, Juan Diego was on his way to Mass. While walking, Juan Diego spotted a young girl at the Hill of Tepeyac; the girl spoke to him in his native language, Nahuatl, and asked that a church be built at the site, in her honor. Based on her words, Juan Diego recognized the girl as the Virgin Mary.

Did you know? Peasant Juan Diego was canonized in 2002. 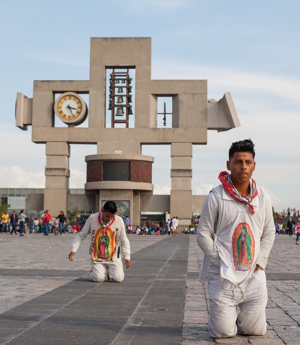 Pilgrims at the Basilica of Our Lady of Guadalupe, in Mexico City. Each year on or before December 12, pilgrims arrive—some even crawl on their knees for miles as they approach the basilica. Photo by Geraint Rowland, courtesy of Flickr

When Juan Diego approached Spanish Archbishop Fray Juan de Zumarraga, the archbishop asked for proof of the apparition’s identity. The apparition then instructed Juan Diego to gather out-of-season Castilian roses from a hilltop, and to revisit the archbishop. Juan Diego opened his cloak before the archbishop, letting the roses fall to the floor—and there, on the inside of the tilma (cloak), was an image of the Virgin of Guadalupe.

According to Catholic sources, several miracles have been associated with Juan Diego’s tilma through the centuries, including the tilma itself: with its construction of coarse cactus fiber, the tilma should have degraded hundreds of years ago. The colors forming the image of Our Lady are as yet unidentified, and in 1951, photographers discovered reflections in the Virgin’s eyes that identify the individuals present at Juan Diego’s unveiling. Studies have revealed that the stars in Mary’s mantle match what would have been seen in the Mexican sky in December of 1531.

The Virgin Mary has been deemed the “Queen of Mexico,” and in 1945, Pope Pius XII declared her the the Empress of all the Americas. Currently, the Basilica of Our Lady of Guadalupe (grounds shown, at right) competes for the most visited Catholic pilgrimage destination in the world.

Catholics everywhere can honor Our Lady of Guadalupe with a novena, or with a Mexican dinner in honor of Juan Diego and the basilica. (Find easy recipes and decoration ideas at Catholic Cuisine, and a recipe for Mexican lentil soup at The Catholic Foodie. For novenas and more, visit CatholicCulture.org.) Beef broth, flan, Mexican bread pudding and mole poblano—finished with café con leche—could all contribute to a dinner feast for the occasion.

TUESDAY, DECEMBER 16: The lively nights known as Las Posadas begin in Mexico, Guatemala and parts of the United States, bringing tasty dishes, cheerful carols and unified communities. A nine-night celebration originally from Spain, Posadas Navidenas begins December 16 and ends on December 24. Posada, Spanish for “lodging,” or “accommodation,” reenacts Mary and Joseph’s search for a safe, warm place to welcome the infant Jesus. Las Posadas has been a tradition throughout Mexico for 400 years.

Each night of Posadas Navidenas, a small, candlelit procession travels through a neighborhood. The procession stops at designated houses and asks permission to stay, but as is prearranged, the homeowners turn the visitors away. Finally, a host family for the evening (or, in some regions, a church) welcomes the visitors inside, and everyone kneels before a Nativity scene to pray. (Wikipedia has details.) After prayer, traditional tamales and ponche navideno are typically served with rompope, a drink similar to eggnog. Children may take turns hitting a five- or seven-pointed pinata, and the pinata is often filled with dried fruit, sugar sticks, nuts and candies. As processions slowly move down the streets each night of Las Posadas, additional members join the children. In most processions, select children dress as Mary, Joseph, shepherds and angels—or, the children carry images of these holy figures. Musicians sometimes follow the group, which sings at each doorstep while beckoning for a place to stay.

Las Posadas processions are gaining popularity in the Southwest United States, but the reenactments can be organized in any community.

Did you know? The popular rompope drink is believed to have been created by nuns in the convent of Santa Clara, in Puebla.

THURSDAY, DECEMBER 12: “Joyful” can hardly describe the atmosphere in Mexico today, as young and old gather in celebration of the Virgin Mary’s apparitions to Juan Diego as Our Lady of Guadalupe.

Tradition tells that on Dec. 9, 1531, peasant Juan Diego saw an apparition of a young girl at the Hill of Tepeyac, near Mexico City—a hill that held importance for the Aztecs—and the girl spoke to him in his native language, Nahuatl. The girl asked that a church be built on the site in her honor. When Spanish Catholic leaders doubted Juan Diego’s request—made a few days later, on Dec. 12—the peasant opened his cloak and out-of-season roses fell to the floor; an image of the girl, the Virgin Mary, was imprinted on his tilma (cloak).

Did you know? There are three churches dedicated to Our Lady of Guadalupe in Mexico. The basilica in Mexico City holds the tilma.

Today, the tilma hangs above the altar at the Basilica of Our Lady of Guadalupe in Mexico City. The basilica remains one of the most-visited Catholic pilgrimage sites in the world, although for Mexicans, Our Lady of Guadalupe is much more than a saint. In Mexico, she represents a mother to all, an intercessor between the faithful and God. She is widely regarded as the Queen of Mexico and the Patroness of the Americas. (Wikipedia has details.)

After the Spanish Conquest of 1519-1521, the Aztec population in Mexico was reluctant to accept Christianity: their temple of the mother-goddess, Tonantzin, had been destroyed at Tepeyac, and a chapel for the Virgin Mary had been constructed in its place. Yet a decade later, a peasant by the name of Juan Diego saw an apparition—an apparition that, despite identifying herself as the Virgin Mary, also bore symbolic and visual elements that were similar to Tonantzin. Aztecs soon began traveling hundreds of miles to see the sacred tilma, and thereafter converting to Christianity by the millions because of Our Lady of Guadalupe.

Several miracles have been attributed to the tilma since 1531, including its own self-preservation through the centuries; three studies have been published on analyses of the image and the fabric. Juan Diego was declared a saint in the Catholic Church in 2002.

IN MEXICO:
THE NUESTRA SENORA DE GUADALUPE
(AND RECIPES) The tilma imprint of Our Lady of Guadalupe. Photo courtesy of Wikimedia Commons

In Mexico, to hear men and women speak of Our Lady of Guadalupe is like hearing a description of their own mothers: humble, down-to-earth, loving. Acclaimed Mexican-American Artist Lalo Garcia explains it like this: Mexicans “have a very intimate and personal relationship with her. We talk to her, we sing to her, we dance with her … and we really do not see her up on a pedestal like we do with the saints or with Jesus on the cross. She is down (here) with us. She is with us.”

This relationship is not exclusive to Mexico. In fact, today, Godsigns columnist Suzy Farbman reports an inspiring story of how the final days of one man, the beloved patriarch of an American family, were transformed by the scent of roses.

During the evening of Dec. 11, processions fill the streets, and firecrackers provide a lively soundtrack; babies and children are dressed to represent the many Indian tribes of Mexico. (One pilgrim illustrates the scene in her blog.) A Mass of thanksgiving is conducted at the Basilica, and the following morning, devotees dress in their finest to bring roses, poinsettias and other small gifts to the altar of Our Lady. (Learn more from Catholic Culture.) The faithful outside of Mexico can—and do—set up their own shrines for Our Lady of Guadalupe, most often accompanied by Mexican baked goods and prayers to the Virgin. (Find a recipe for Mexican sopapias here.) Check listings in your community for local events, which may take place as late as this weekend.

A recent Pew report states that Latinos are now the largest minority group and among the fastest growing populations in the United States. To bring awareness of the events of Our Lady of Guadalupe to the North American audience, a recent film was released by director Tim Watkins: the 2013 investigative documentary, The Blood & The Rose. The National Catholic Register wrote about the film earlier this year.

Several cities are seeing growth in their Guadalupe events, such as Des Plaines, Illinois, where 150,000 worshipers are expected at an outdoor shrine—up from just 10 celebrants 26 years ago (Chicago Tribune has an article). Californians have been participating in the procession and mass for Our Lady of Guadalupe for 82 years—the oldest religious procession in Los Angeles—and this year, more than 30,000 are expected to turn up for the events. Nearby, a digital reproduction of the image of Our Lady of Guadalupe inspired inmates in a women’s jail, bringing new hope with the centuries-old image, reported the Huffington Post.