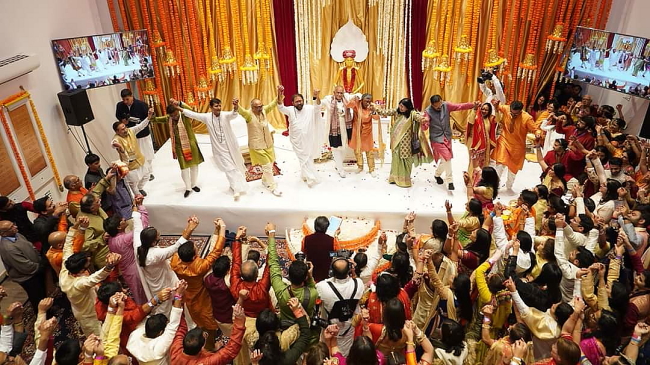 WEDNESDAY, AUGUST 24 and THURSDAY, SEPTEMBER 1: Observed by Shvetambar Jains for eight days (beginning August 24, this year) and by Digambar Jains for 10 (beginning September 1, this year), Paryushan Parva is the most important Jain religious observance of the year; it means daily fasting, inner reflection and confession. (For Digambar Jains, the festival is also sometimes known as Das Lakshana.) In India, monks and nuns take up residence in Jain centers during this period, providing guidance to the laity; the custom is now practiced in the United States, too.

Each evening of Paryushana, the laity gather for prayer, meditation and readings from holy texts. Many Jains fast during Paryushan Parva, with some drinking only boiled water between sunrise and sunset. At the end of the festival period, any who have fasted are fed by friends and loved ones. The end of Paryushana also brings the grand day when forgiveness is requested from all living beings, and Jains forgive one another in full. It’s believed that all negative karmic matter attached to the soul is overpowered when total forgiveness is asked, resulting in renewal and self-purification. For Shvetambars, the final day of Paryushana is Samvatsari Pratikraman, the annual confession. The act of asking forgiveness is extended to family and friends, and then to all living beings. This ritual of forgiveness is sometimes called the rite of universal friendship.

Did you know?  The word “Paryushan” has several meanings. One aspect is explained this way: Pari means “all kinds,” or “fully,” and Ushan means “to burn,” so during this time, a devotee “burns” “all kinds” of karma. In another aspect, the entire word “Paryushan” means “abiding,” or “coming together.”

IN THE NEWS: Current diet fads may be promoting the practice of fasting for health reasons, but most world religions have been utilizing this tool for thousands of years—and not just for physical health, but for spiritual health. As is pointed out in an article from Florida International University:

Jain fasting includes complete avoidance of food or eating only a partial meal, eliminating rare or expensive foods and avoiding sexual temptations. The holiday of Paryushan, observed annually around August to September, is the time when Jains connect communally on the core tenets of the faith through fasting and studying.

For eight to 10 days, Jains focus on the values of forgiveness, humility, straightforwardness, truth, contentment, self-restraint, penance, renunciation, nonattachment and celibacy. Fasting is also possible throughout the year by individuals, but this celebration is the common communal embracing of fasting across sects.

MONDAY, AUGUST 29: The deepest spiritual period of the year arrives for Jains today with the festival of Paryushana. For eight or 10 days (Swetambar Jains observe Paryushana for eight days; Digambar Jains observe for 10), adherents fast, study sacred texts and make a renewal of faith. A young Jain stands outside of a temple in India. Photo by Meena Kadri, courtesy of Flickr

For the duration of this festival, Jains are expected to uphold 10 specific virtues: