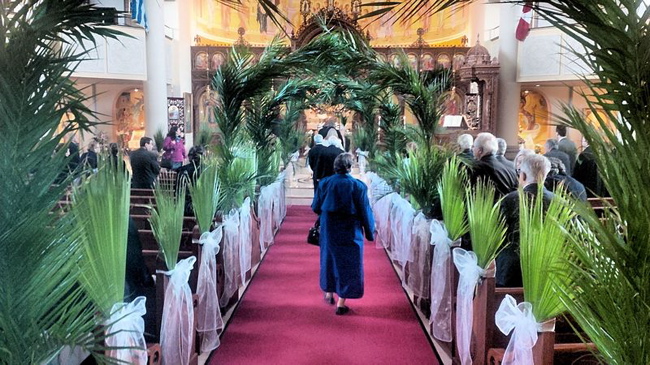 SUNDAY, APRIL 14: With Easter on the horizon and the Passion of Jesus at hand, Western Christians begin preparations for the pivotal week to come on Palm Sunday, commemorating Jesus’s ceremonial entry into Jerusalem. Holy Week commences with Palm Sunday, and according to all four canonical Gospels, Jesus rode into Jerusalem on a donkey. In joyful exultation, the crowds that had gathered in Jerusalem laid down clothing and small branches in his path.

EASTERN CHRISTIANS will mark Palm Sunday one week later, on April 21, in 2019.

THE PALM BRANCH: A MULTI-FACETED SYMBOL

Thousands of years ago, palm branches symbolized integrity and triumph. The palm-branch symbol sometimes showed up on coins and decorated important buildings and temples. In Roman Catholic, Anglican and many Protestant congregations, palm fronds are blessed and distributed on Palm Sunday. Though local species of branches may be substituted where palm fronds are unavailable—for example, box, yew, willow and olive branches are also used, among others—the branch most widely distributed is the palm. In some parishes, a procession also occurs on this Sunday. The blessed palms, regarded as sacred objects in the Catholic Church, are often kept behind household crucifixes or holy pictures and, tradition says, these fronds could be burned at next year’s Ash Wednesday services.

Every  year our readers ask for tips on palm braiding, so here are this year’s best tips:

Watch tutorials on palm braiding, or use step-by-step instructions, with help from U.S. Catholic.org, YouTube, Catholic Inspired and Fish Eaters.