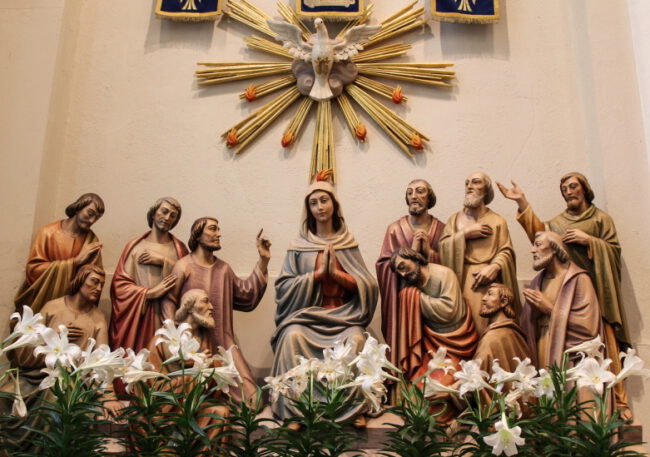 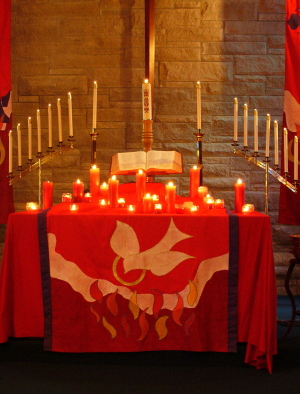 SUNDAY, JUNE 8: The world’s 2 billion Eastern and Western Christians join in celebrating the ancient festival of Pentecost today, recalling the Holy Spirit’s descent upon the followers of Jesus. Pentecost occurs 50 days after Easter Sunday. Another name for the feast, particularly in England and steeped in history, is Whit Sunday (from White Sunday, for the numerous baptisms that traditionally took place on Pentecost Sunday).

Prior to the advent of Christianity, the date of Pentecost was widely observed as Shavuot— and in fact, it was because of Shavuot that the followers of Jesus were gathered in the Upper Room, on the day that would become known as Pentecost in the Christian Church. Shavuot is still celebrated by Jews today. It was during this festival that the Apostles, Virgin Mary and other followers of Jesus would receive the Holy Spirit.

Did you know? Baptisms have been tradition on Pentecost Sunday for centuries, as Christians believe the followers of Jesus were baptized by the Holy Spirit in the Upper Room on Pentecost.

The Acts of the Apostles recounts that when the followers were gathered in one room, a sound like rushing wind came from heaven, filling the entire house; tongues of fire descended upon each of the Apostles. Suddenly, they began to speak in multiple languages—so that they could preach in many lands. In many American churches, Pentecost will be described as “the birthday of the church.”

Whether Eastern or Western Christian, the feast of Pentecost is a rich, meaningful and colorful event. Orthodox churches are often decorated with greenery and flowers—similar to the Jewish tradition for Shavuot—and the feast lasts a full three days. (Find more at the Greek Orthodox Archdiocese of America.) The Afterfeast of Pentecost continues for one week.

In Western churches, “seeing red” is a bit of an understatement—priests, ministers, choir members and even congregation members often wear the color red, reflecting the joy of the fire of the Holy Spirit. (Get a Catholic perspective from Global Catholic Network.) Red banners are hung from walls and ceilings, and the brass ensembles provide music today, in audio representation of the “mighty wind” that filled the Upper Room on Pentecost.

Did you know? During the Middle Ages, cathedrals in Western Europe were given Holy Ghost holes—small openings in the roof—so that the Holy Spirit could descend upon the congregation. At Pentecost, the Holy Ghost holes were decorated with flowers, and in some regions, dove figures were lowered through the holes while the story of Pentecost was being read.

Across the Christian community, Pentecost is among the most ancient of feasts: Paul noted its celebration and prominence among Christians in the 1st century CE. (Wikipedia has details.)

As crowds pour into church for Pentecost Sunday services today, many congregations must face a new reality: nationally, one in five Catholic parishes does not have a resident priest. What’s more, the average age of priests is 63, and seminary enrollment isn’t growing. (Read the story from USA Today.) Meanwhile, America’s Catholic population is, in fact, on the rise. While the number of Catholic priests in America has dropped 33 percent since 1975, America’s Catholic population has risen a whopping 43 percent during the same time period.

In response to the people’s need for more priests, the Vatican has asked an advisory board of bishops to gather in Rome for a summit addressing the topic this October.