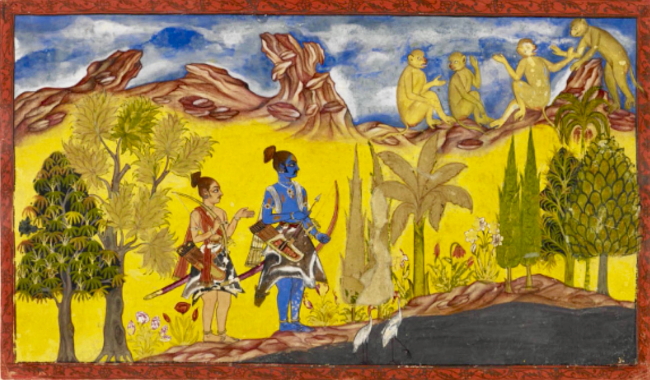 A photo of a portion of a Ramayana manuscript. The image depicts Rama and Lakshmana arriving at the rocky terrain near Lake Pampa, in their search for Sita. Photo courtesy of Wikimedia Commons

WEDNESDAY, MARCH 25 and THURSDAY, APRIL 2: With the birthday of Lord Rama on the horizon, millions of Hindus begin Ramayana Week to prepare for the occasion. During these auspicious days, devotees read the timeless epic, witness narrations of the exciting events in Rama’s life and fast for the deity. Though some fast only on the birthday of Lord Rama, many fast during the entirety of Ramayana Week. During Ramayana Week, it is common for temples to hold a non-stop recital of the epic Ramayana.

The story of Lord Rama is recorded in an ancient epic written by Valmiki, one of the first Sanskrit poets. Most historical references date the Ramayana to sometime between the 4th and 2nd centuries BCE, though scholars debate the date. Through the centuries, the Ramayana has taken on many versions—for which Wikipedia devoted an entire article—and the complex story incorporates thrilling battle scenes and climactic events. Through the year, the international initiative Read Ramayana brings the epic tales to the electronic devices of thousands across the globe. (Check out its Facebook page here.)

This year, the birthday of Lord Rama—Ramanavami—will fall on April 2. 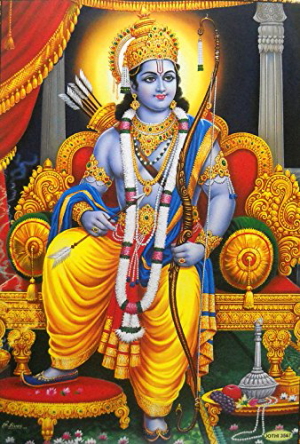 RAMANAVAMI: THE BIRTH OF LORD RAMA

The story of Lord Rama has been read and recited and reviewed by Hindus worldwide, during Ramayana Week—all leading up to today’s climactic festival, Ram Navami. (Spellings vary; Ramanavami and Ramnavami are also common spellings.) Celebrated as the birth of Lord Rama, the seventh avatar of Vishnu, Ram Navami recalls the righteous, peaceful and presperous reign of the ancient kingdom under Sri Rama. The epic Ramayana, read during Ramayana Week, tells the exciting and thrilling adventures of Rama and the widespread anticipation of the long-awaited heir of King Dasharath of Ayodhya. Many Hindus believe that listening to the story of Rama cleanses the soul.

Legend has it that Rama was born at noon: Rama’s dynasty has been linked with the sun, and at noon, the sun is at its brightest. At home, Hindus set pictures of Lord Rama, his wife (Sita), Hanuman and Lakshman in places of importance; puja is performed with joy. It is common to fast from onions, wheat products and several other foods on Ramanavami, and community meals free of these foods share the gaiety of the festival. In temples, fruits and flowers, Vedic chants and mantras are offered to Sri Rama. In South India, the wedding of Rama and Sita is ceremonially recognized.

Care to See a Movie Version?

Various cinematic versions have been produced from these stories for Indian audiences, including some lengthy TV series. Two of the most popular TV versions are streaming at the moment. Amazon has the 2008 TV series for a fee. Netflix has the 2012 TV series streaming, free to subscribers. Just search for “Ramayan” on either Amazon or Netflix.