“In order to serve God, one needs access to the enjoyment of the beauties of nature—meadows full of flowers, majestic mountains, flowing rivers. For all these are essential to the spiritual development of even the holiest of people.” 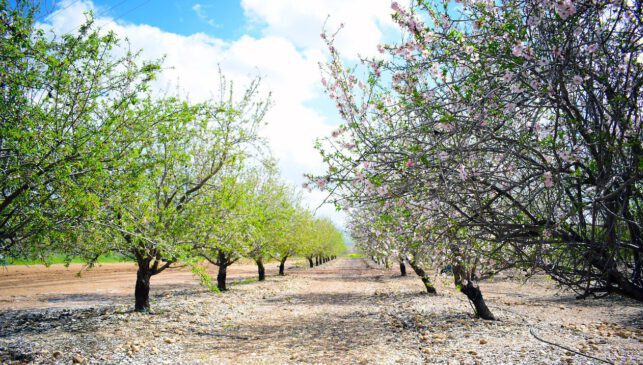 SUNSET WEDNESDAY, JANUARY 27: Winter is still in full swing in the Northern Hemisphere, but today in Israel, a vital component of nature is honored: It is Tu B’Shvat, the New Year for Trees. Known also as Jewish Arbor Day, it’s customary (in places where the ground isn’t frozen) for Jews to plant a tree today—and this tradition has done wonders for the Holy Land (keep reading to find out why). The purpose of Tu B’Shvat is to calculate the age of a tree for tithing and for eating.

Many observant Jews have long followed a passage from Leviticus that forbids the eating of a tree’s fruit for the first three years of its life, and so by following this easy-to-remember holiday, Jews can keep the biblical instructions. (Read more, plus lots of related articles, at Chabad.org.)

What do Jews do on this day dedicated to trees and fruit? Plant trees, and then eat plenty of fruit, of course! Customarily, devotees either eat a new fruit today or eat one of the Seven Species abundant in the land of Israel. Since the Seven Species consists primarily of grains and sweet fruits, today’s meal is usually a sweet one. For Jews who can’t plant trees today, the tradition of collecting money to plant trees in Israel is popular.

ISRAEL: A LAND ABUNDANT IN TREES

In modern-day Israel, Tu B’Shvat is celebrated as an ecological awareness day. Ecological organizations in Israel and the diaspora often promote environmental-awareness programs on this day, and trees are planted in celebration.

In the global green movement, Tu B’shvat has been attracting major media attention as Jews around the world remember, today, that “man is a tree of the field”—and non-Jews can take part in Tu B’shvat by reflecting on our connection with nature. (Green Prophet has an environmental perspective on Tu B’shvat.) A dedicated tradition of tree-planting can make a major difference. Israel was one of the few countries in the world to have more trees on its land at the end of the last century than it had at the beginning.

Tu Bishvat, the Jewish New Year for Trees, falls on the 15th day of the month of Shevat. This year, it begins on Friday evening, February 10. An ancient commemoration of the start of the agricultural year, Tu B’Shevat is one of four annual Jewish New Years.

Why record the age of trees? In centuries past, farmers would mark the age of their trees in order to calculate their eligibility for fruit harvest and tithing. According to Leviticus 19:23-25, a tree’s fruit may only be eaten after its fifth year: in the first three years the fruit is forbidden, and in the fourth year, the fruit must be set apart for God. When the State of Israel was reestablished, in 1948, interest in the ancient festival surged. Jewish people were farmers, once again, and the fruits of the land of Israel were celebrated.

Today, the TuBishvat seder is observed in many Jewish households and synagogues. Many partake in the fruits and nuts of Israel, while reflecting on the need for sustainable agriculture. It is recognized that man depends upon the fruits of agriculture.

In recent years, the Tu Bishvat seder has become a popular custom, and many synagogues hold one; it’s an opportunity to eat fruits, nuts and other produce of Israel; to consider the miraculous process by which we sustain our own lives by eating agricultural products; and to explore our responsibility to sustainable agriculture and the planet that feeds us. FRIDAY, APRIL 22: What started as a political movement born out of necessity in response to current events has evolved into a worldwide initiative with deep spiritual connections, as the world celebrates the 46th annual Earth Day. Spearheaded by Sen. Gaylord Nelson in 1970, the Earth Day Network—now a powerful force behind Earth Day and environmental action on several levels—has dubbed this year’s theme, “Trees for the Earth.” Planting enough trees is, according to the organization, one of the best ways to effectively clean our polluted air and effectively assist in several other pressing environmental issues. With a goal of planting 7.8 billion trees, the Earth Day Network calls on volunteers, financial supporters and—on a grassroots level—everyone. The Earth Day Network encourages religious participation by explaining that, “We encourage all people of faith across the globe to join us on Earth Day.”

“In 1970, the year of our first Earth Day, the movement gave voice to an emerging consciousness, channeling human energy toward environmental issues. Forty-six years later, we continue to lead with groundbreaking ideas and by the power of our example.

And so it begins. Today. Right here and right now. Earth Day is more than just a single day — April 22, 2016. It’s bigger than attending a rally and taking a stand.

This Earth Day and beyond, let’s make big stuff happen. Let’s plant 7.8 billion trees for the Earth. Let’s divest from fossil fuels and make cities 100% renewable. Let’s take the momentum from the Paris Climate Summit and build on it.

Let’s start now. And let’s not stop.”
Faith-based resources: Convenient links will take you to statements of concern for the Earth from a host of religious groups. Need some inspiring material to carry with you into your congregation? You’ll find plenty of choices from that online starting point.