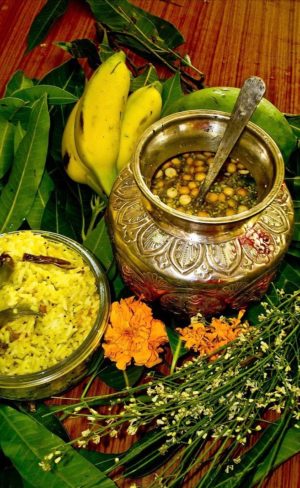 SATURDAY, APRIL 6: The sweet scent of ripe mangoes, aromas of calming jasmine and the Hindu New Year signal spring in regions of India, ushering in Ugadi (also known as Yugadi). In celebrating regions in India and around the world today, devotees gather for Ugadi poetry recitals, dance festivals, sports and youth essay contests. New Year predictions are announced by Brahmin priests, and traditional prayers are offered. Many homes are adorned with mango leaves and women braid fresh jasmine into their hair, toiling over special New Year dishes in anticipation of shared feasts with family and friends.

Did you know? One of the most popular dishes on today’s menu is Ugadi Pacchadi (known also as Bevu Bella), a dish containing several tastes that symbolize the many emotions of life. Most commonly, neem buds and flowers symbolize sadness; jaggery and banana signify happiness; green chili peppers represent anger; salt indicates fear; taramind juice symbolizes disgust; and unripened mango translates to surprise.

Millions of men and women across India base the start of the Saka, or Indian national calendar, on an ancient system that balances both lunar and solar cycles. Derived from Sanskrit as “the beginning of a new age,” the Saka calendar places (Y)ugadi on April 6 this year. Many also believe that Yugadi marks the anniversary of our current era—known as Kali Yuga. According to Hindu legend, Kali Yuga began in 3102 BCE, at the moment Lord Krishna left the world.