Many religious groups are organizing veterans’ events, sometimes on alternative dates. For example, if you’re near Washington D.C., visit the National Cathedral on Sunday, November 15, for a special preacher: the Rev. Dr. David Peters, an Army Reserve Instructor at the U.S. Army Chaplain Center and School.

‘THE WAR TO END ALL WARS’ Frank Buckles (1901-2011) was the last surviving American veteran of World War I. He enlisted in the U.S. Army in 1917 and served with a detachment from Fort Riley, driving ambulances and motorcycles near the front lines in Europe.

The date has somber origins. Around the world, November 11 is remembered as the day an armistice—a cessation of hostilities—went into effect between the Allied nations and Germany, unofficially ending World War I, in 1918. The Treaty of Versailles ending the war was not signed until June 28, 1919. Europe, Britain and the Commonwealth countries commonly observe two minutes of silence at 11 a.m. each November 11; Canada pays tribute with Remembrance Day; the United States marks Veterans Day; and Britain keeps the second Sunday of November, with Remembrance Sunday.

Many new books and documentaries about World War I (1914-1918) have appeared recently, because of centennial milestones. But no World War I veterans are left. The last surviving American veteran, Frank Buckles, died in 2011 and the world’s final WWI veteran, Florence Green, died in the UK in 2012.

DID YOU KNOW? The phrase “war to end all wars,” began with the politically active science fiction writer H.G. Wells who argued sincerely that a defeat of the Axis Powers would end the practice of war. Later, President Wilson would use the phrase and, now, it is largely associated with the U.S. President. The irony is that Wells lived to 1946 and saw his earlier hopes tragically dashed. 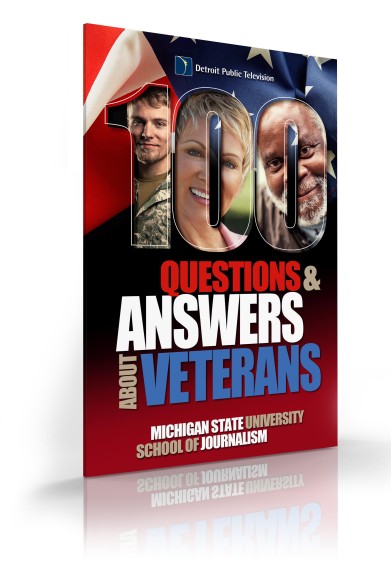 OUR VALUES—Sociologist Dr. Wayne Baker offers a fascinating series on veterans in his OurValues.org column. One of the findings he reports is that veterans actually experience less stress than Americans overall. “Many veterans suffer physical and emotional trauma,” Baker writes. “But, overall, veterans worry less and experience less stress than civilians do. How could this be so?” Read the OurValues.org series to find out.

100 QUESTIONS AND ANSWERS … The Michigan State University School of Journalism’s nationally known “Bias Busters” team has produced a guidebook about veterans, created to help civilians better understand the millions of American veterans. Differences in experience, age and background mean veterans’ perspectives are individual and unique. Yet all face similar questions and assumptions. This guide answers everyday questions that veterans say civilians ask about their experiences, needs, challenges and achievements. It is intended for people in business, schools, government, medicine, law enforcement, human resources and journalism who need a basic grounding.