March of the Living participants. Photo courtesy of Wikimedia Commons

SUNSET WEDNESDAY, MAY 1: An Israeli memorial for the 6 million Jewish deaths during the Holocaust is commemorated worldwide as Yom HaShoah, or Holocaust Remembrance Day. In Israel, state-sponsored and synagogue ceremonies, moments of silence and a March of the Living all paint the picture of this solemn observance.

Also known as “Holocaust and Heroism Remembrance Day” in English, Yom HaShoah has been defined, in recent decades, as having a scope broader than the millions of deaths at the hands of the Nazis and their allies. Today, those who mark this annual observance also remember the Jewish resistance during that era; they celebrate righteous acts in such dangerous times; and they emphasize the meaning of human dignity. (Learn more from the Jewish Virtual Library.)

In Israel, Yom HaShoah is a national memorial day. In 1953, Israeli Prime Minister David Ben-Gurion and Israeli President Yitzhak Ben-Zvi signed the proposal for Yom HaShoah, enacting it as law.

Flags are flown at half mast; sirens blare in the evening and the following morning; services are held at military bases, in schools and by various organizations. (Wikipedia has details.) Public entertainment is not permitted on Yom HaShoah, and radio and television programs focus on the day’s memorial.

Yom Hashoah and Hate Crimes in 2019

Each year, one of the major themes associated with Yom HaShoah is the commitment to never forget what happened in this horrific genocide. In the 1970s and ’80s, American public schools that once ignored the Holocaust in standard lesson plans began to include this chapter of history for all students. Holocaust memorials, including the national museum in Washington D.C., opened to millions of visitors. 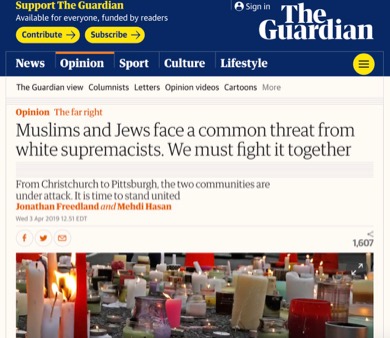 Click this image from Freedland’s and Hasan’s column to visit The Guardian website and read their entire text.

However, a rising tide of right-wing nationalism around the world has poured fresh fuel on smaller extremist groups that resort to violence. Hate crimes have risen against various minority groups, but especially Jews, according to FBI statistics in the U.S. and reports from other countries.

One of the most urgent appeals this spring was issued from the UK by two journalists writing for The Guardian newspaper: Jonathan Freedland and Mehdi Hasan. Together, they published this impassioned column, headlined: Muslims and Jews face a common threat from white supremacists. We must fight it together.

Their column begins this way:

The two of us have been having the exact same conversation for the past decade. About antisemitism and Islamophobia. One of us a Muslim, the other a Jew, we have conducted it in public and in private, on Twitter and on TV. We’ve agreed; we’ve argued; we’ve even wandered off topic to trade tips on how to get through a fast. Now we’ve come together because of the urgent and common threat that we face. Both of our communities are under violent attack from far-right white supremacists.

In Christchurch, New Zealand, last month a white supremacist gunned down 50 Muslims at prayer. In Pittsburgh, Pennsylvania, last October a white supremacist gunned down 11 Jews at prayer. Both killers were clear in their loathing of both Jews and Muslims. Both subscribed to the “great replacement theory,” which casts Muslims and other minorities as “invaders” of western societies and a threat to white, Christian majorities. In this narrative, the supposed invasion is a wicked plot orchestrated by the same hidden hand behind all malign events through world history: the Jews. The point was put concisely in an online remark reposted by the Pittsburgh murderer: “It’s the filthy EVIL jews Bringing the Filthy EVIL Muslims into the Country!!”

This is how our haters see us: Jews and Muslims connected in a joint enterprise to effect a “white genocide.” It is an unhinged and racist conspiracy theory–and it has both of our communities in its murderous sights.

So there can only be one response: Muslims and Jews must stand and fight it together.

Please, consider their appeal and share this column with friends.